From tanks near the White House to the Washington Nationals winning the World Series, DC has had a memorable year. 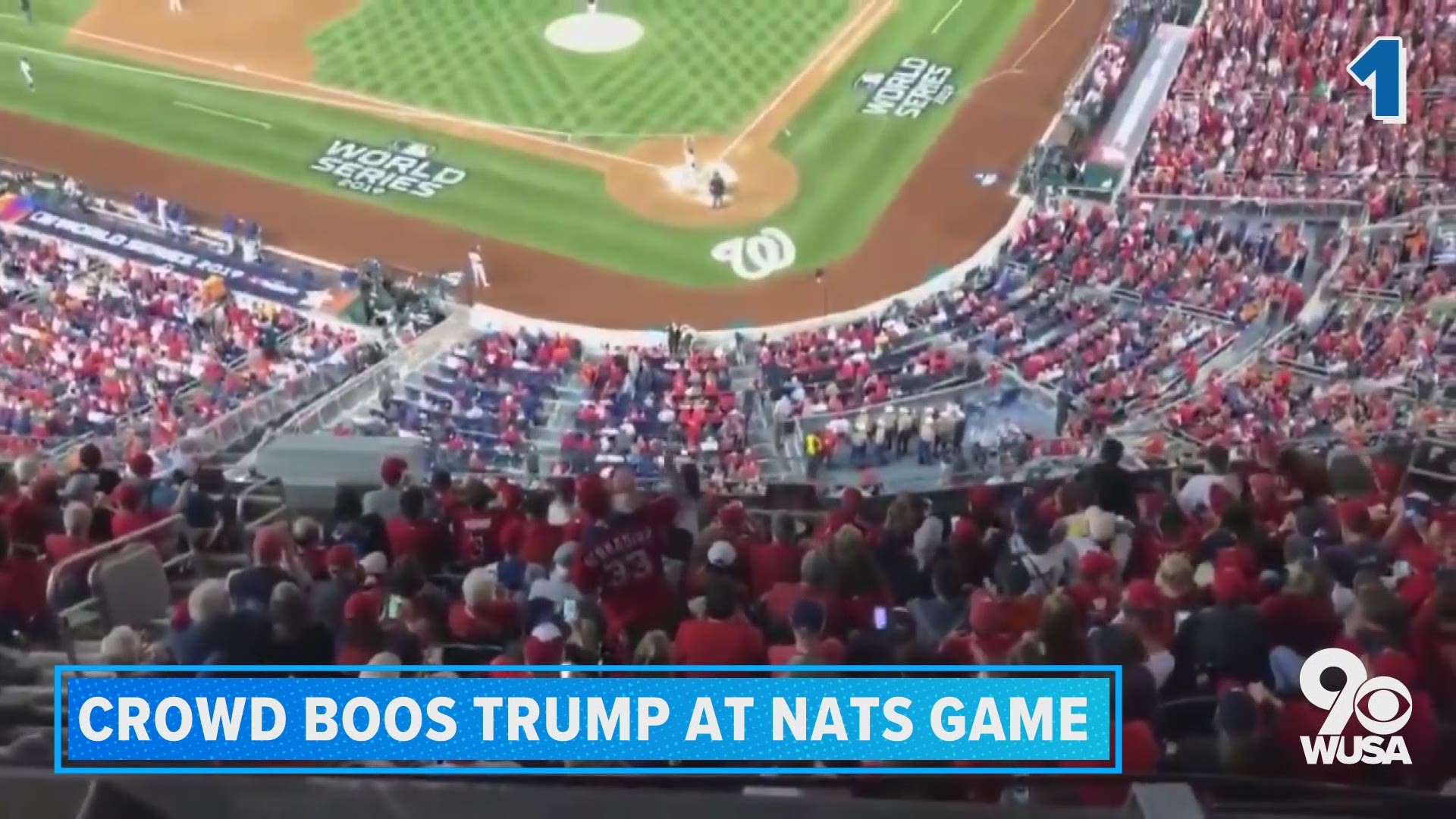 WASHINGTON — This past year has been a whirlwind -- from the Washington Nationals winning the World Series, to impeachment hearings and crime associated with a Popeyes chicken sandwich, D.C. has had a memorable year.

Here are the most-read 15 stories that WUSA9 covered in 2019 -- everything from the good, the bad and the ugly.

It all started in July when the military told D.C. residents not to panic if they saw an armored personnel carrier rolling through their neighborhood. At least two of the Bradley Fighting Vehicles were placed near the Lincoln Memorial in preparation for President Donald Trump’s "Salute to America" Fourth of July event.

The Bradley Fighting Vehicles were shipped from Georgia and weigh roughly 55,200 pounds.

The armored vehicles were part of a larger military-themed celebration the president said includes flyovers by the Navy’s Blue Angels and one of the jetliners used as Air Force One.

At nearly 82 years old, iconic actress, model, fitness guru and activist Jane Fonda moved to D.C. to take part in the fight against climate change and was arrested for it.

U.S. Capitol Police said 16 people were arrested for unlawfully demonstrating on the East Front of the U.S. Capitol. All were charged with D.C. Code 22-1307 crowding, obstructing or incommoding.

Demonstration activity is only allowed in designated areas on U.S. Capitol Grounds, according to the U.S. Capitol Police's website.

We've heard about stealing from gas stations and fast-food restaurants -- even robbing ATMs. But this woman and a teenager stole a plethora of panties and other clothing items from Victoria's Secret.

The duo was caught stuffing the stolen goods into garbage bags. In the video, one of the women curses out the person shooting the cellphone video. She's later heard saying, "I’m doing it for our kids," before running from the store and down the mall corridor.

Our Verify team works hard to get you the answers to questions often circulating your social media feeds. The question: Can diabetics buy $25 'over-the-counter' insulin at Walmart?

"Would you and [your] team please verify this post from Facebook?," a viewer wrote to the Verify team. "If this is not true, I feel so bad for the people who might be duped."

The answer? Yes, but it's technically 'behind-the-counter,' because even though you don't need to show a pharmacist a prescription, you still need to get it from a pharmacist. Currently, the only insulin offered OTC is human Insulin, not analog.

In September, a 21-year-old man was killed and five others were wounded when attackers jumped from the car and began shooting at a group of people in the courtyard of an apartment complex near the intersection of 14th and Columbia Road Northwest around 10 p.m.

At least three of the victims were members of a local "crew," and that four of the six victims had a history of weapons charges filed against them, D.C. Police Chief Peter Newsham said.

Less than 30 minutes later, police were called to the 1300 block of Brentwood Road after receiving multiple calls for a shooting in the area. When police arrived, they found two men and one woman suffering from gunshot wounds.

In all, nine people were shot in two separate incidents in the District in less than 30 minutes that night.

6. Here's how much money the World Series teams could each take home

World Series Champions get a lot of perks: The Commissioner's Trophy, blinged-out new championship rings, a city-wide parade, and of course, bragging rights that they're the best baseball team in the world.

The champs also get a monetary bump in the form of a bonus called a postseason share. So what exactly are the bonus shares that the players receive?

The total of the bonus shares is announced by the MLB following the World Series in what's called a "players' pool," and is based on the amount of total revenue from ticket sales the league receives during the postseason.

And regardless if a team wins or loses, both teams will receive payouts from the MLB for making it to the Series, to begin with.

7. Furloughed workers in tears as they line up for free sandwiches from celebrity chef Jose Andres

Volunteers from celebrity chef Jose Andres' World Central Kitchen fed thousands of people in need in January. But not in some far off flood zone -- right here in Washington at a small storefront at the Navy Memorial on Pennsylvania Avenue.

Many of the furloughed federal workers and contractors said soup, a sandwich and a power bowl can make a huge difference when there's no money coming in.

8. Source: Nationals owners requested they not have to respond to request to sit with President Trump at Game 5

The family who owns the Washington Nationals, the Lerners, asked Major League Baseball that they not be put in a position to respond to any requests that Trump sit with them during Game 5 of the World Series at Nationals Park in D.C.

A representative of the Lerner family made it clear that at no time was a direct request made that the president not be seated next to the Lerner family, but it was made clear that the family did not want to be put in the awkward position of having to respond to a request.

9. Friends of man stabbed to death at Popeyes say it was not over a chicken sandwich

In November, Ricoh McClain, 30, and Kevin Davis, 28, were waiting in line for the newly-released Popeyes chicken sandwich when Davis worked his way through the front of a line of customers waiting for service, police said. Once toward the front of the line, a confrontation started with Davis and McClain.

Seconds later, police said the argument was taken outside to the parking lot and Davis was stabbed. Davis was taken to a nearby hospital with life-threatening injuries and later died.

Many of Davis' friends gathered outside Popeyes to honor him. One friend adamantly said he didn't die over a chicken sandwich.

"They not going to make it that the chicken sandwich the reason that happened to my homie," his friend said. "It was deeper than that."

He didn't know why he was stabbed though, but said finding the answer to that question is not his focus now. He wants to celebrate his life.

"He just came out here with a smile on his face every day, brought joy to everybody’s day, no matter what he went through," the friends said. "Long live KD."

RELATED: Friends of man stabbed to death at Popeyes say it was not over a chicken sandwich

10. Wise: If Ohio State wrestlers who say Jim Jordan knew of sexual abuse are telling the truth, the Congressman needs to go

A mobile billboard circulated the capitol building in November. The truck was sponsored by the Ohio State Accountability Project, which takes aim at those they believe failed to protect OSU students from a sexual predator, a staff physician who molested at least 177 male athletes – many while Jim Jordan was an assistant wrestling coach at the school between 1986 and 1994.

In the past 18 months, more than half a dozen former wrestlers have come forward and said their former coach was aware of the sexual abuse -- and he did nothing.

Montgomery County police released body camera footage of an officer using the N-word while investigating a report of trespassing. The body camera footage showed her speaking with several black men during an incident outside a McDonalds in Silver Spring in May.

"Y'all n*****s been trying to do something," she said, apparently in response to the men being questioned in the video.

"Racist a** b****," someone can be heard in the background replying.

"Uh, nope, that's a quote, those were your words," she responded. "What I'm doing is repeating your words."

Montgomery County Executive Marc Elrich confirmed he spoke with the acting police chief and the department has started an investigation into the incident.

"There are no circumstances that justify what the officer said," Elrich said in a statement Thursday night. "Every time something like this happens it hurts the reputation of all officers, and it works against efforts to build trust in the community."

12. Speed camera hidden behind Porta Potty on I-270 will start issuing citations

Camouflaged behind a portable toilet on the shoulder of Interstate 270, a state-owned mobile unit was deployed to detect speeders to snap away as unsuspecting drivers whizzed by.

The unit was deployed sporadically over a few weeks in January on the shoulder of the southbound lanes of the interstate right before the construction zone at the future Watkins Mill Road interchange with I-270.

There were new signs reminding drivers of the 55 mph speed limit and new signs leading up to the construction zone warning about the presence of speed cameras.

RELATED: Speed camera hidden behind Porta Potty on I-270 will start issuing citations

13. New list names Maryland as worst state in the US to retire

Apparently Maryland is the "worst" place to retire in the United States.

A list from Moneywise notes the state’s great golfing, beaches and proximity to major cities, but cited congested roads, surprise tornadoes and winter storms from the Atlantic as a reason not to retire there.

"Retirees in Maryland are bound to be crabby," Moneywise wrote, citing Kiplinger.

Below are the top five worst states to retire in, per Moneywise's list.

RELATED: New list names Maryland as worst state in the US to retire

Our Verify squad cut through online rumors to get the facts on this one. A viewer who uses the mobile messenger app, Kik, regularly had a question. She said she heard it would be going away Sept. 27.

Verify researchers dug up a tweet from KIK’s CEO and founder, Ted Livingston.

In a blog post he published on Medium.com, Livingston said the company has been going back and forth in a legal battle with the U.S. Securities Exchange Commission over its cryptocurrency called KIN.

The fight with the SEC forced the company to make some hard decisions. So yes, they were shutting down the Kik app and reducing their headcount to a 19-person team.

A new medical cannabis dispensary opened in Prince George’s County in September, and one of its co-owners hoped the business will encourage more people like her to get in the industry.

Bowie native Hope Wiseman, 26, is one of the dispensary's co-owners. Last winter, she received media attention from publications across the nation when her plans to open the dispensary became public.

"But I hope that someone knocks that title right from me as soon as possible," she said. "Because we need more African-Americans in this industry."

Wiseman said Mary and Main is the first African-American owned dispensary to open in Maryland. She added there are a few other minority-owned dispensaries in the state too.

RELATED: These were the most popular videos of 2019

RELATED: Here are the most popular books in D.C. for 2019