On September 11th, 2001, as United Flight 93 aimed toward the U.S. Capitol, the roar of fighter jets ripped through the clear sky near Washington. If the pilots were successful, they would probably not survive. 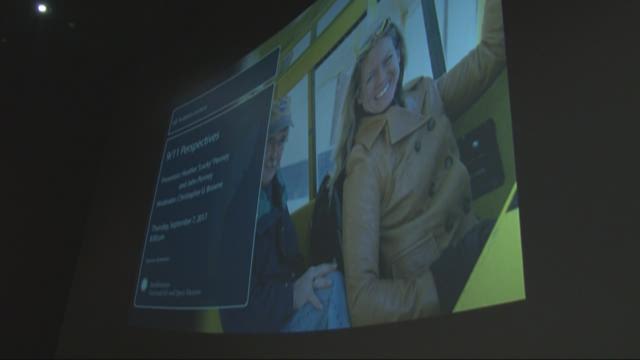 On September 11th, 2001, as United Flight 93 aimed toward the U.S. Capitol, the roar of fighter jets ripped through the clear sky near Washington. If the pilots were successful, they would probably not survive.

“I simply showed up to work that day,” said Heather Penney, then an F-16 fighter pilot in the D.C. Air National Guard. “To essentially be placed in a position to be a kamikaze pilot, it never crossed my mind.”

Her story of courage under fire is one she rarely tells publicly. But last week, Penney told it as part of a lecture series at the Smithsonian National Air & Space Museum. The crowd of hundreds was spellbound as Penney, now a mother of two, insisted she was hardly a hero that day.

That Tuesday morning, Penney’s squadron mates were away on a training mission while she stayed behind at Andrews Air Force Base. But as the attacks on the World Trade Center and the Pentagon were relayed to Heather and her commanding officer, it became clear there was another hijacked flight still airborne.

But, in this more innocent era, the fighter jets sat unarmed. Outfitting them with missiles would have taken an hour, said Penney. So she and her flight lead took off anyway. They agreed to ram into United Flight 93. Heather would aim for the tail.

“So if I gave my life, that would be the purpose of my life,” Penney told WUSA9, holding back tears.

Ultimately, the passengers of Flight 93 took down the plane before Penney could. She says they are the real heroes. Sixteen years later, she tells her story to be a harbinger of hope.

“I think it’s something that deep down inside of us is really just about being Americans and being humans,” said Penney. “It transcends any profession, it transcends any oath to help out our fellows.”