Playing through injury | How this 'SmartGuitar' can help musicians train, avoid long-term damage

The guitar works with sensors that go directly into its fretboard. 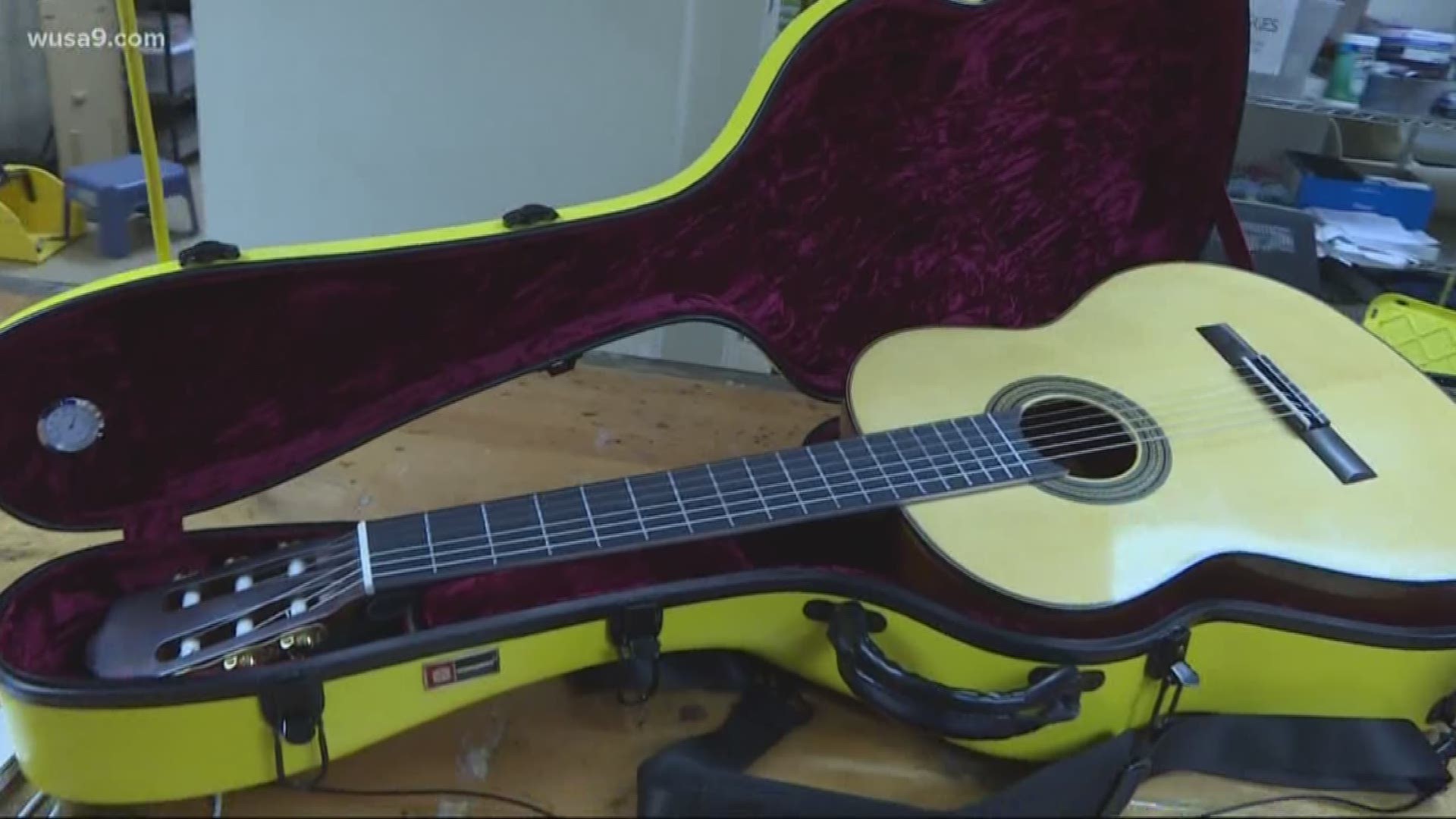 BALTIMORE — You likely know the phrase: 'art is pain,' especially when it comes to music. But that can be taken quite literally for musicians.

What you might be unaware of, though, is about 50 to 76% of professional musicians have reported getting musculoskeletal injuries from playing, according to the U.S. Bureau of Labor Statistics. But there’s a team in Baltimore working to try and stop musicians from having to suffer so much for their art.

Serap Bastepe-Gray, a medical doctor and musician, along with a team of mechanical engineering students at Johns Hopkins University, came together to create a special device that not only would accomplish their goal, but fight against a certain perception.

“A stigma about being injured if you're a musician,” Bastepe-Gray said. “People immediately associate it with bad technique and less talent.”

Bastepe-Gray is also the co-founder of the Johns Hopkins Center for Music and Medicine and hopes the 'SmartGuitar' can blend medicine and music into something that prevents long-term problems.

Tendinitis, strains, and nerve pinches are some of the injuries a string musician can deal with. Constantly gripping with varying degrees of pressure can lead to more issues than just injuries in your extremities.

“My biggest thing was too much tension overall throughout my body,” Greg Hays said. “One day it would be my back, my lower back, another day it would be this arm-- I would just keep so tense.”

Credit: Gio Insignares
Greg Hays has been playing guitar for most of his life and is currently studying classical guitar at the Peabody Institute of Johns Hopkins University.

Hays has played guitar for most of his life and is currently studying classical guitar at the Peabody Institute of Johns Hopkins University. He practices with the same frequency and attention to detail that would commonly be associated with a high-end athlete. But without something to highlight any potential damage, he’s left to self-diagnose and treat any problems.

“It’s extremely hard because there’s nothing tangible to see what’s right,” Hays said. “You can use your ear if you’re not pushing enough because it makes a terrible sound, but between not pushing enough and pushing too hard, it’s really hard to break that habit.”

Credit: Gio Insignares
The SmartGuitar's sensors are built and placed into the fretboard of a regular guitar, making the instrument operate as it normally would.

That’s where the SmartGuitar comes back into play. Its creation involves sensors that go directly into the fretboard of a guitar. From there, those sensors measure how much pressure is being applied – finger by finger – while a musician plays. The results are then shared on an adjacent screen with green pop-ups equaling appropriate pressure and red equaling too much.

“What I realized was that the process that will put an injured musician back onto stage is the therapy,” Bastepe-Gray said.

“Especially when you’ve been playing for a while, you are kind of stuck in your way, and you want to just power through… but we can’t really power through,” Hays added. “We have to really take a step back and it takes a lot of focus.”

Ultimately, the SmartGuitar takes a scientific approach to an athletic problem. Additionally, it’s meant to serve as a teaching tool – emphasizing motor skills and decreasing exposure to physical stresses.

Credit: Gio Insignares
After initial designs compromised the musical integrity of the instrument, this new design for the sensors allows for musicians to play without issue.

“Well it was a relief because I realized I wasn’t always over-pressing,” Hays said. “It was only very specific points in each piece, so I didn’t have to overhaul my whole technique, just little spots in each piece.

For Hays, that relief turns into excitement. He knows he can play a piece he’s always wanted to play, without worrying about any pain.

Ultimately, the goal for the team is to change the world in some small way and enable new things that are not possible. Their hope is this will be the first instrument to open that kind of perspective.

Right now, the plan is to get the SmartGuitar out to market for anyone to use, then focus on building more “smart” instruments, like a SmartCello and SmartViolin, in the future.

RELATED: DC native creates fight song to cheer on the Nats in the World Series #ForTheCulture