Nearly 60% of high school teachers throughout DCPS said they felt pressure by administrators to pass students or change grades. 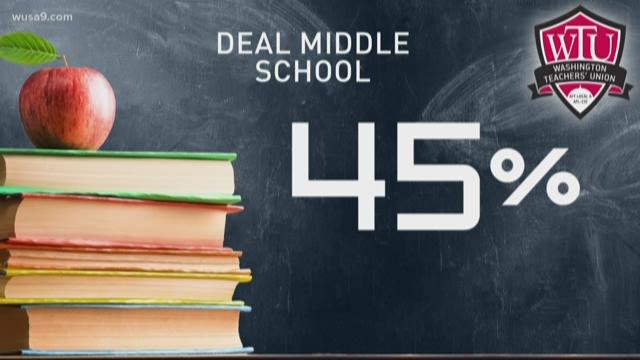 The Washington Teachers’ Union and EmpowerEd, a group of public and charter school teachers, emailed their 10 minute survey to all 5200 teachers in the system.

About 600 responded; half were high school teachers who say this problem is wide spread.

Nearly 60% of high school teachers throughout DCPS said they felt pressure by administrators to pass students or change grades.

The schools that jump out were Dunbar, Roosevelt and Cardozo High Schools at 93 percent , 79 percent and 71 percent respectively.

Almost three in 10 high school teachers also report that when they put in grades and attendance records and then someone else in the school changed them.

But it’s happening in middle schools too. Forty-five percent of teachers at Alice Deal Middle School in Northwest, D.C. said that happened to them.

When WUSA9’s Delia Gonçalves asked the teachers’ union president Elizabeth Davis if Education Reform failed the students of DCPS she replied, “Yes, I would say the achievement gap tells us that.”

Davis said she is willing to work with Chancellor Antwan Wilson to fix what she calls systemic problems at DCPS.

“But how much control does the Chancellor have since education reform put control in the Mayor’s realm?,” asked Gonçalves.

“That’s a very good question and of course as you noted the education reform strategies implemented in 2007 began with mayoral control so we may also have to examine the effect mayoral control had on the progress in our schools," said Davis.

In the survey’s comment section one teacher said if a student just writes down their name on a paper, they should at least get a 50% because they’re told that's considered “an attempt.”

“At DCPS, we are committed to putting our students first, focusing on equity and excellence and always looking for ways to improve. The Chancellor personally meets with teachers at weekly faculty meetings, monthly teacher cabinet meetings, and school visits. DCPS teachers also engage leaders on everything from IMPACT to professional development. This is all with the goal of implementing policies and procedures that help ensure students succeed, creating an environment where kids want to learn, and holding everyone accountable to make sure the entire system works.”