Their final legislative session is on Tuesday. Here's what to watch for. 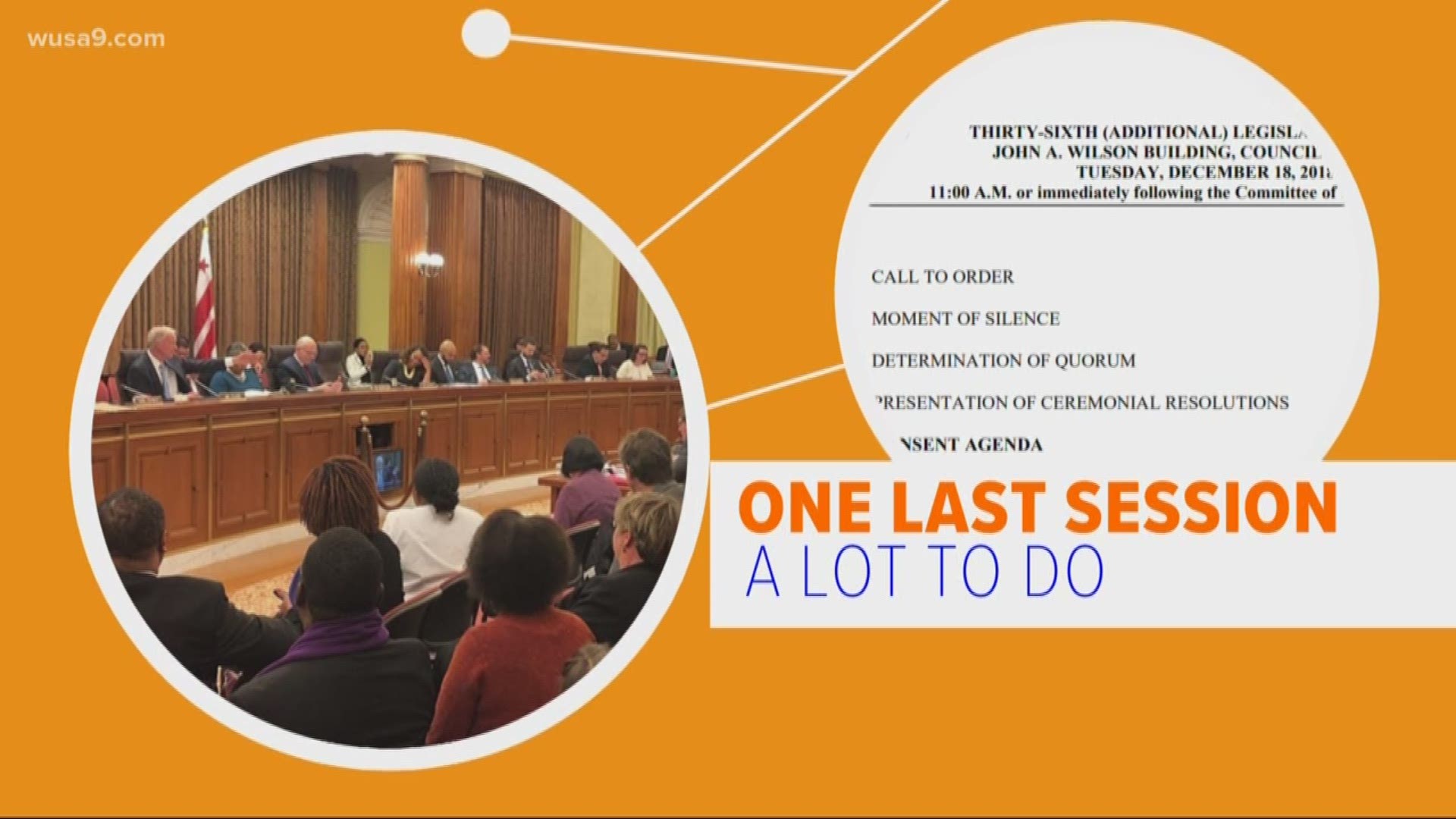 WASHINGTON -- D.C. City Council’s final legislative session for the year will take place on Tuesday, December 18, wrapping up a legislative year that saw a lot of action in the past few months.

The previous legislative session, on December 4, saw the adoption of legislation to decriminalize fare evasion, the delegation of internet sales tax towards lowering commercial property tax, and the postponement of an important vote on a Southeast, D.C. hospital.

Tuesday’s session will revisit the hospital bill, a bill on firearms, sports wagering, and more.

Here are some bills to watch ahead of the legislative session:

Sponsored by Council Member Jack Evans, the bill would legalize online and in-person sports gambling. An amendment by Council member Allen removed RFK from the list of sites where a sports wagering facility would be as the land it is on is owned by the National Park Service and RFK no longer houses a professional team. The Supreme Court ruled in May that states may decide if they want to implement sports betting or not.

Council members Brianne Nadeau and David Grosso dissented in the first vote. It’s not yet clear how much money would be generated and where revenue would go, with some members advocating for early childhood development programs and the arts.

This bill, which would be in its final reading, would be one of the strongest climate bills in the nation. Among other things, it mandates 100 percent clean electricity by 2032 and offer incentives for electric cars. It would remove restrictions on energy efficiency measures and expands the use of the Sustainable Energy Trust Fund.

A bill to bring more public restroom facilities to the District will undergo a final vote on Tuesday after passing unanimously in the last legislative session. An advocacy group made up of people experiencing homelessness or formerly experiencing homelessness, The People for Fairness Coalition, has advocated for the bill. It would create a working group to oversee the pilot program, with one part creating either one or two public restrooms in locations of need throughout the city. The second part would encourage private businesses to make their restrooms available for free.

This measure looks to expedite the process that will ultimately result in the construction of a new hospital on the St. Elizabeth's East Campus. Currently, George Washington University Hospital will be responsible for managing the facility, prompting concerns by Howard University – which also bid on the project – that their clinical program will suffer. The bill was postponed in the previous legislative session, amid the attendance of concerned Howard University students. Council member Trayon White introduced an amendment that would allow Howard to transition some of its clinical and teaching operations to the new hospital. The measure was adopted. The bill will be given a final reading and vote on Tuesday.

An additional bill regarding the hospital will also undergo a final vote on Tuesday. It’ll establish an East Fund grocery and retail incentive fund to attract more grocery stores to the area as well as create stores to provide affordable groceries and retail options. Ward 7 and 8 are considered food deserts and recently Lyft and Martha’s Table teamed up to provide discounted rides for families to grocery stores in the area.

This bill was voted on unanimously on first reading December 4 and will undergo a final reading and vote on Tuesday. It would ban bump stocks, heightens jail sentences for offenders of gun offenses, and introduce a red flag law, thanks to council member Nadeau.

The red flag law, which exists already in Maryland, gives family members, physicians, officers and others the ability to file a petition to have a gun removed from an individual they deem a danger to others or themselves. A judge can approve the petition and the firearm could be removed within hours. Though the bill is not in response to this incident, recently, a D.C. man who told relatives that he hated Jewish and black people was arrested on gun charges after they went to the authorities with concerns about his views. Various guns and ammunition were seized from his home.

Parking fines might get more expensive in the District as the Repeat Parking Violations Amendment Act of 2018 undergoes a final vote after being passed unanimously on its first vote. The bill would create pilot zones for repeating parking violators where the mayor may establish escalating fines if repeated parking violations are identified within the zones. The next step would be a report by the mayor on mitigating these violations within one year of legislation adoption.

This push comes amid efforts by Mayor Bowser and DDOT to tighten regulations on drivers in the District. For those attempting to find parking in the District, DDOT established piloted no parking-zones in popular nightlife areas around the city to allow for easier ride share pick-up and drop-off. Violators face being towed.

Seemingly not on the agenda is a proposed legislation to allow 16- and 17-year-olds to vote in the District. The bill was postponed two legislative sessions prior, amid the attendance of engaged teens on the issue. However, a bill that would require notifications for non-incarcerated individuals with felonies on their voting rights will undergo a final vote.

Additionally, a bill that would symbolically name the 300 block of E Street, Southwest “Hidden Figures Way,” in honor of the historic women who contributed to NASA’s space program, will undergo a final vote on Tuesday. The movie Hidden Figures came out in 2017, showcasing their advancements.

The legislative meeting will take place immediately following the committee as a whole meeting.