The person she loved, who she says loved her, allegedly tried to kill her by setting her on fire. 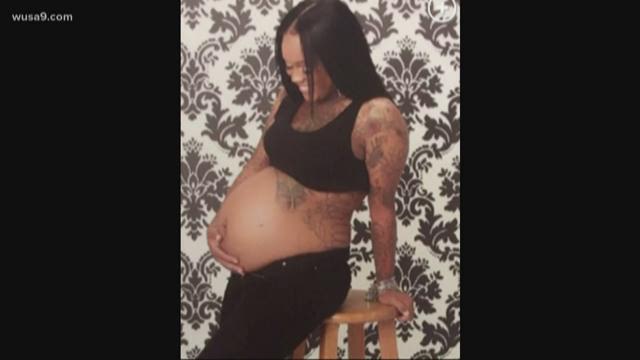 The odds were against her. She wasn’t supposed to live. The person she loved, who she says loved her, allegedly tried to kill her by setting her on fire.

But, somehow, someway, Andrea "Drea" Grinage lived. For the first time, she’s letting down her guard, and talked to WUSA9 anchor and reporter Debra Alfarone.

She was 30 years old, a mom of two boys, and she said she had been in an on-and-off relationship with her boyfriend, 34-year-old Laquinn Phillips, for about seven years. She was more than seven months pregnant with Phillips’ baby.

Police say on the morning of September 8th, Phillips poured a flammable liquid on Grinage and set her on fire in her Capitol Heights apartment. She said Phillips' didn't want the baby.

When paramedics arrived Drea filled them in.

"I told them I'm about seven and a half months pregnant and I said 'just save my baby.' I wanted her to at least have a chance, I felt like I had lived and and I wanted my baby to have a chance to live. And that was why I didn't abort her in the beginning. I was pressured into that, and I chose otherwise," she said.

Drea's family said doctors at MedStar Washington Hospital Center did an emergency C-section. Baby Aaliyah Journey survived. As she was starting her life, it looked like Drea’s could be ending.

She was burned more than 70 percent of her body. She was in critical condition. She lied in bed in ICU for two months before a small miracle occurred, she spoke. She got to meet baby Journey. But, when she came to, she said the pain was excruciating.

RELATED: Baby of pregnant woman set on fire will go home with family

Andrea’s had 11 surgeries. She’ll have a lot more.

Relearning to do simple things is a struggle. Getting dressed can take an hour, if Andrea can do it at all. Taking care of her burned skin is practically an all day job, washing, putting on lotion, changing her compression garments.

Andrea’s now walking, but she drags one leg. She also doesn’t have full use of one hand. She goes to physical therapy twice a week.

"Nobody expected me to survive. It's crazy for me to even think that I'm here now doing what I'm doing," she said.

Drea sees a therapist twice a week too. Her life is a series of appointments, medication, wrangling with insurance. A far cry from her life as an independent mom of two and medical assistant.

"God saved my life, he spared my life," she said.

Laquinn Phillip's trial is coming up. Andrea can’t say all she wants to.

Debra Alfarone: "You had no idea?"

Drea Grinage: "No, I didn't see this coming. Not the person I loved the most, and I thought loved me."

Drea said, and records show, she took out a protective order against Phillips in April 2017, five months before the day she was burned.

"I went through a lot. I was treated so mean and disrespectful and it was new to me. And I was hoping that things would have got better. Not worse," Drea shares. "Because at some point in my life, there was nothing nobody could have said or did that made me feel like this man didn't love me.....this same person is like I hope you die."

DA: "Did you ex hit you or physically assault you before that?

DG: "Not going to answer that. He deserves to be prosecuted though to pay for what he's done."

"It's never too late to walk away because at any given day tragedy can happen, it can strike," she said.

"If a man is putting his hands on you or verbally abusing you because people think that's love and that's not love. Love won't put you down, love won't hurt you," she said.

DA: "Why do you want to tell your story?"

DG: "I was given a second chance to maybe save somebody else. And, even if it's just one person, I feel like that's what I'm gonna do."

Drea has many scars, she's not ready to show them publicly. She has a new tattoo she does want to share.

"My scars are covered for the most part," she said. "Those (pointing to her hand) are the only ones that I can't cover and I got it (the tattoo) so close to that people will know that the purple ribbon is for domestic violence survivor and when I see the ribbon I see my scars. It's not a reminder of what I went through, but what I’ve gone through, what I’m getting through."

This has affected her entire family. Drea’s oldest son, Adrian, started a movement. He calls it "Drea Strong." He sells buttons and t-shirts to bring awareness to domestic violence. He’s 15.

Her 9-year-old son Jordan is always by her side. Then there’s baby Journey, now 5 months old. The family says she's healthy and doing great.

This is what Drea has to say about Phillips, "To hate him is to hate my daughter. And I can never feel no ill feelings toward her, because she look just like him. Every time she smile you know, flare up her nose, she looks like him...I just think that overall, I'm hurt, I'm shocked but I'm not angry. I'm not hateful."

"I want to live, I think I want more for myself now that I did before," she said. "I am grateful. I have a different outlook on life I'm so happy to be here. And like I said, I want to help as many people as I can but if I can just help one person. I feel like my job is done."

She adds, "I'm just hoping that through my journey that I'm able to help somebody else."

Phillips is charged with attempted first and second-degree murder, arson and assault. He’ll be back in court on March 29th. Police also arrested 27-year-old Jonathan Miller of Temple Hills as part of this crime.

If you need help from a violent relationship, here are some organizations you can reach out to: