DC company creates device as a safer way to prescribe, distribute and use opioids

Forty-six people die every day from opioid overdoses in America, according to the CDC. This device would be prescribed alongside a patient's medication.

WASHINGTON — Sitting on the corner of 34th and Prospect Streets in Georgetown is the massive Halcyon House, a building with a litany of expansive halls and rooms.

Inside one of those rooms is the office of a D.C. company determined to fight the opioid crisis. The weapon of choice is the size of a prescription pill bottle.

Pilleve has designed a smart pill dispenser that aims to prevent prescription opioid abuse and addiction. It accomplishes that goal by monitoring pill usage, along with pain levels and mood, then sending that data back to doctors.

“Monitoring pill usage is manageable in many ways, but we needed to monitor accurately,” co-founder and CEO Yossuf Al-Banawi said.

Forty-six people die every day from overdoses involving prescription opioids, according to the Centers for Disease Control and Prevention. Two of the states where death rates were the highest from prescription opioids aren’t far from Washington, D.C. – Maryland and West Virginia.

RELATED: After bankruptcy filing, Purdue Pharma may not be off hook

Statistics that daunting present a problem with no obvious solution. As a result, Al-Banawi founded Pilleve alongside Gautam Chebrolu. Both have felt the struggles of the opioid crisis first-hand. Chebrolu dealt with a familiar history of substance abuse and Al-Banawi struggled personally, as well. 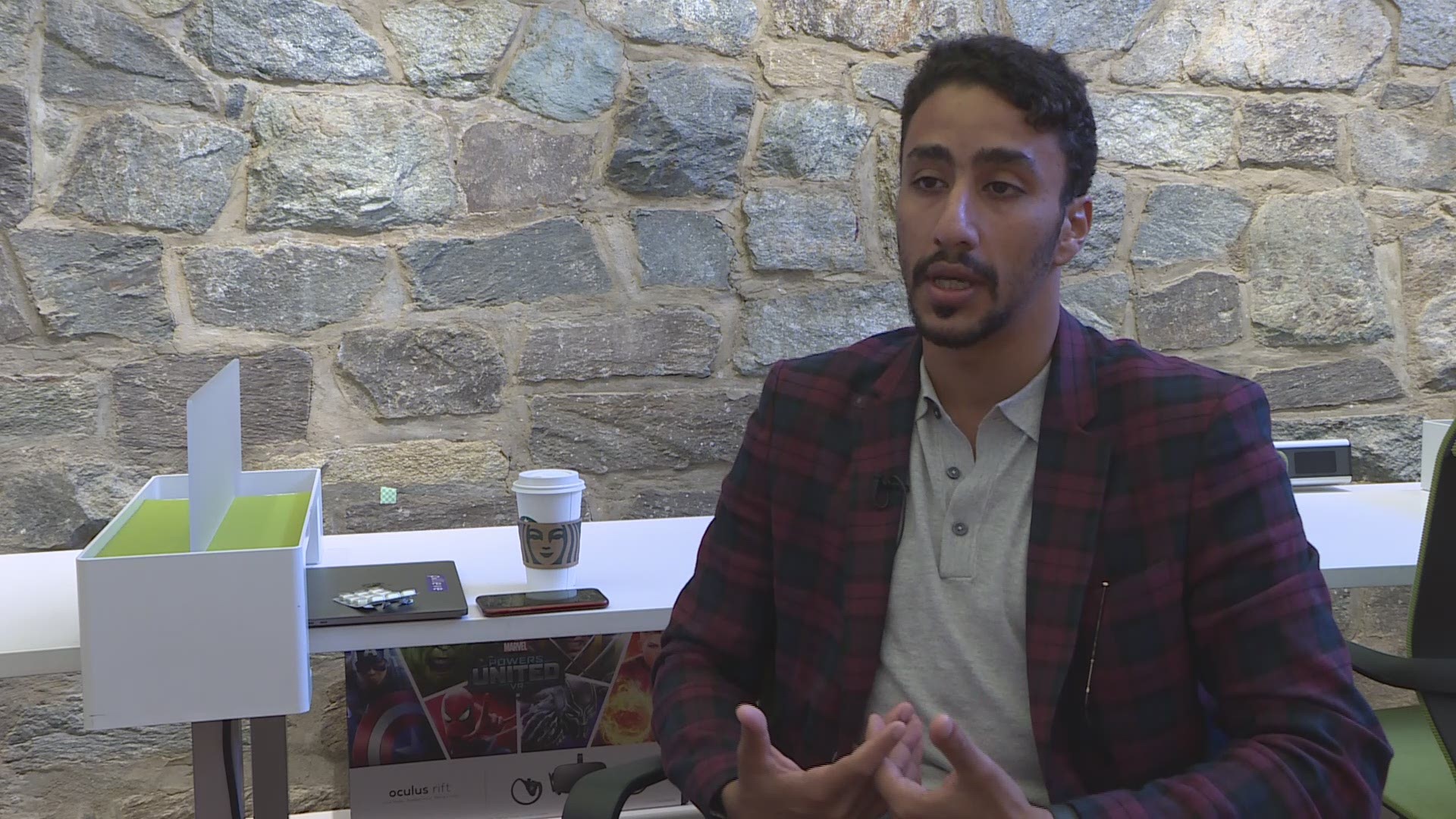 “At 14, I started misusing substances and just like any other teen, you don’t really think about it in that way and you don’t expect it to happen to you,” Al-Banawi said. “But I was very lucky because I got a series of interventions that led to my recovery.”

Prior to starting the company, both men engaged in volunteer work at a rehabilitation center for about two years. The goal was to understand the problem before figuring out a solution. From there, the idea took shape.

“It was almost like a sense of responsibility – so for us, it’s a spiritual feeling behind it,” Al-Banawi said. “In a sense, it was bound to happen because this is why we’re here.”

Credit: Gio Insignares
Co-founders Yossuf Al-Banawi and Gautam Chebrolu founded Pilleve after dealing with their own opioid struggles. They did volunteer work for about two years to try and understand the problem in order to solve it.

The device works a buffer between a patient and their pills. It attaches to the top of the typical orange bottles anyone gets at the pharmacy, acting as a locked cap. To access the bottle, users log in to the company’s app, detail their pain levels and other concerns, scan the QR code, then dispense a pill. How much a patient takes is monitored by the patient and the doctor all through the app.

Pilleve’s device won’t be given directly to patients, though. The company works exclusively with care providers, who would prescribe the device alongside the necessary medication, then the patient picks it up from the pharmacy.

“We’re not saying we’re going to prevent overdoses. We’re going to make it for certain patients to abuse the medication. We’re going to help those who need pain for chronic pain – to get it easier and more efficiently.”