The president, who called himself "the king of debt," has threatened to sue the Target Center over a bill for security. He's never paid any of his DC expenses. 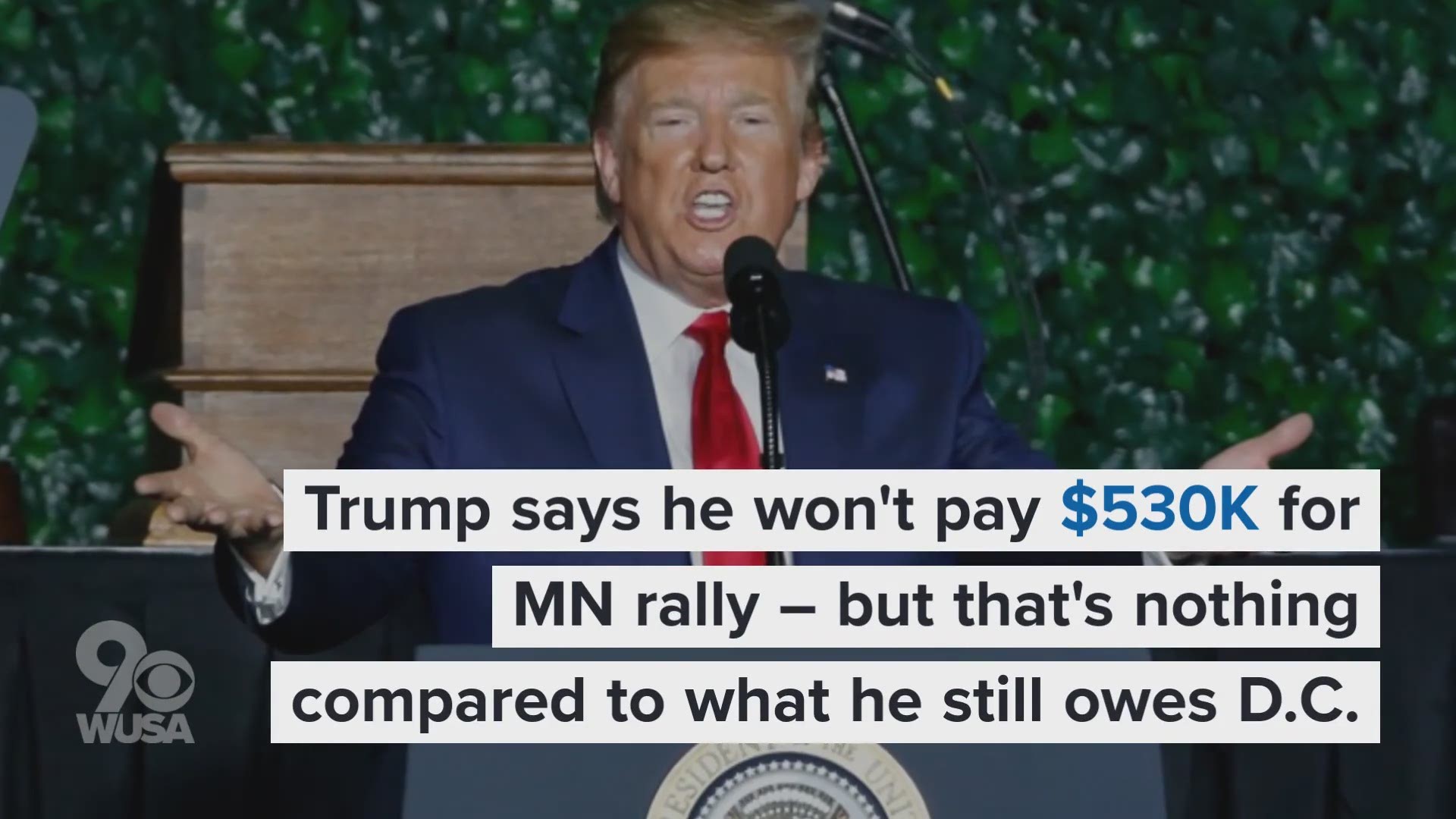 WASHINGTON — President Donald Trump took to Twitter Tuesday to accuse the mayor of Minneapolis of trying to “stifle free speech” over the city’s $530,000 bill for security at a Trump campaign rally planned for later this week.

In a letter posted Monday, the Trump campaign said the Target Center, where the president will hold a re-election rally on Thursday, is trying to pass along the city’s security bill. The Washington Post reported Tuesday that the city estimated direct public safety costs at $400,000 and an additional $130,000 for traffic control.

The campaign’s letter said the U.S. Secret Service is “solely responsible” for coordinating security at the president’s rallies, and also threatened “court action” if the Target Center withholds use of the arena.

“We are well aware of [Minneapolis] Mayor [Jacob] Frey’s vocal partisan opposition to President Trump and calls to disrupt the rally,” the letter says. “This last-minute squeeze seems to be nothing but a pretextual political effort with serious First Amendment ramifications.”

Minneapolis Mayor Jacob Frey, a Democrat, responded on Twitter Tuesday morning, telling President Trump, “Welcome to Minneapolis where we pay our bills, we govern with integrity, and we love all of our neighbors.”

Trump has a long history of being accused of not paying his bills. A 2016 investigation by USA Today found hundreds of liens against Trump companies by contractors who said they weren’t paid, along with dozens of lawsuits seeking unpaid bills. In March, Trump’s former personal lawyer, Michael Cohen, sued the president for millions of dollars in unpaid legal fees. And Trump himself has boasted about the tactics he uses to get out of paying what he owes, including describing himself to CBS News anchor Norah O’Donnell as “the king of debt.”

Those debts are particularly pronounced in Washington, D.C., where Trump owes an estimated $9 million in unpaid fees between his 2017 presidential inauguration and the Salute to America Fourth of July festivities this summer.

Mayor Muriel Bowser has said Trump’s unpaid bills are a prime contributor to the city’s emergency fund being $6 million in the hole. Bowser said Congress did provide $13 million over the last few years to cover D.C.'s emergency fund, however, the city's annual expenses – plus the inauguration – add up to nearly $16.5 million. 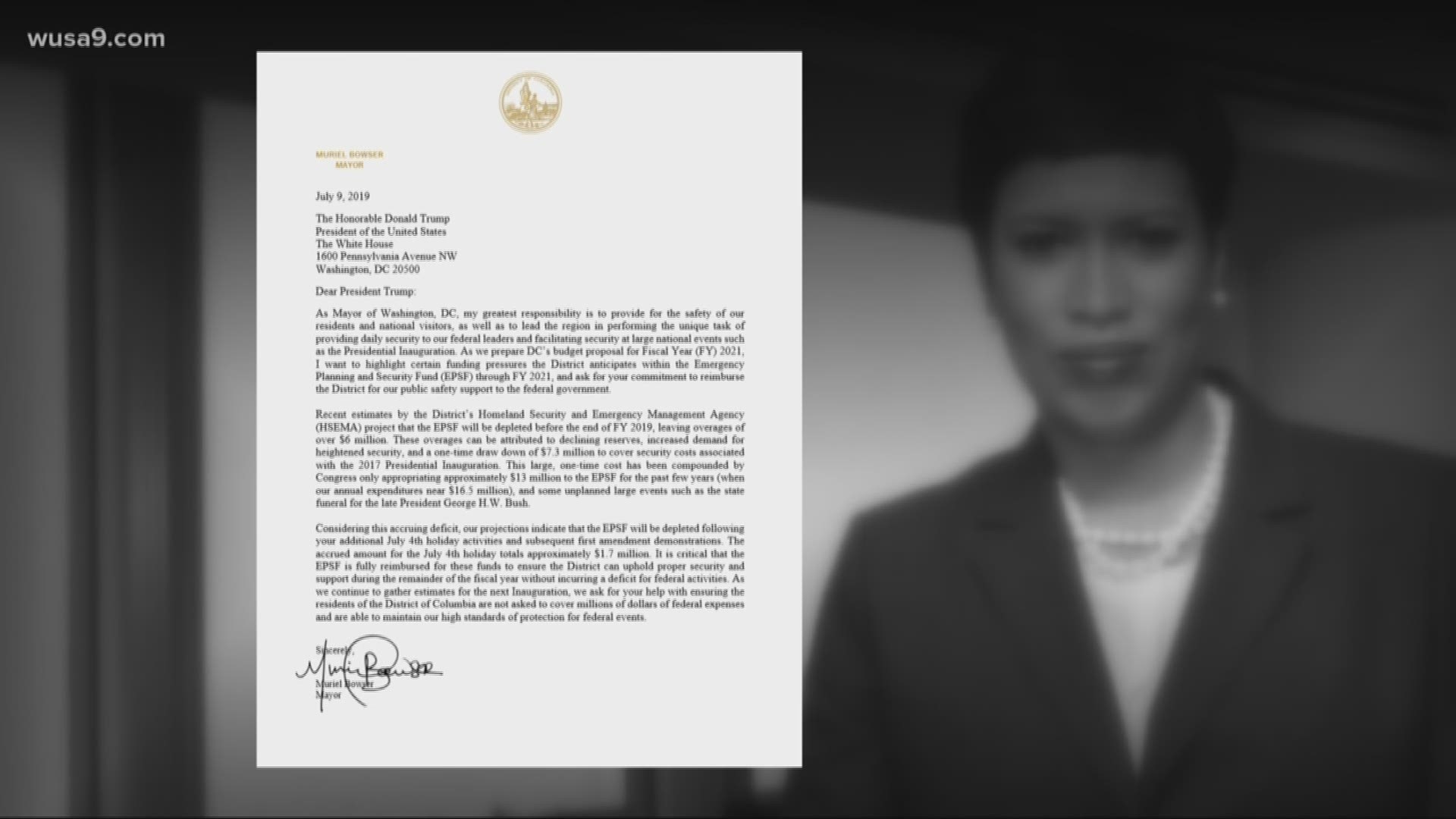 In July, Bowser sent Trump a letter asking him to pay his bills.

“As we continue to gather estimates for the next Inauguration, we ask for your help with ensuring the residents of the District of Columbia are not asked to cover millions of dollars of federal expenses and are able to maintain our high standards of protection for federal events,” Bowser wrote.

A spokesman for the Mayor’s Office said Tuesday the city has still not received any payment on the outstanding debt or any response to the mayor’s July letter.