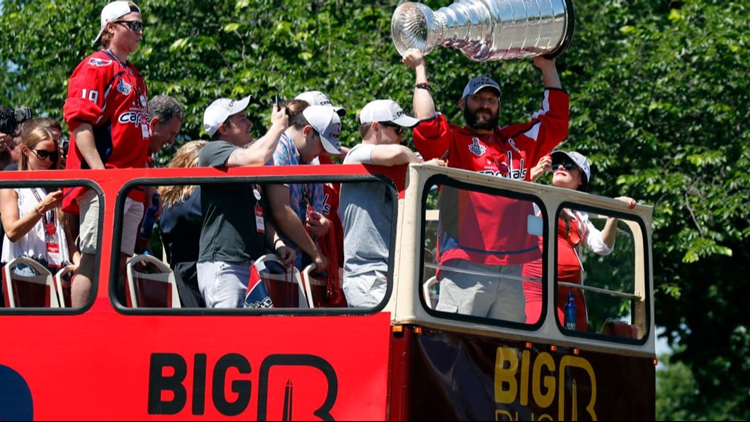 Alex Oveckin and the Stanley cup made a stop today in Southeast, D.C. on Friday to visit with the Fort Dupont Cannons.

The group practices at the Fort Dupont Ice Arena located in Ward 7. It's the only public indoor ice skating rink in D.C.

The program is changing the local hockey landscape.

"I like when you get to score on the goalies," said Justic Tyree, age 10.

Tyree is loving his first year playing hockey on the Fort Dupont Cannons.

In this short time, he hasn't only learned about the game, he's also picked up some important life lessons.

"You have to work hard to be good. I pick up my stick and start stick handling every day," said Tyree.

"He was so excited and so enthused to learn it all. He was all eyes, all ears, all listening unlike at home," said Leathey Chandler, his mom.

Mom says since he has picked up the stick, he's been picking up a pencil a lot more often too.

Mom says she recognizes minority players are underrepresented in the National Hockey League. Out of the 27 player on the Capitals, only 2 are Black.

RELATED: Ovechkin and the Stanley Cup take a thank you tour

According to the 2017 report by Demographic Partitions, 92 percent of hockey fans are white.

"People oftentimes ask me, 'is he playing hockey?'" said Chandler. "I say, 'yes, he can do anything.'"

Mom says she is thrilled the Fort Dupont Ice Area is embracing minority players in Ward 7.

She said she is thankful for players like Alex Ovechkin who are making time to meet and inspire the kids here.

"I was just amazed," said Tyree.

The Stanley Cup is bringing the community together and inspiring the next generation of champions.