One year later, families search for clues in summer murders 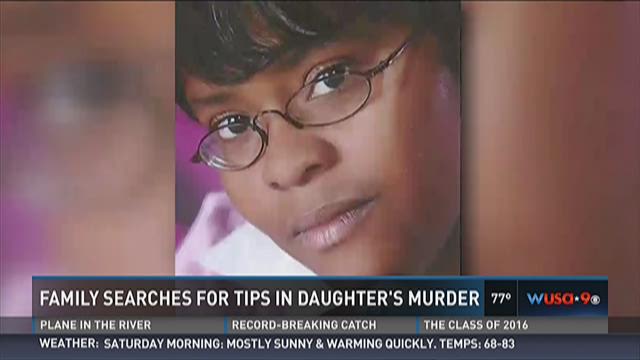 WASHINGTON (WUSA9) -- The parents of two of the District’s most high-profile murder victims killed in last summer’s violent early months took to the streets of Southeast DC on Friday night, hoping to generate new clues that might help solve their daughters’ murders.

"If you know something, if you’ve seen something, say something,” Ken McClinton, the father of journalist Charnice Milton told WUSA9. “Because just the little bit that you know might be the big piece necessary to put the puzzle together to solve this case.”

McClinton and his wife Francine Milton organized the evening event on the corner of Good Hope Road and Naylor Road, handing out flyers with their daughter’s picture on it, along with phone numbers [202-645-9600] for the homicide detectives working to solve her case.

Police believe Milton was not the intended target of the bullets fired on this same corner last year. Her assailants are believed to have fled on dirt bikes after the shooting.

In that, she shares another tragic commonality with the other victim represented at the event on Friday night, 31 year-old Tamara Gliss.

Gliss was struck by gunfire during a Memorial Day barbeque in Shaw, surrounded by dozens of witnesses. The shooters are also said to have fled on dirt bikes. No suspects have been identified in either case.

On Thursday, MPD Chief Cathy Lanier held a news conference at the same location, urging more people to come forward with information to build on what detectives had already gathered.

“The bits and pieces that people are giving us... we just need a little more,” Chief Lanier said.

McClinton said he doesn’t blame police for the difficulty in solving his daughter’s murder, but rather a culture of apathy and silence when it comes to murder in DC.

“When you shut your door and close your eyes and say openly in your heart ‘Listen, I’m not gonna get involved, its not my baby. You have actually destroyed southeast Washington D.C.,’” he said.