Officer William "Billy" Evans' daughter could be seen wiping the tears from her mother's eyes, while her brother sat next to her wearing their father's police hat. 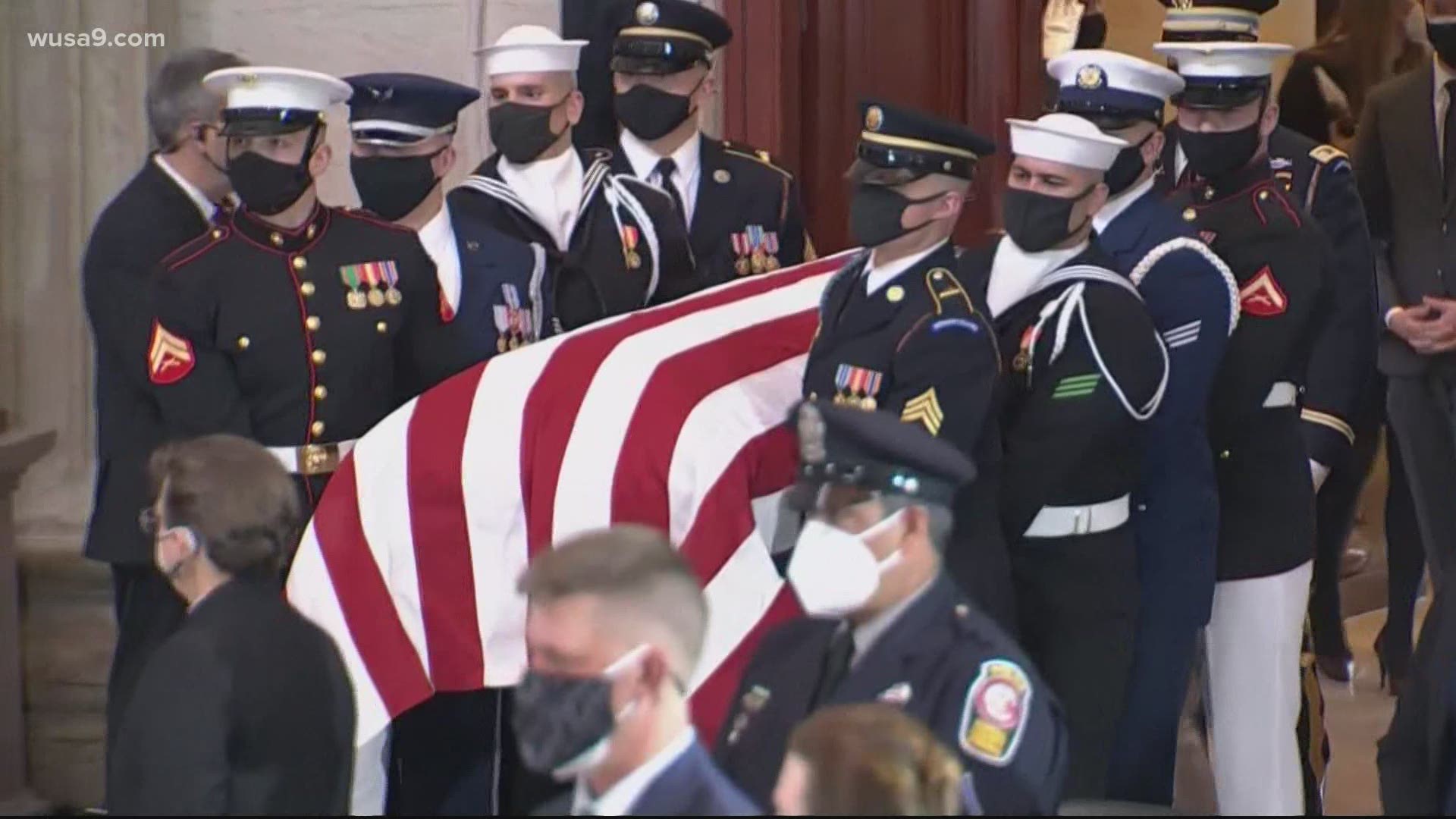 WASHINGTON — There were many heartfelt moments during the ceremony that honored Capitol Police Officer William "Billy" Evans, but it was the few seconds of his young daughter comforting her mother that encapsulated the emotional toll of his loss.

In honor of his life and service to law enforcement, Evans' casket was placed in the Capitol Rotunda Tuesday after he was killed while trying to protect the Capitol almost two weeks ago.

Once his casket was placed in position with the U.S. Capitol Police ceremonial unit guarding over it, Evans' 9-year-old son Logan Evans could be seen wearing his father's police hat while holding a teddy bear. Next to him was his 7-year-old sister Abigail Evans, who could be spotted embracing her mother Shannon Evans throughout the ceremony.

A fitting symbol of honor from Ofc. Billy Evans' son Logan as he wears a police hat once the casket was placed in position in the Rotunda. @wusa9 pic.twitter.com/cKf6BuNDxW

As the U.S. Army Chorus Quartet sang "Bridge Over Troubled Water," cameras inside captured Abigail Evans comforting her mother and seemingly saying something to her before wiping the tears from her eyes. It was a simple and beautiful yet gut-wrenching gesture of the reality the family is now forced to face.

Right across from the family was President Joe Biden, who was also seen picking up the toy Evans' daughter dropped during the ceremony.

"I didn't know Billy, but I knew Billy," President Biden said in a speech, describing described how Evans had the same character as the type of boys he grew up with by keeping his word and always having your back.

In front of Congressional leaders, Biden reflected on losing his own children while he offered words of condolences to the Evans family, including his mother who was also in attendance.

"Your son, your husband, your brother, your dad was a hero," Biden said. "You're going to make it by holding each other together and most importantly by holding Logan and Abigail as tightly as you can."

The 41-year-old Capitol Police officer was known to love his children, play jokes and pranks and proudly fulfill his role as a brother in blue.

"He carried the badge everywhere and he was just so proud," House Speaker Nancy Pelosi said. "But Billy was most proud of his family. His absolute devotion to his family was legendary."

Evans was killed when a car rammed into him and fellow Officer Kenneth Shaver, who also participated in the wreath ceremony. Authorities said officers shot and killed the driver, Noah Green, when he walked out with a knife.

"That innate impulse to ask, 'How can I help?' had Billy running towards danger," Senate Majority Leader Chuck Schumer said. "A reflex as natural and automatic as breath to put safety and others before his own."

This is the second time a Capitol Police officer was killed in the line of duty in two months. Officer Brian Sicknick was also laid in honor at the Capitol Rotunda after he died from his injuries during the insurrection on Jan. 6.

Evans is the fourth officer and sixth person to lie in honor.