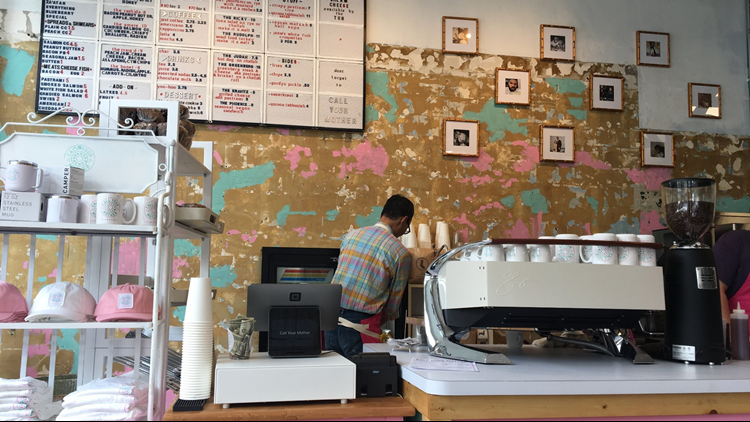 WASHINGTON -- Stepping inside the deli on Georgia Avenue, one of the first things that catches the eye is the color-scheme. The walls are peppered with blotches of pastel pink and green paint. The counters are pastel pink and a mix of colorful rocking chairs metal folding chairs cluster around communal wooden tables and counters.

And the most eye-catching of it all? Photos of rapper Drake line the wall next to the changeable deli menu.

Call Your Mother bills itself as a “Jew-ish” deli. Their mugs, merchandise and wall urge you to bide by its namesake: Call your mother.

It opened Thursday to much local excitement in Park View at 3301 Georgia Avenue. “People were super into it,” said Founder Andrew Dana, who opened the deli alongside partner Jeff Zients. “Neighbors were popping their head in to ask when we’d open.”

Dana says there is no single influence behind the deli, which puts an emphasis on the "ish" in "Jewish." He is half-Jewish and head chef Daniela Moreira is Argentinian. The menu contains several facets of these identities, as Dana explained, which is why you can walk in and get a pastrami sandwich on a bagel or a white fish croquette.

With your meal, you can sit in one of the pastel-colored chairs with brightly-colored cups, mugs and plates to enjoy it among other diners.

“We’d like it to be a neighborhood restaurant,” Dana said, which is why they chose Park View. He explained he wanted it to be the type of place surrounded by people’s homes.

RELATED: 'More than just a plate': The DMV will have its first Black Restaurant Week in November

Dana and Moreira are part of the team behind Timber Pizza, which they had almost initially placed in that Georgia Avenue location before settling in Petworth.

Dana says the inspiration to expand beyond wood-fire pizza came from his dad, a D.C. lawyer. “He always said, ‘I should have opened a deli,’” Dana said. Then, Dana decided he should open one, one that would allow him to continue wood-fire baking. And so, a deli serving up wood-fire bagels was born.

But, they’re not limited to that menu. In fact, beyond the deli is the Supper Club.

“We’re super into communal eating,” Dana explained. For $62 every night, you can dine with 19 other people at the deli. Each night is different, presenting meals from homemade spaghetti to a brisket.

And, that isn’t all. Dana says they’re still working on getting their alcohol license, which they hope to use to bring in different cocktails. And, for Moreira, creating the supper club means more opportunities to try new things. “Dani came at it with a blank slate,” Dana said of the menu. He says they hope to bring in stuffed pasta to the supper menu.

Oh, and the Drake thing? He’s half-Jewish, like Dana.