Neighbors in Northeast say a sinkhole already displaced two homeowners. Now their concerns are growing with the the sinkhole they say, is also growing. 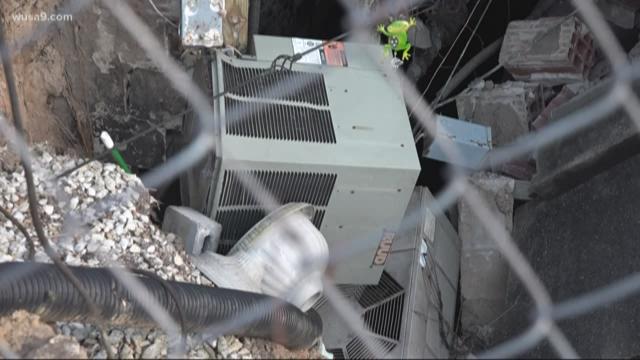 Up close, the sinkhole looks like it’s around five-feet or more wide with a jumble of bricks and HVAC units inside.

The sinkhole is right-up against the basement of a home on the 4900 block of Jay St. NE. Neighbors said two women had to leave when their homes were condemned around February 18th.

"It's unfortunate because these two women have lived here for a very long time. This was supposed to be their forever home,” said Anaia Peddie.

Now, almost a month later, Peddie still has several concerns. She and others said the sinkhole as grown.

"I don't want my house to fall into a hole. I just brought it 18-months ago,” said the Jay St. resident. “It's been just very, very concerning in the sense that, I haven't been able to find out a lot of answers from the city about what they're going to do."

Peddie's house is connected. There’s about 10 townhomes that are connected to be exact and they all sit on a large hill.

There’s a sinkhole in #NE #DC. Neighbors brought me back to the sinkhole & say it’s gotten wider. It’s been almost a month since 2 houses where condemned. Are they safe? @dcra still investigating. @wusa9 #JayStNE pic.twitter.com/Tm7ckkNKlH

The area is called Suburban Village. It used to be an apartment complex that was later converted into Townhomes with a central boiler. This was in the 1980s, according to an old news report WUSA9 found within the Washington Post's archives.

WUSA9 called the city's Department of Consumer Regulatory Affairs. A Spokesperson, Timothy Wilson, described an investigation into erosion and leak issues in the basement where that central boiler sits.

Plenty of neighbors and the President of the Deanwood Citizens Association feel the city should be responsible for what they allowed builders to do here.

"It's an open secret in the city that the water and sewer infrastructure here is a problem,” said Nia Bess, referencing the central boiler and other waste issues in the neighborhood.

The kicker: it's considered private property. The city is investigating the cause of the sinkhole but until an official report says the city is at fault, Wilson said there’s not much they can do.

He said DCRA instructed both displaced homeowners to file claims through their insurance company and with the city.

Peddie said one of the displaced homeowners was already told her insurance company would not cover costs.