The salon owner is looking for the Good Samaritan who offered to cover their expenses after the incident. Now, they need your help. 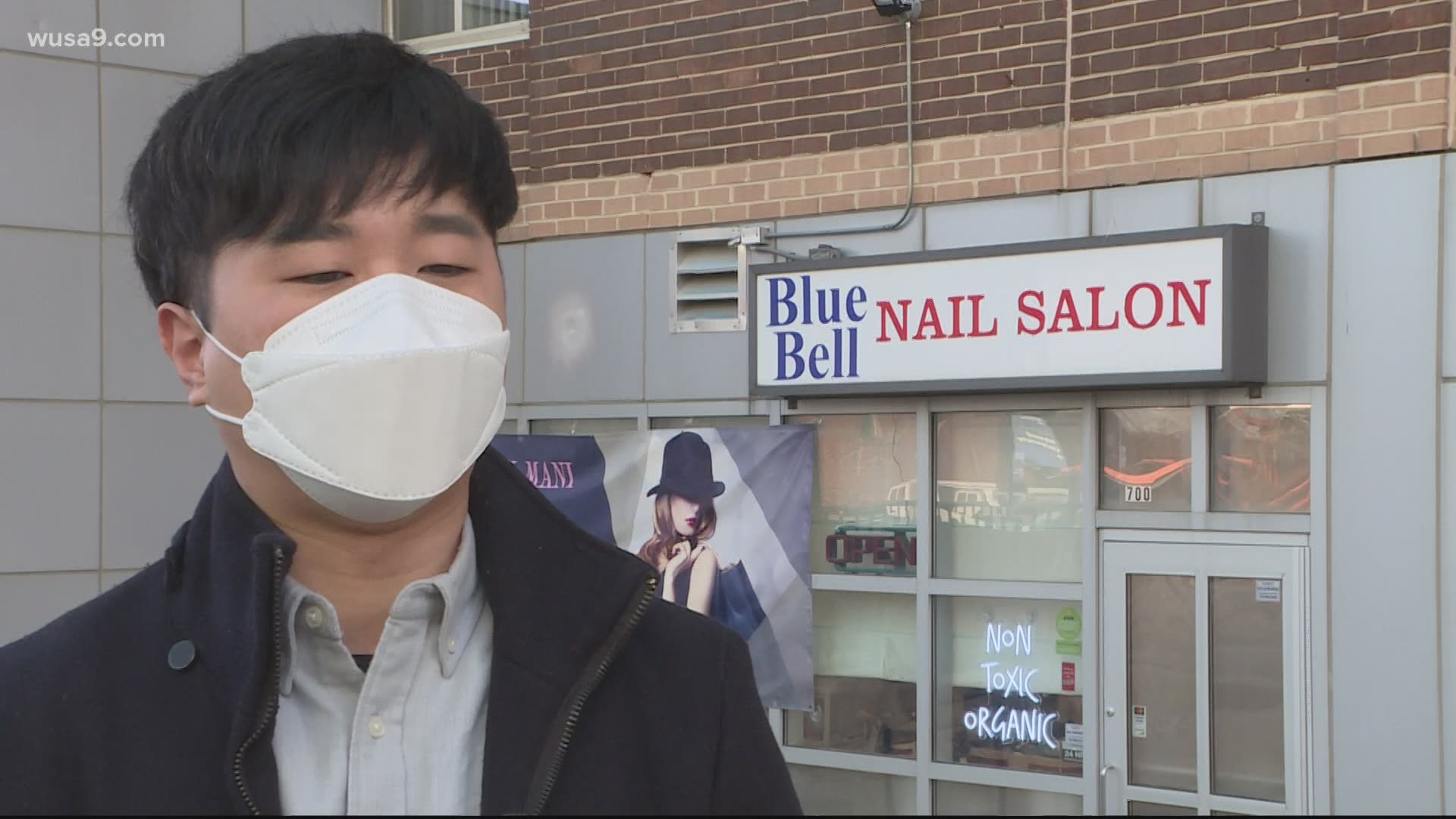 WASHINGTON — A D.C. nail salon owner fought back after she said a customer refused to pay and tried to leave. The salon’s security cameras caught the entire exchange.

It was Tuesday afternoon when co-owner and manager Ryan Kim, said two customers walked into Blue Bell Nail Salon at 700 O Street in Northwest. He said they requested multiple services that added up to $208.

When his mom, the co-owner, asked for payment, he said their credit cards were declined multiple times. Kim said they asked the customers for alternate payment, and they said they would go to a nearby bank and return with cash. One woman left.

“We’ve actually heard this many times,” Kim said. “People tend to use it as a way to get away and not come back. So we usually ask them to either leave something behind just so that we can be safe as well.”

He said the remaining customer refused to do that and began to get angry, accusing his mom and the other employees of doing a bad job.

When she started trying to leave, Kim said his mom locked the door – and the situation turned volatile.

The co-owner of Blue Bell Nail Salon in DC says his mom was attacked yesterday when she tried to stop a customer from leaving who refused to pay.

A Good Samaritan stepped in to help...and they want to find and thank him.

Their story on @wusa9 at 5:30. pic.twitter.com/IPVEFs0FQA

“At this point, my mom tried to stop her or something like that, and she threw her to the ground,” he said.

Footage from security cameras positioned inside the salon shows the customer trying to push past his mom to unlock the door and leave. His mom, however, put up a fight. The video shows her grabbing onto the customer’s jacket and purse, refusing to let go.

At the same time, the footage shows the customer pushing and hitting the owner in the head with her elbow to try to escape.

She eventually pushed past, unlocked the door and made it out of the salon…with Kim’s mom still holding on tightly.

RELATED: Welcome back customers: Here's what hair, nail salons are doing to keep you safe

“We have footage of her getting kicked, pushed down…she was in shock mode at this point,” he said.

Cell phone video from an employee shows his mom screaming as the customer tries to break free. Kim said his mom is now nursing a fractured hand and multiple bruises.

“It breaks my heart,” Kim said. “She’s been working really hard around this community for around six years, and we’ve never had this happen before.”

The altercation took a positive turn, however, when a Good Samaritan walking by, noticed the commotion and walked over to intervene. Kim said he helped to get the customer to leave and then offered to pay for her services – all $208-worth.

“A lot of times when these things happen, you kind of lose faith in humanity just for a little bit, but it’s not all bad. There’s a lot of people who are willing to help out, they’re willing to help other people who are unknown to them in times of crisis,” he said. “So [for] a person to come in right after the incident, it really kind of changed our perspective. It really helped us out in a depressing moment. So I think that kind of gave us a light of hope, and I still smile about that.”

1 / 6
WUSA9
The salon owner is looking for the Good Samaritan who offered to cover their expenses after the incident. Now, they need your help.

However, Kim said the man left before they could thank him properly for his help. So, they want to track him down. He said they plan to offer him a free coffee, meal, or service at their salon as a thank you for turning a horrible situation on its head.

Kim said this year has been tough with the pandemic. He said business has been down 66% from last year – so every dollar counts.

He set up a GoFundMe in the hopes of raising money to cover his mom’s medical expenses from the attack.

D.C. Police tell WUSA9 that they are still investigating the incident.

RELATED: Maryland woman accused of leaving kids in car while she got nails done