MPD stopped & frisked almost 1,500 people in one month. 93 percent of them were black

New data released for the first time by the Metropolitan Police Department allows a deeper look into racial disparities in how DC police enforce stop and frisks. 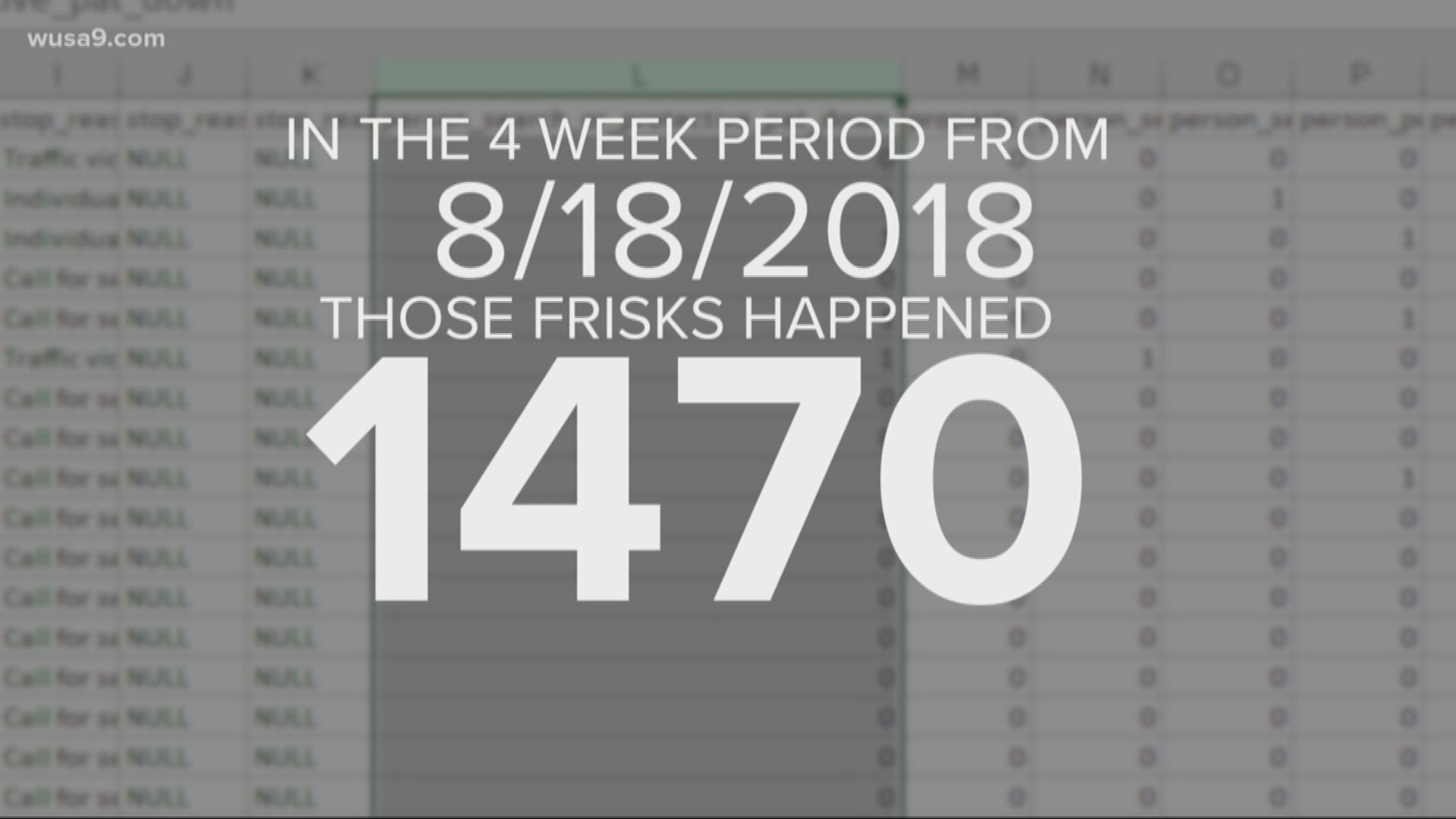 WASHINGTON — D.C. police performed more than 1,400 stop and frisks during a four-week period this summer – and 93% of them were on black citizens, according to a WUSA9 analysis of new MPD data.

The new data set, released Monday, covers every stop conducted by police during the period from July 22 to Aug. 18. It includes for the first time new information fields required by the Neighborhood Engagement Achieves Results (NEAR) Act, which required D.C. police to overhaul the way they track stop and frisk encounters.

MPD’s enforcement of stop and frisks has been under fire for more than a year over allegations that there are serious racial disparities – as reported on extensively by WUSA9 investigative reporter Eric Flack.

While the department’s latest release of data, alongside a publication titled the “Stop Data Report,” confirms Flack’s reporting – 70% of all stops over the target period were conducted on black citizens, despite D.C. being only 49% black – a WUSA9 analysis of the underlying data found even more troubling conclusions not included in the report.

For one thing, between July 22 and Aug. 18 MPD officers conducted more than 1,470 protective pat downs, the technical term MPD uses for “frisks.” The appears to directly contradict testimony by MPD Chief Peter Newsham before the D.C. Council during his February performance review.

WUSA9 found 1,470 protective pat downs reported by MPD between July 22 and Aug. 18 alone. That’s almost 500 more frisks in a single month than Newsham testified were reported in a year by D.C. police.

The latest data set also allows for the first time a breakdown of frisks by race of the subject. WUSA9’s analysis found a staggering 93% of frisks by D.C. police during this period were conducted on black subjects.

At his performance review in February, Newsham told the D.C. Council that MPD “has never had a stop and frisk program.”

But April Goggans of Black Lives Matter D.C. says the message is clear.

“[It] says to me there still is a disconnect between what the numbers say and what MPD is still willing to acknowledge, both verbally and what officers are allowed to do on the street,” Goggans said.

We requested an interview with MPD today about this report, and submitted questions.

MPD was unable to provide us answers today. But will do an interview with WUSA9 tomorrow.

And we'll have it for you then.