At just 24-years old, Ashley N. Johnson is a busy woman. She is the CEO of ANJPR Consulting, LLC, based in the Washington, D.C. area. 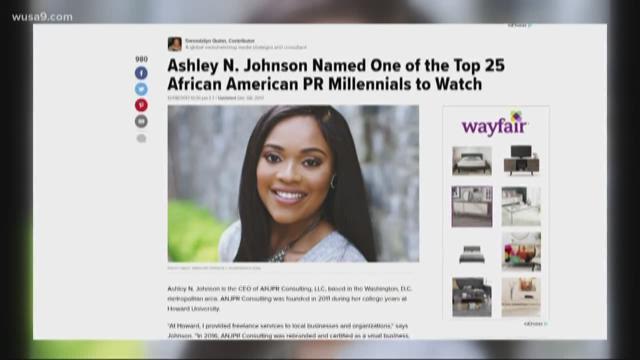 At just 24-years old, Ashley N. Johnson is a busy woman. She is the CEO of ANJPR Consulting, LLC, based in the Washington, D.C. area.

The Huffington Post recently named Johnson 'One of the Top 25 African-American PR Millennials to Watch."

Johnson grew up south of the metropolitan area, in Stafford, Va. Before she even finished high school, she knew she was interested in public relations.

"I graduated from high school in 2011, went to Howard University and I branded my company, ANJPR was everywhere," Johnson said.

Today, CEO of ANJPR Consulting is her full-time job. She said being such a young entrepreneur is a scary place to be, but she is happy the way things worked out. Johnson said she is financially stable and able to do anything that somebody with a full-time job can do.

But things weren't always easy. Johnson said she had a very difficult time getting a job after graduating college. She applied to several PR agencies and non-profits and didn't have any luck.

Now, as a young entrepreneur, Johnson is excited about the honor from the Huffington Post.

"To even be considered was such an honor. The fact that I'm doing it now and the fact that I'm reaching people and it's going to expand from here, that's humbling to know it's my calling," Johnson said.

She hopes to see her young company expand over the next few years. She also has a message for other young girls out there.

"In order to get the best, you've got to put in the work. No matter what race you are, what gender you are, as long as you have the calling and the dreams you can do whatever you want," Johnson said.