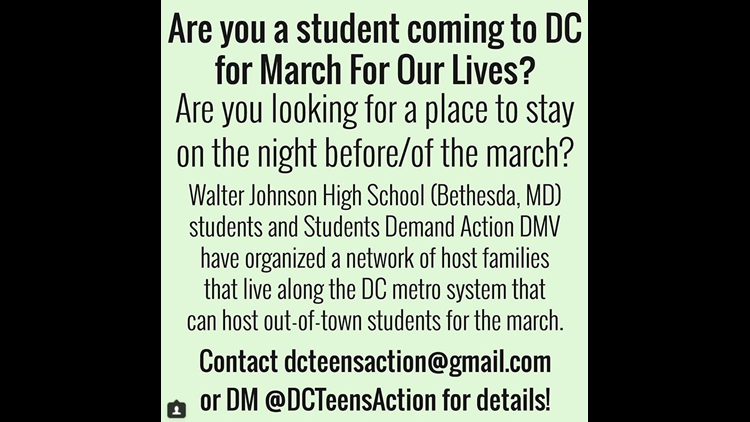 Local teens offer housing network for March for Our Lives

WASHINGTON (WUSA9) — DC high school students are offering a network of housing for the thousands of people expected to pour into the city for the March for Our Lives on March 24.

Just a few days after the Parkland, Florida school shooting claimed the lives of 17 people, students at Walter Johnson High School were ushered out of their school into the stadium after a bomb threat was reported. Still reeling from the Florida shooting, Canning and Hoenig told WUSA9 that’s when they decided: “Enough is enough.”

VIDEO: DC expecting flood of people for March for Our Lives

Shortly afterward, the students created DC-Area Teens Action, an organization that’s social-media based and meant to provide updates on action and movements by local teenagers. On their Facebook, Twitter, and Instagram, the teens began asking for host families and offering housing to people coming in for the march.

“Are you a student coming to DC for the March for Our Lives? Are you looking for a place to stay on the night before/of the march?” A graphic on their Instagram asks.

When WUSA9 spoke with the teens on Friday night, they said they have over 300 hosts so far, who can each take 2-3 participants. Meanwhile, about 300 people have requested housing, coming from California, Connecticut, Florida, and even Canada.

RELATED: The Parkland survivors started a movement when they took on gun violence. Here's how it happened

In preparation for the hundreds of people taking advantage of their network, the students say that local DC restaurant Roofer’s Union has offered them 300 bagged lunches and that they’ve begun collecting loaded-up Metro cards to hand out to participants.

Hi everyone! We are asking for metro cards for all the people coming in from out of town. If you would like to donate, please send cards loaded with $10 to Jamie Mulhern 6400 Rock Spring Dr, Bethesda, MD 20814

And this is just the beginning for the teenagers who told WUSA9 that they’re planning on more activism following the march.

Their next focus is voting. As Maryland residents can register to vote at age 16, they hope to encourage their classmates to register to vote, so they can vote on the issues that matter to them.

This is particularly important for Mai Canning, the only junior in the group of graduating seniors, who told WUSA9 that she hopes to make sure the issue of gun control stays prevalent. To lawmakers who oppose gun control, Canning had one message: “We will vote them out.”

Over 36,000 people have said that they’re going to the March for Our Lives on Facebook. Metro has already announced that they’ll be running rush-hour service on March 23 to accommodate the march as well as the concurrent Cherry Blossom Festival.