Many gathered outside the Israeli Embassy in downtown Washington DC amid deadly tensions between Israel and Palestine recently. 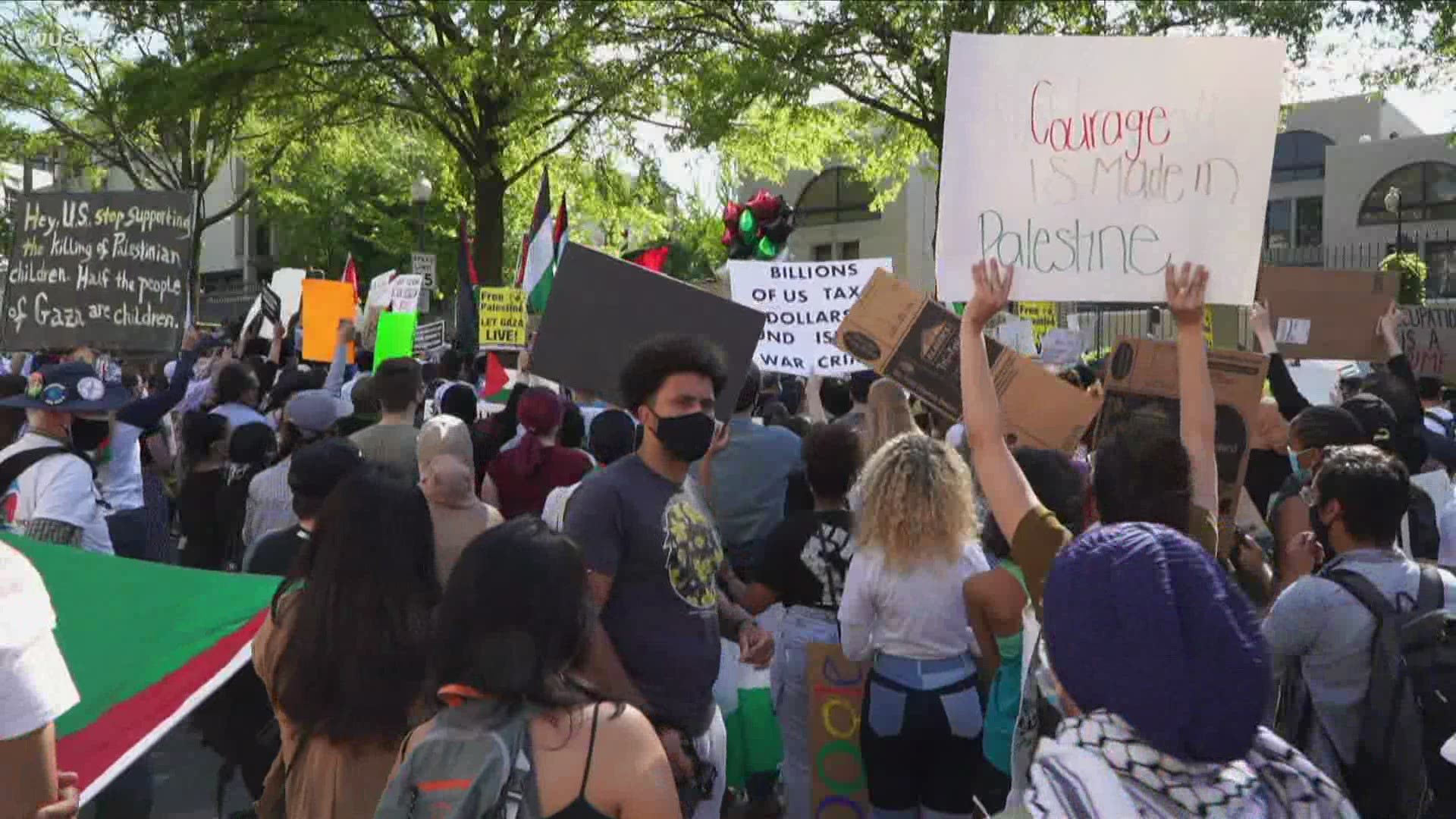 WASHINGTON — Hundreds of people gathered outside the Israeli U.S. Embassy in downtown Washington D.C. amid deadly tensions between Israel and Palestine recently that have played out most notably in the Gaza Strip.

The latest gathering comes after protests and rallies were seen this past weekend in D.C. at the same embassy and at the National Mall.

President Biden and his administration have come under even more pressure to ease tension amid the escalated actions. Hundreds have died in the region amid airstrikes from Israel and rocket launches from Hamas in Palestine.

Many gathered at the embassy said they are frustrated with the actions taken by Israel, and have called the country's actions unjust.

Since the fighting began last week between Israel and Gaza’s Hamas rulers, the Israeli military has launched hundreds of airstrikes it says are targeting Hamas’ militant infrastructure, while Palestinian militants have fired more than 3,400 rockets from civilian areas in Gaza at civilian targets in Israel.

The latest attack from Gaza hit a packaging plant in a region bordering the territory. In addition to the two people killed, who were in their 30s, Israel’s Magen David Adom rescue service said it transported another seven wounded to the hospital. Thai Foreign Ministry spokesman Tanee Sangrat said the wounded were also Thai.

The Israeli military said militants also fired rockets at the Erez pedestrian crossing and at the Kerem Shalom crossing, where humanitarian aid was being brought into Gaza, forcing both to close. It said a soldier was lightly wounded in the attack on Erez.

Israel continued its airstrikes into Gaza, leaving behind a massive mound of rebar and concrete slabs in its attack on the six-story building with centers used by the Islamic University and other colleges. Desks, office chairs, books and computer wires could be seen in the debris. Residents sifted through the rubble, searching for their belongings.

RELATED: EXPLAINER: Why is Gaza almost always mired in conflict?

RELATED: Israel, Hamas escalate heaviest fighting since 2014 with no end in sight