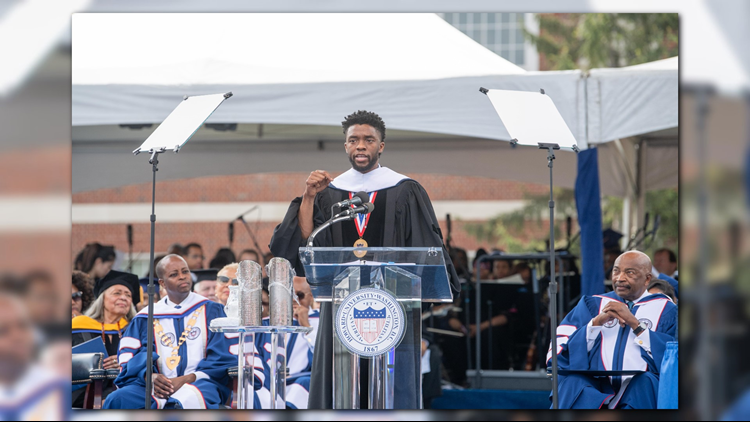 Black Panther star Chadwick Boseman took the stage at his alma mater, Howard University, to give the 2018 commencement speech.

After accepting an honorary Doctorate of Humane Letters, Boseman did the "Wakanda Forever" salute by crossing his arms over his chest to the cheers of the 150th graduating class.

Boseman opened his speech by wishing his mother a Happy Mother’s Day and reciting the names of professors, both living and passed.

“Your lessons continue to guide and enlighten me to this day,” he said, before going on to thank the university for the honor.

“This is a magical place where the positives and negatives seem to exist in the extremes,” he said reminiscing on his time at Howard. He told a story about coming across Muhammad Ali on campus. “I walked away floating like a butterfly,” he said to laughter, talking about how that experience made him feel like he could do anything. “That is the magic of this place. Almost anything could happen here.”

He went on to call out the names Howard has been referred to as: Wakanda University, The Mecca, The Hilltop. “Every day is leg day here,” he laughed, referring to the literal meaning of The Hilltop.

“The Hilltop represents the culmination of the intellectual and spiritual journey you went on while you were here," he went on, describing overcoming the academic, financials and social struggles of college.

“But you’re here…you made it to the top of the hill."

Although Boseman encouraged the graduates to look forward, he also urged them to live in the moment.

“Invest in the importance of this moment…savor the taste of your triumph today,” he said.

In a highly relevant moment, Boseman went on to discuss the students who took over the administration building at the end of March. They staged a sit-in that made Howard University sit-in as it lasted 9 days. During that time, students actively negotiated their list of demands with the administration and achieved a settlement. Boseman called their actions “impressive,” saying that it was positive for both students and the administration.

And Boseman can relate. He, too, had taken to the administration building during his time at Howard, defending the fine arts program he was in. But, Boseman laughed, the more recent sit-in was a lot more organization and many students sat in the building in shifts, allowing students to go to class. Unlike him.

“You love the university enough to struggle with it,” Boseman said as went on to ask students to continue to make demands for those who come after them and thanked the administration for listening to students.

“Students, your protests are also promising because many of you will leave Howard to enter systems and institutions that have a history of discrimination and marginalization. The fact that you have struggled with this university that you love is a sign that you can use your education to improve the world that you were entering.”

Going on from his time at Howard, Boseman talked openly about his path through the entertainment industry from a soap opera gig to “Black Panther.” In his first soap opera gig, he spoke about being asked to play a role that “wasn’t necessarily stereotypical,” but left him conflicted because “it seemed to be wrapped up in assumptions about us black folk.”

He then decided to approach the show executives and ask them assumptions made in the role, a conversation that finished with an executive mentioning Boseman’s alma mater and saying, “Thank you for your concerns. We’ll be watching you.” The next day, Boseman was let go.

Though Boseman said the firing was a "bitter pill to swallow," he also said that, “the questions I asked that day put the producers on guard and perhaps paved the way for a less stereotypical portrayal for the black actor who stepped into the role after me.”

“Sometimes you need to feel the real pain and sting of defeat to activate the real passion and purpose that God destined inside of you," he told the graduates.

And for Boseman, that defeat didn't deter him. "Black Panther" topped the box office for weeks after its release.

Finishing up, Boseman told the graduates to find their purposes, no matter what path they take, as purpose is the most important thing.

“Now, this is your time,” he quoted Black Panther, to applause and laughter.

And, true to the start of his speech, Boseman smiled and finished with his arms crossed over his chest.