Homeless advocates say in order to find a balance, the District needs to devote more funding to housing solutions. 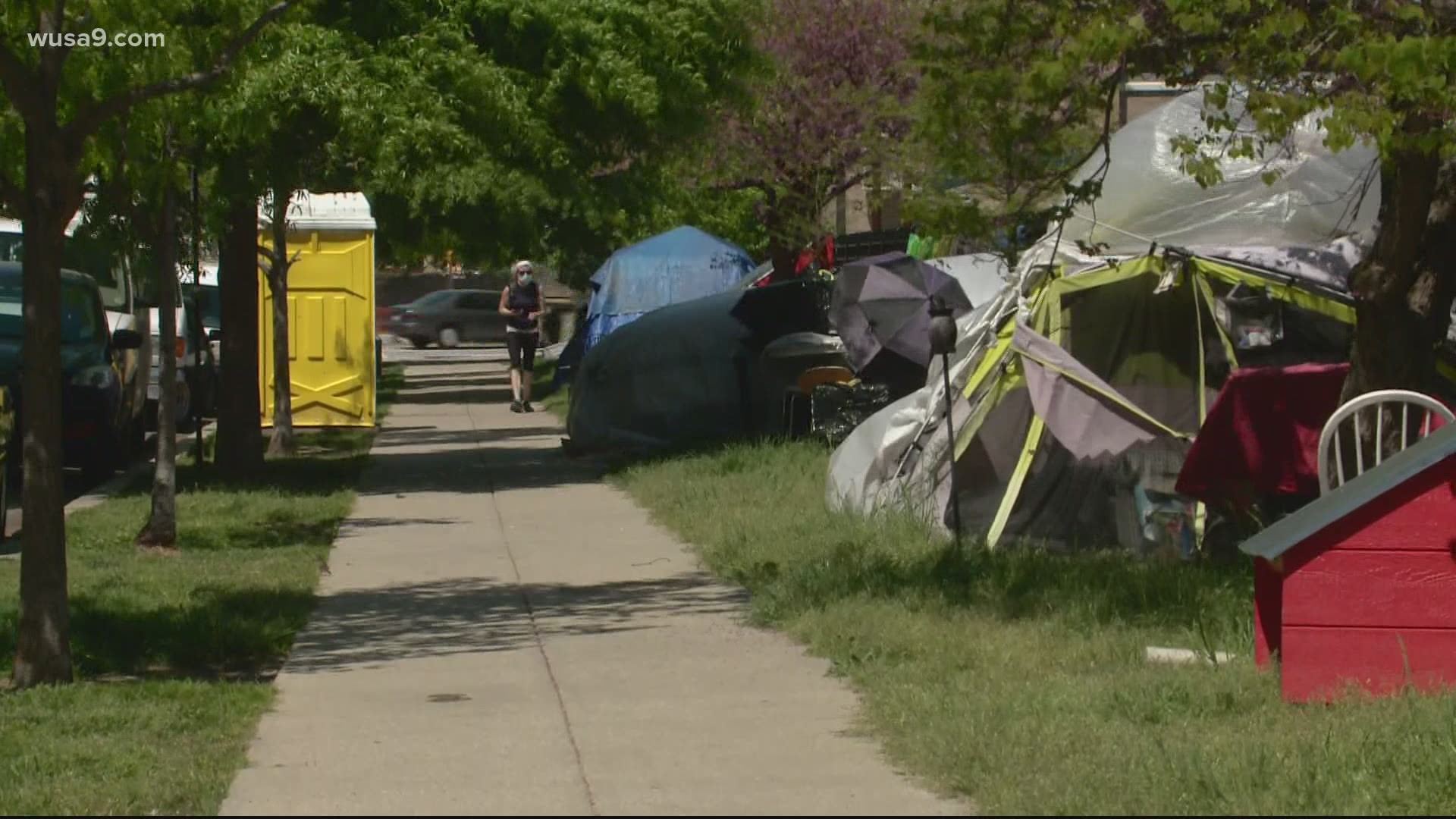 WASHINGTON — For five years, William Long has called the streets his home. Equipped with a red tent, the 60-year-old D.C. resident has chosen to live near the corner of 10th Avenue and Rhode Island Avenue in Northwest.

Close to a dozen other homeless people have occupied the same grassy area in the Shaw neighborhood. Ever since the pandemic started along with construction across the street, an area with just one longtime unhoused resident turned into a homeless encampment.

"If I can I just pop a tent to keep the elements off me so be it," Long said. "This is not me. This is not my lifestyle."

The homeless encampment sits directly next to Seaton Elementary School, specifically adjacent to the playground just on the other side of the fence. Parents of children who attend the school and neighbors have increasingly become concerned about public safety.

The Office of Unified Communications has received 911 calls from the site 10 times since March 2020. Advisory Neighborhood Commissioner Michael Eichler said incidents at the homeless encampment include starting fires, drug use and domestic disputes.

The level of concern intensified last week when a man was arrested for Assault with a Dangerous Weapon, Carrying a Pistol without a License, Possession of Unregistered Ammunition, Receiving Stolen Property and Possession of a Large Capacity Ammunition Feeding Device.

In a letter from a constituent recently sent to city officials, it claimed the man had the gun inside his tent at the homeless encampment.

"We feel that while the mayor's office and city officials have taken actions to mitigate our safety concerns, they haven't done enough to find that win-win situation," parent Suki Lucier said.

"The priority is the safety of the students attending the school," parent Shereen Williams added.

Both Lucier and Williams have children in fourth grade. The school principal told WUSA9 that amid growing worries about the safety of children, police officers are now posted every arrival and departure time. One of the entry points has been switched to a different location of the building so children could avoid the homeless encampment.

The school sent a notice to parents saying it's actively working with community partners to provide a solution.

Everyone agrees no one deserves to sleep out on the streets, which is why neighborhood leaders and parents said Mayor Muriel Bowser isn't doing enough or willing to find creative solutions to meet everyone's needs.

Advisory Neighborhood Commission 6E submitted a letter to the mayor's office to support a resolution that would offer long-term and short-term solutions to homelessness.

"We are aware of the concerns of needing to take care of our most vulnerable and unhoused neighbors but concern for them and support for them should not come at the cost of the safety and security of our students," Eichler told WUSA9.

The Deputy Mayor’s Office for Health and Human Services (DMHHS) is aware of the encampment and has conducted a cleanup last month.

The cleanup, or so-called engagements, means residents must vacate the premises for the city to clean. Despite the CDC recommending cities not to complete full cleanups, a DMHHS spokesperson said the department will continue to monitor the area to see if additional cleanup to mitigate health risks is needed.

Outreach teams work every week to connect unhoused residents to services and supports including hotel rooms or other shelters but not everyone chooses to accept.

Eichler said officials could listen to what the homeless community would want and offer non-shelter options such as a campground with certain amenities.

Long said for one, the shelters aren't in the best condition and argue not everyone at the site has bad intentions.

"I don't want a bad impression," Long said. "I clean up this area and watch out around here make sure kids are safe."

Miriam's Kitchen Senior Manager of Policy & Advocacy Jesse Rabinowitz said encampments, which have existed before last year, are growing in the city as a result of the pandemic. To find a proper balance, the District needs more housing options.

His organization is pushing for the mayor to use $100 million on housing to end chronic homelessness in the District.

"The eviction moratorium is still in place, so we are preparing for this tidal wave of evictions and without drastic use of local funds and federal funding, we're going to continue to see an increase in homelessness," Rabinowitz said. "That's why we're pressing the mayor to use her budget not only to prevent more people from entering into homelessness but to ensure people already experiencing homelessness can move into the housing that they need."

In a statement to WUSA9, Councilman Charles Allen said:

“My staff and I have raised concerns with DC’s homeless outreach teams repeatedly after hearing from neighbors of this site. This site is different because it is so close to an elementary school and has been far more brazen with use of fires and several public safety incidents. The broader issue of homeless encampments does require a lot more careful and deliberate work, as well as policy and budget solutions for ending long-term homelessness. But here I believe the District needs to step in for the interest of public safety in a more direct way.”