Girl Scouts in DC sold 4.6 million boxes of cookies last year. Now they're back, and here's where to find them

The Girl Scouts of Greater Washington sold 4.6 million boxes of the cookies just last year, housing them in RFK stadium for pickup.

WASHINGTON — Those looking to curb their sweet tooth in the District are in luck: Girl Scouts of the Nations Capital are back with their trademark entrepreneurial spirit. The largest council in the country's annual cookie booths kicked off on February 7, hitting street corners and parking lots across the DMV.

They've been outside of grocery stores and on street corners for years, but they've also been running one of the most lucrative businesses in the country.

Just last year, Girl Scouts of Greater Washington sold 4.6 million boxes of cookie deliciousness. Yes, you read that right: 4.6 million. And at $5 a box, the sales are a triumph of both marketing and female empowerment.

This year, cookie booths around the DMV will stop selling on March 15. But the profits from the cookies help girls in and around the District do much more than sharpen their sales skills, Soto-Harmon says.

From RFK to Your Doorstep, with Love

Where does one house 4.6 million boxes of cookies? You can't fit those in a garage. Those are the kind of numbers that fill stadiums and sold-out arenas.

So the Girl Scouts of Greater Washington do just that every year: they fill RFK Stadium with massive, 18-wheel tractor-trailers packed with every kind of cookie you can order.

It's a long process that has been analyzed and streamlined over the years, Soto-Harmon explained. The Girl Scouts even enlisted some Ivy League help in making the transports quicker.

"We had some MBA students from Harvard come and look at our selling logistics. When you think of the magnitude of 4.6 million boxes of Girl Scout Cookies, you think big. Basically, what happens is we have huge, 18-wheelers full of Thin Mints roll-up. And next to it is the tractor-trailer of Do-Si-Do's, and the next some Trefoils and so forth," Soto-Harmon explained. "That is incredible to me, the amount of work that goes in and the scale of that."

After picking up the massive hoard of cookies, troop leaders house them in designated garages until cookie booth time, which usually falls between January and April. Then parents and troop leaders pick up the right number of boxes to go back to customers.

The proceeds from the cookie sales go toward funding community service missions and troop resources, like camping trips and career development programs. Soto-Harmon said that 100% of the cookie sales stay local – which means that the profits earned from those selling around the DMV get poured back into those local programs and maintaining the eight camps the girls use locally. 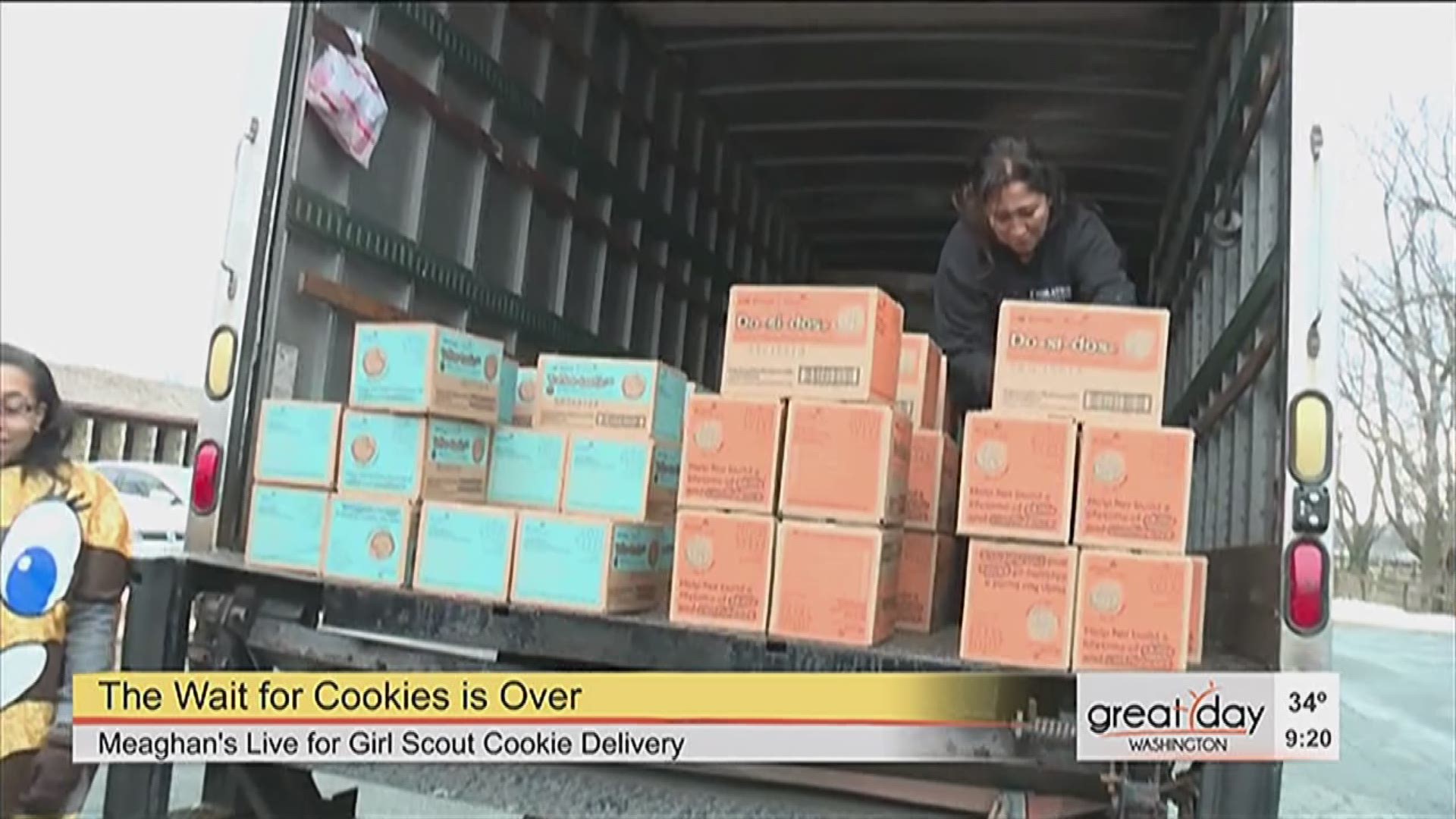 Soto-Harmon said the Girl Scouts have been experimenting with other ways to improve the business, including sharpening online sale strategies and learning to accommodate growing nutritional needs. Two of this year's cookies – S'mores and the new Lemon-Ups – are packaged differently than the colored cardboard boxes in an effort to improve shipping costs and increase how many boxes can be delivered in trucks. Toffee-tastics are gluten-free, and Soto-Harmon said the ingredients are always being improved.

Three years ago, the Girl Scouts took their cookie operation digital. Now you don't have to know Scout to know where to buy the cookies, nor do you have to wait for odd hours in front of post-offices and grocery stores. Instead, you can simply type in your ZIP code in the Cookie Finder app and a long roster of available troops and their hours pops up.

"A big reason the cookie sales are so successful is that it is that human contact, the face-to-face," Soto-Harmon said. "That interaction is huge. What digital has done has given girls the opportunity to reach out to family and friends who may not be in the area and would like to help. Now grandparents can buy the cookies and have them shipped to them."

However, just because people can get Girl Scout Cookies through the mail, that doesn't mean they all are.

"When you are about to checkout, you have options," she said. "There is a choice on if you want to pay for shipping, or if you want a girl to deliver it to your house. And that's still the number one choice!"

More than Just a Business

While the cookie sales have made a dramatic impact on the financial success of Girl Scouts – amounting to around $800 million yearly – the sales have also made a tremendous impact on the confidence of the girls selling them.

For many girls around the DMV, the process of selling the cookies is the first hands-on business experience they receive. The Scouts says selling the cookies teaches girls financial skills, as well as interpersonal skills like eye-contact and public speaking.

"I don't know how many businesswomen I have met that tell me it was Girl Scouts and selling cookies that was their first time realizing, 'Hey, I am good at this! I am good at sales. I am good at advocating, that kind of thing!'" Soto-Harmon said. "What the cookie sales do is help girls develop that confidence in a number of ways: creating an elevator pitch; making eye contact with adults who aren't their parents; how to accept rejection and of course business skills."

"They have a goal in mind with what they want to do with that money once it's raised, whether it's painting a homeless shelter or helping animal shelters, or even financing a trip they want to take for their troop," Soto-Harmon said. "It's not just they are selling cookies, they are thinking of ways to give back."

The digital sphere has allowed the business to take off and make cookie selling more efficient, but Soto-Harmon said it's also given many girls the chance to dive deeper into cyber literacy and social media skills.

The organization is always looking for volunteers to help out, beyond just volunteering as a troop leader.

Credit: AP
Juliette Gordon Low, of Savannah, Ga., who founded the U.S. Girl Scout movement in 1912. Hundreds of Girl Scouts are expected to gather in the Georgia Capitol, Tuesday, Feb. 6, 2018, offering milk and cookies as they try to persuade lawmakers to get Low’s name affixed to a Savannah bridge that’s currently named after a white segregationist. (AP Photo/File)

According to Girl Scouts, the Mistletoe Troop in Muskogee, Okla., baked and sold the first-ever batch of Girl Scout Cookies in a high school cafeteria in 1917. A couple of years later, in 1922, American Girl magazine showcased a simple sugar cookie recipe. By 1939 the fist version of Thin Mints, called "Cooky-Mints," had appeared.

Soto-Harmon said First Lady Lou Henry Hoover can be given major credit for the switch from homemade cookies to bakeries.

"She was president of Girl Scouts and was the First Lady at the same time. She was the one in the 1920s who said, 'Wait a minute – why are we baking these cookies?'" Soto-Harmon said. "Can you imagine if we had cooks bake the cookies and then had the girls really honed in on the selling and the marketing instead of being in the kitchen? So the first commercial cookie sale happened under her lead."

The organization also amped up its production by growing its number of licensed baking sites. In an effort to be more consistent, the group went from 14 bakers in the 1960s to four by 1978. Now, just two bake the country's supply: Little Brownie Bakers in Louisville, Kentucky, and ABC Bakers in Richmond, Virginia.

While one might think a council uses the bakery closest to them, that's not the case. Each regional council – of which there are 112 – chooses which bakery to do business with. Even though the D.C. council is closer to Richmond, their baker is actually Little Brownie.

It seems like a cardinal sin to eat only one type of Girl Scout Cookie, especially when there are so many to choose from. While the long-time fan favorites like Thin Mints and Samoas sell quickly for a reason, here's your cheat sheet to flavors in case you want to branch out (or if you're grabbing another round of boxes "for a friend"):

When asked about her favorite type of cookie, Soto-Harmon smiles.

"They're all my favorite cookie!" she said, laughing. "Although I will say, the Thin Mint sleeve is a serving; it's not two cookies. "

You heard it here folks.

RELATED: SC man buys $540 in Girl Scout cookies to get girls out of the cold