Here's what was up with those fighter jets over DC

The jets were a part of a celebration showcasing the inaugural raising of the American flag over the newly opened World War I Memorial in the District. 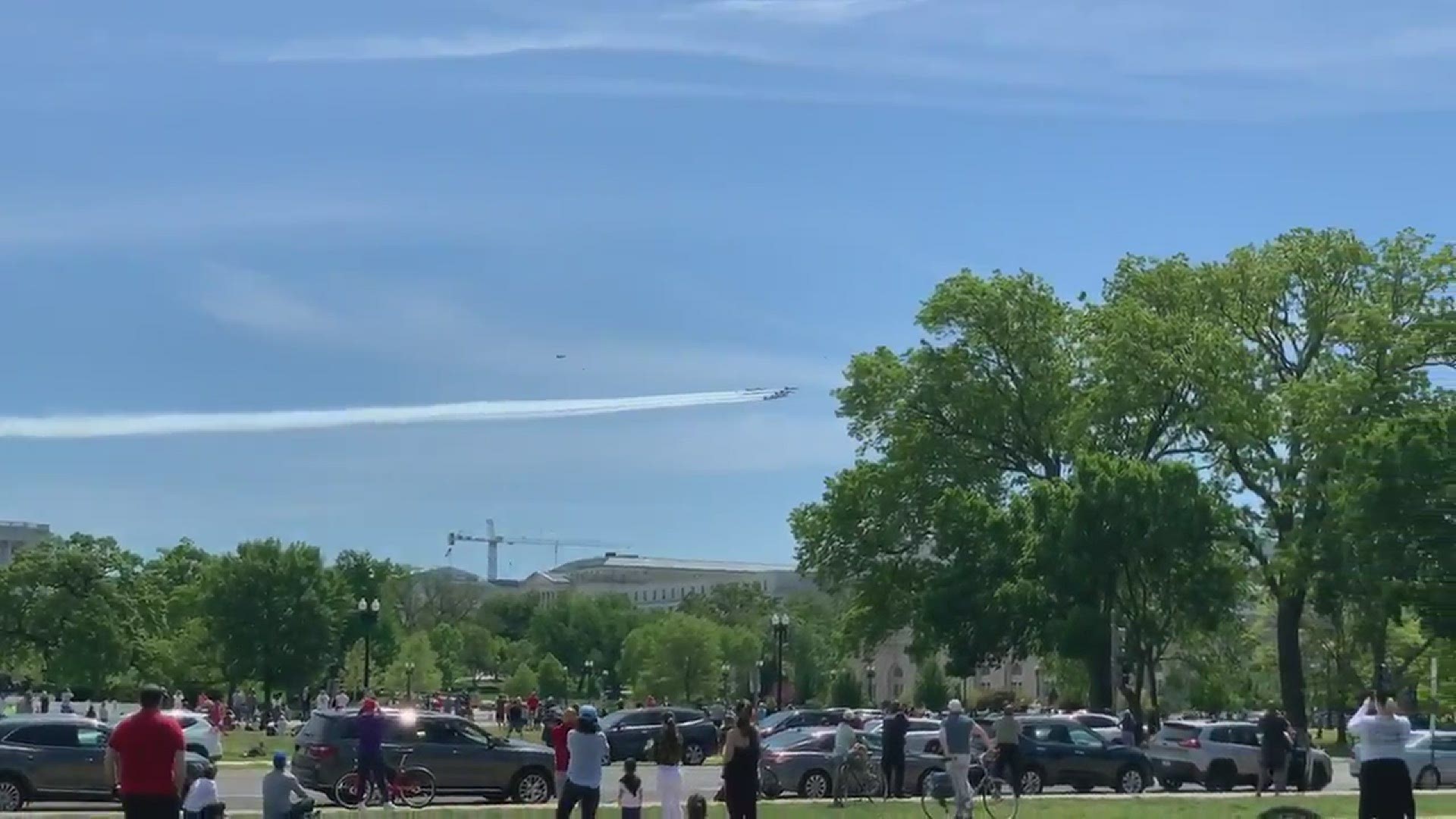 WASHINGTON — Loud fighter jets could be overheard across the National Mall and much of D.C. on Friday, generating tweets from startled locals. The sounds could be heard even inside the White House.

The jets were a part of a celebration showcasing the inaugural raising of the American flag over the newly opened World War I Memorial in the District.

The flag has a special history, as explained on the website for the virtual event, stating that the ceremony began with "An American flag that first flew over the United States Capitol on April 6, 2017, commemorating the Centennial of the United States entry into World War I. This commemorative flag was then flown over the American World War I battlefield cemeteries of Europe and WWI Museum in Kansas City, to honor the 116,516 individuals who gave the last full measure of devotion."

Ok who else heard that fighter jet over DC right now?

The ceremony was broadcast live online and paid tribute to America's role in WWI while also showcasing performances and guest appearances, including remarks by President Joe Biden and Secretary of the Interior Deb Haaland.

Click here to watch a recording of the ceremony.

The new memorial was built by the United States World War I Centennial Commission and designed by architect Joseph Weishaar. It features a statue of Gen. John J. Pershing, commander of the American Expeditionary Forces during the war; the Peace Fountain, which features an excerpt from the poem “The Young Dead Soldiers Do Not Speak” by Archibald MacLeish; engraved quotes and references to theaters, campaigns and battles in which American forces participated; and exhibits about the role of the United States in World War I.

The memorial’s central feature, a sculpture titled “A Soldier’s Journey,” is scheduled to be installed in 2024. The 58-foot-long sculpture by Sabin Howard will feature 38 figures depicting the journey of a recurring American soldier and representing the larger American experience of World War I.

Residents and tourists alike can visit the new memorial at the former Pershing Park, 1.76-acres along Pennsylvania Avenue NW between 14th Street NW and 15th Street NW, across from the White House Visitor Center.

Heads up for those in DC along the Mall later today. At 11:10AM, two F-22 Raptors will conduct a flyover for the dedication of the new World War I Memorial in the area of 14th Street (Freedom Plaza/Pershing Park). Free airshow! @HelicoptersofDC pic.twitter.com/znJQqmJiJf

While the flyover celebration wasn't exactly a state secret, plenty of D.C. residents took to social media to make it clear they were caught off guard, and to post about their shaking windows and blaring car alarms.

hello did anyone else in dc just feel like a jet flew 10 feet above their building?

Friday wasn't the first time a flyover display made headlines.

The special joint show and training took place so both squadrons could debut some new fighter jets. The rare flight happened over the Imperial Valley in Southern California.

"The formation grew out of a series of joint training opportunities held in 2020 and 2021, and serves as a symbol of the teamwork, discipline, and skill of the men and women of our United States military forces deployed around the globe," both squadrons said on Twitter.

The Thunderbirds are the demonstration squadron for the Air Force and flew in their new F-16 Fighting Falcons. While the Blue Angels, which are similar to the Thunderbird but represent the Navy, debuted their F/A-18 Super Hornet. The Blue Angels have been flying the F/A-18A-D Legacy Hornet for the past 34 years.

The debut of the new jets was a rare occasion. A "Super Delta" is formed when six Super Hornets fly in a standard delta formation while six Thunderbird jets flank them — three on each side, according to the Pensacola News Journal.

Both military branches said Memorial Day Weekend is when the public will have an opportunity to watch the formation in a virtual nationwide broadcast. Video of the full flight will be shown during the National Memorial Day Parade "America Stands Tall."