It wasn't easy for the Ballou HS Class of 2017, but last spring, they decided they were all going to apply to college. 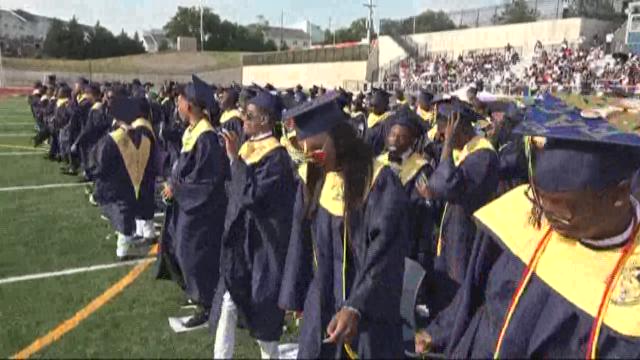 Defying the odds, Ballou High School held its gradation on Tuesday and each of the 170 students to cross the stage received a college acceptance letter.

It’s a first for the Southeast, D.C. public school.

Ballou's Class of 2017 sent a message to all of those “nay-say'ers” out there.

"They said I wouldn't be nothing. Now they always say congratulations!” a chorus of graduates sang on the school’s football field as excitement beamed from their faces.

"Everybody just, they was betting on us failing, and we all came together and we graduated,” said Me’Ashja Hamilton.

They had the second lowest city public high school graduation rate according to WUSA9’s media partner, the Washington Post, who uncovered the bombshell this year. In May, the paper reported nearly 200 D.C. public school teachers quit their jobs since August. Ballou had lost a quarter of its staff.

"It set us back, learning-wise. Grades couldn't get put it. It was difficult,” said Hamilton. She said the difference was this year, the students came together to work with the staff.

Ballou’s senior class decided last spring, they were all going to apply to college.

"Stop underestimating us,” said Hamilton. “You just have to give them a chance. The opportunity to do better and you will so that a lot of students in Southeast in particular can do great things."

The school’s principal said another 20 students will graduate in August.