Seth Conrad Rich, a Democratic National Committee employee, was shot and killed Sunday in the Bloomingdale neighborhood of Northwest D.C. 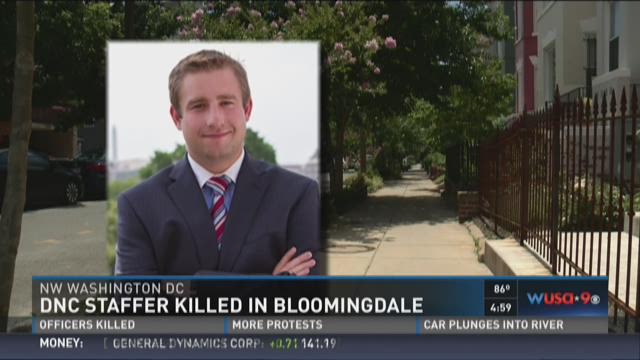 The shooting happened in the 2100 block of Flagler Place NW on Sunday at 4:19 a.m., Metropolitan Police said.

Police arrived at the scene and found Conrad conscious and breathing. He was suffering from gunshot wounds. Conrad was taken to the hospital where he later died from his injuries.

"A lot of my girlfriends around here are talking about this and looking out for one another. We don't want anyone walking by themselves," neighbor Katie Ferguson said. "It's scary. I want something done and so far there is a lot of talk, but what's really being done?"

Officials said they are looking into the possibility that Rich’s murder is connected to other recent robberies in the area.

"We will see if there are common factors we can relate to our case [and] we are still exploring the other cases to look," said Acting Captain Anthony Haythe of the MPD homicide unit.

Conrad’s roommate told WUSA9 that he was probably walking home from his girlfriend’s apartment when he was robbed and then shot.

The 27-year-old was the Voter Expansion Data Director at the DNC. He had been with the organization since 2014.

“Our hearts are broken with the loss of one of our DNC family members over the weekend. Seth Rich was a dedicated, selfless public servant who worked tirelessly to protect the most sacred right we share as Americans – the right to vote. He saw the great potential of our nation and believed that, together, we can make the world a better place. He was a joy to have as a member of our team, and his talents, intelligence and enthusiasm will be deeply missed by the many friends, colleagues and coworkers who worked by his side in service to the highest ideals of our democracy."

"We send our deepest heartfelt sympathies to Seth’s family, and we will keep them in our thoughts and prayers as we try to pick up the pieces and carry on the work that was so important to Seth and to us.”

Police do have regular patrols in the community and investigators are working to determine if the crime was caught on a surveillance camera.

Anyone with information about this case is asked to call the police at (202) 727-9099. Additionally, anonymous information may be submitted to the department’s TEXT TIP LINE by text messaging 50411.