DC's rooftop bars are fun, but some might be serious fire hazards

WUSA9 investigation uncovers D.C. fire marshal not inspecting rooftop bars as often as he says he should. 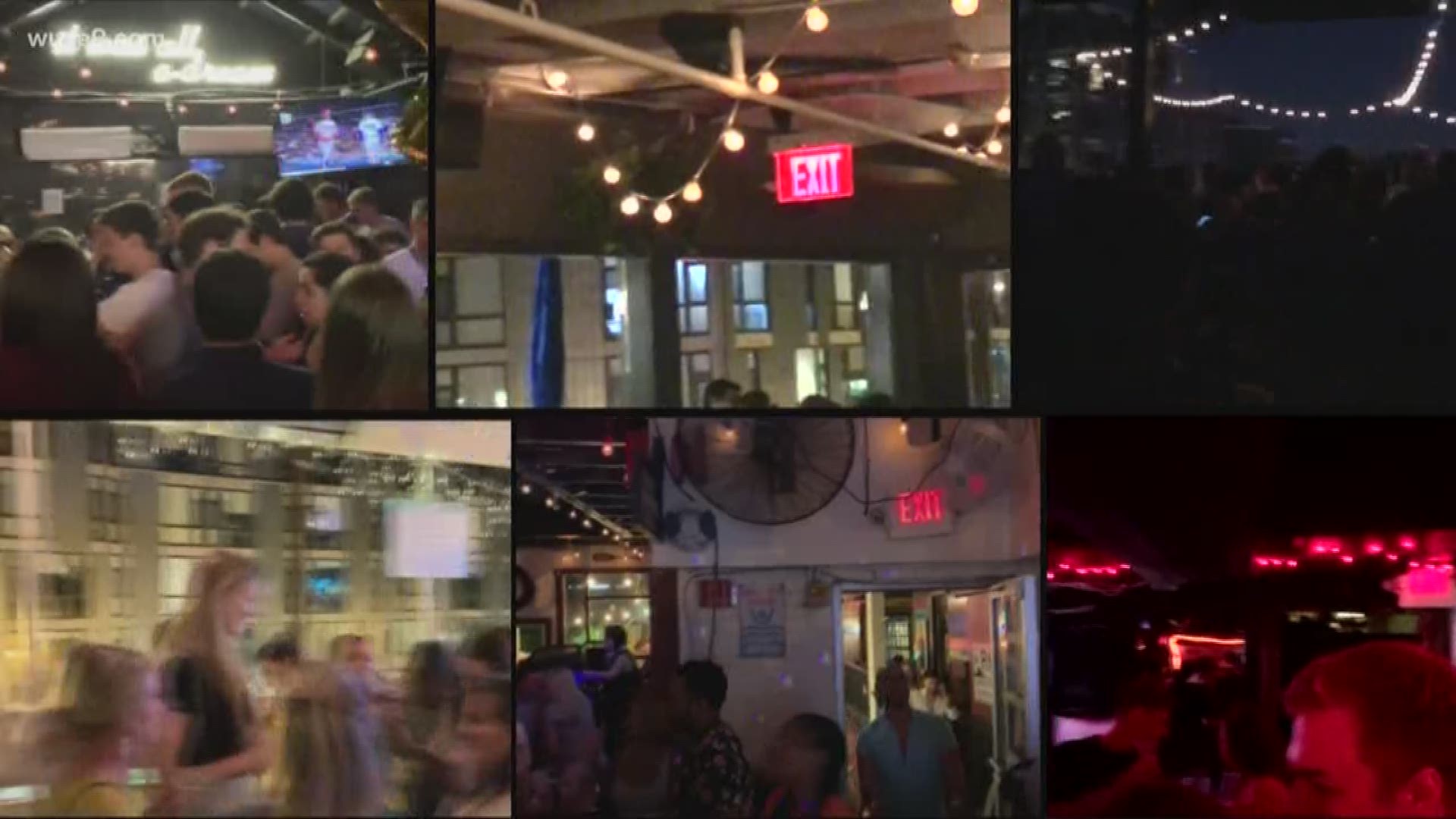 WASHINGTON -- Rooftop bars are hot right now in DC – so hot, in fact, that some have been operating for years without ever having received a fire inspection.

A months-long investigation by WUSA9 found serious deficiencies in some of the District's most popular rooftops that hadn't been caught by fire inspectors before we started asking questions.

Shawn Townsend, Director of the D.C.'s Office of Nightlife and Culture, said the city asked the owners of the rooftop bars WUSA9 reported on to meet with the D.C. Fire Marshals' office about the potential dangers seen in cell phone video captured by the investigative team.

"The goal was to make these businesses aware video captured inside of their establishments," Townsend said in a phone interview Tuesday. "And to discuss public safety and fire safety as a result of the story coming out." 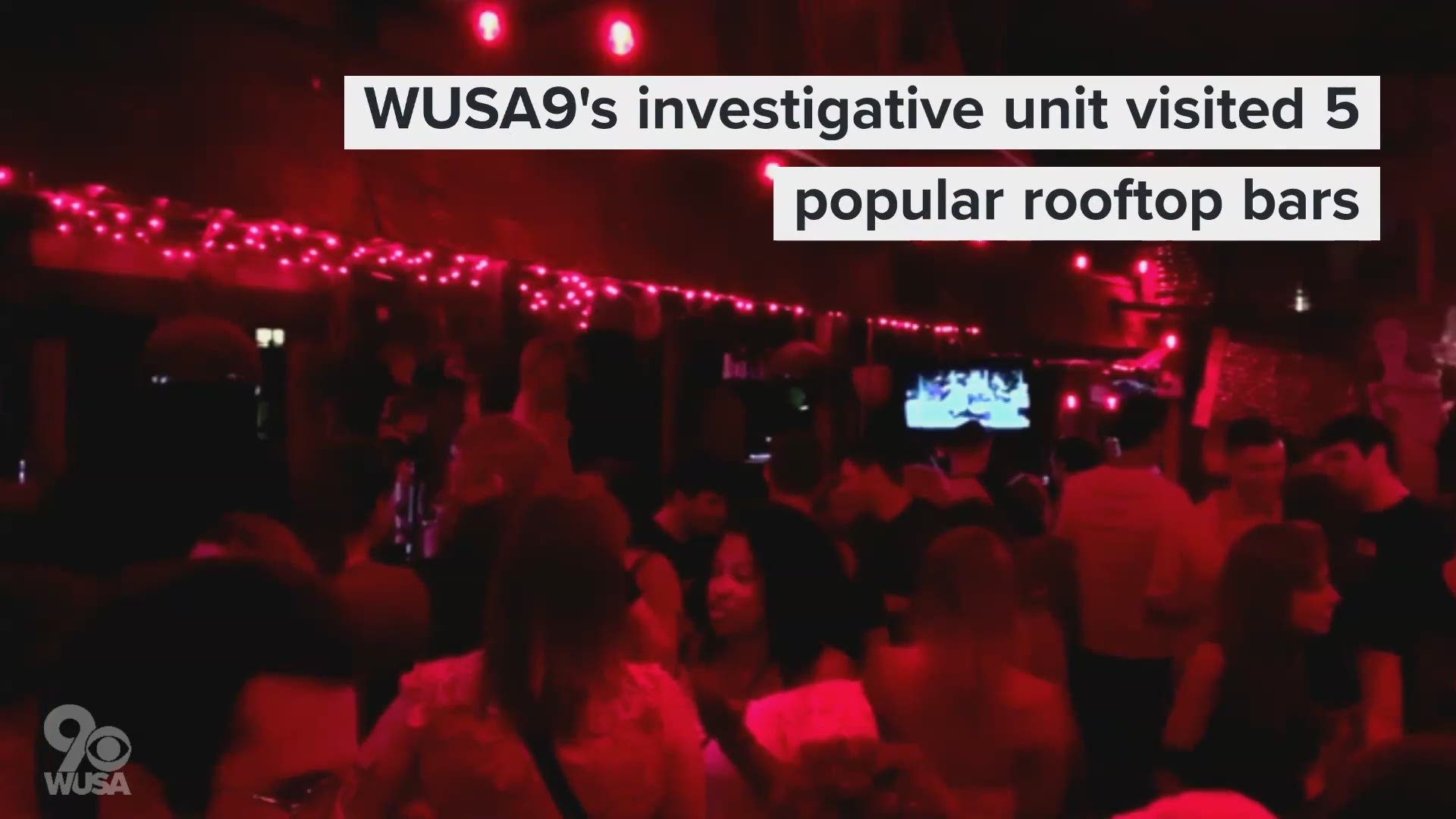 We went first to 801 Restaurant and Bar on Florida Avenue, where a sign leading to the rooftop bar reads “Good Vibes Only.” But safety inspectors would likely feel much less cheery if they saw what WUSA9’s investigative team witnessed on a Saturday night in June.

The certificate of occupancy issued by the city shows 801’s rooftop is certified for a maximum of 47 people at a time. Cellphone video recorded by WUSA9 shows a crowd of around 80 people – almost twice the number allowed.

The video also shows one of two exits from the rooftop, a narrow corridor at the back of the bar, partially blocked by chairs and kitchen equipment.

D.C. Fire Inspector Gerald Pennington said combinations like this could mean disaster if a crowd had to escape in an emergency.

“Then you’re talking about a bottleneck,” Pennington said. “And then that’s going to slow down everyone and you know hysteria kicks in, alcohol, people having a good time, so all types of things can possibly happen.”

It's not just a hypothetical. In January, a fire broke out on the rooftop deck at RedRocks on H Street during dinner hours. Fortunately, the fire was quickly contained and there were no injuries.

RELATED: Fire breaks out on the roof of popular restaurant in Northeast DC

WUSA9’s investigation prompted action by the fire marshal's office. After seeing our video shot at rooftop bars around the city, Fire Marshal Tony Powell dispatched a team of investigators.

Those investigators found a total of 69 different building and fire code violations spread across five of the rooftop bars WUSA9 visited.

Use the map below to explore the most serious violations at the five bars inspectors visited after our investigation:

Powell said 22 of the 25 fire inspectors assigned to rooftop bars, traditional bars and nightclubs work during the day, – not at night, when the establishments are most crowded. Records show Inspector Pennington visited 801 at 7:25 p.m., and according to his report he did not witnessing the overcrowding observed by WUSA9.

But Pennington did find 19 other violations at 801, including two different obstructed exits and multiple fire code violations.

In response to questions from WUSA9, 801’s ownership issued the following statement:

"It is always our intention at 801 to provide an environment which is, above all, safe and comfortable for our patrons. As a result of the inquiry, D.C. Fire Department's Fire Prevention visited and advised us of items which needed attention. We worked with the Fire Prevention Division and have remedied all issues identified. We greatly appreciate the efforts of the Fire Prevention Division as it relates to these matters, not only for helping local businesses with code compliance but also more generally for working to ensure the safety of the public. We will continue to work with our government agencies to operate a safe and welcoming environment for our customers.”

Inspectors also discovered dangerous blocked exits at TAKODA’s rooftop bar on Florida Avenue and on the rooftop at Cortez DC on 9th Street.

TAKODA and Cortez have the same operator, RJS Companies. In an email to WUSA9, RJS Companies Director of Operations Ken McClain wrote:

“As you can see by the inspection report, D.C. Fire Department's Fire Prevention inspected our venues and advised us of a number of items which needed attention. We worked with the Fire Prevention Division and have remedied all issues identified at both TAKODA and Cortez.

"The safety of our guests and staff is of the utmost importance, and we will continue to work with the fire marshal and the mayor's office to ensure that our venues are a safe and fun environment for everyone.”

Pennington says violations like the ones he finds can be the result of bar owners who are simply unaware of the requirements.

Pennington says in most cases rooftop bar owners and operators are trying to do the right thing. He says that’s the case at Madam's Organ in the Adams Morgan neighborhood.

The largest of the locations visited by WUSA9, Madams Organ features a rooftop bar in addition to four interior bars.  Across all four floors, Pennington found 21 different fire code violations.

The violations included blocked exit paths, electrical hazards and not having a fire evacuation plan in place, something that is required by law.

Credit: WUSA9
A crowded night at the rooftop bar at Madam's Organ in the Adams Morgan neighborhood.

Owner Bill Duggan says, despite all the problems, his staff does everything it can to ensure Madam's Organ is up to code.

“And the thing is that we believe it is very safe,” Duggan said. “And we feel very comfortable that if you come back tonight, and enjoy yourself, that you’re going to end up at home at some point still alive.”

More attention has been paid to bar safety following deadly nightclub fires like the 2003 fire at The Station nightclub in Rhode Island, which killed 100 people and injured another 230.

An investigation of the fire found the nightclub was more than 60 people over capacity, which helped contributed to a stampede that ultimately blocked the venue's main exit. Investigators also found that fire inspectors had missed the fact that The Station should have had a fire suppression system, but didn't.

While Pennington said most bars correct the problems he finds within days or weeks, others repeatedly break the rules, even after being cited for violations by the fire marshal’s office.

“That is a problem,” Pennington said. “It’s a real problem.”

But WUSA9 discovered that enforcement isn’t happening as often inspector Pennington and Falwell said it was.

“Each business in the district, they are all the same, the get inspected once a year,” Pennington told us.

His boss told WUSA9 that was not correct.

But that also appears to be inaccurate.

Inspection records obtained by WUSA9 revealed it had been four years since the last fire inspection at Madam's Organ and three years since Nellie's Sports Bar was inspected. And there are no records of any prior fire inspectors at 801 and TAKODA – despite the fact both opened 3 years ago.

Cortez DC, which opened at the start of 2018, had also never been visited by a fire inspector, according to the fire marshal's records.

Before a building permit is issued, the Department of Consumer and Regulatory Affairs (DCRA) does certify that the building's plans are up to code – including fire safety requirements – but finding actual fire safety violations once the business is up and running is the responsibility of fire D.C. Fire and EMS.

Doug Buchanan, chief communications officer for the D.C. Fire and EMS Department, told WUSA9 there are no written requirements in the DC Fire Code for how often bars and nightclubs, also known as public assembly occupancies, are supposed to be inspected.

This, despite the fact that the agency's own inspection priorities document says fires at those types of locations “provide an opportunity for a high-risk of loss of life.”

Falwell says his office attempts to strike a balance between safety and not hindering a rooftop bar's operation.

“You want to do what you can do, but you also don’t want to disrupt the business,” Falwell said. “You want to be business friendly but also making sure people are safe.”

Falwell said he is now trying to step up the frequency of fire inspections by coordinating with DCRA’s business license renewal, which is required every two years.

The D.C. Fire Code does lay out fines for repeated violations that can reach into the thousands of dollars, but the fire marshal says it’s rare for his inspectors to ever hand out those penalties.

None of the rooftop bars in our story were fined for the safety violations the inspector discovered.