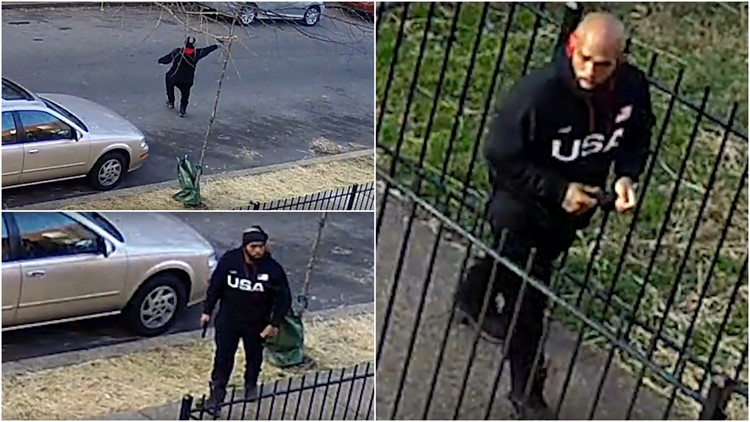 DC police look for man who put on a mask, pulled out a gun and shot into the street

WASHINGTON — D.C. police are looking for a man who put on a mask and shot into a Southeast street on Dec. 22 around 2:40 p.m. They're looking for him in reference to what they're calling an assault with a dangerous weapon.

Officials said the incident happened in the 3000 block of Buena Vista Terrace in Southeast. In a video provided by MPD, the man is seen walking on a sidewalk along a street in Southeast. The man stops and looks into the street.

Then the man puts on a mask that covers the back of his head, part of his forehead and chin. His face is still visible.

Then he's seen pulling out a gun and shooting into the street from the sidewalk.

In the video the man walks toward the street and starts jogging. Then he slows down and starts shooting again.

The man then walks back to the sidewalk still carrying the gun, and he puts it back in his pocket.

D.C. police are looking for the man seen in the video.

D.C. officers are also looking for a 27-year-old man that they believe shot and killed 26-year-old Xavier Tate on Monday in 1400 block of 3rd Street, Southwest, around 5:30 a.m.

D.C. Police said Bratrell Hawkins is the suspect, and that he currently has an arrest warrant out charging him with second-degree murder while armed.

Bratrell is from Southwest and is considered by police to be armed and dangerous.

Police and first responders arrived on Monday, Jan. 5, to find Tate shot multiple times. He would be transported to a local hospital for his life threatening injuries, but would later die at the hospital.

An initial police investigation confirmed that the shooting happened inside a home. What led to the shooting or its alleged motive is not known.