Flags are being flown at half-staff in her honor 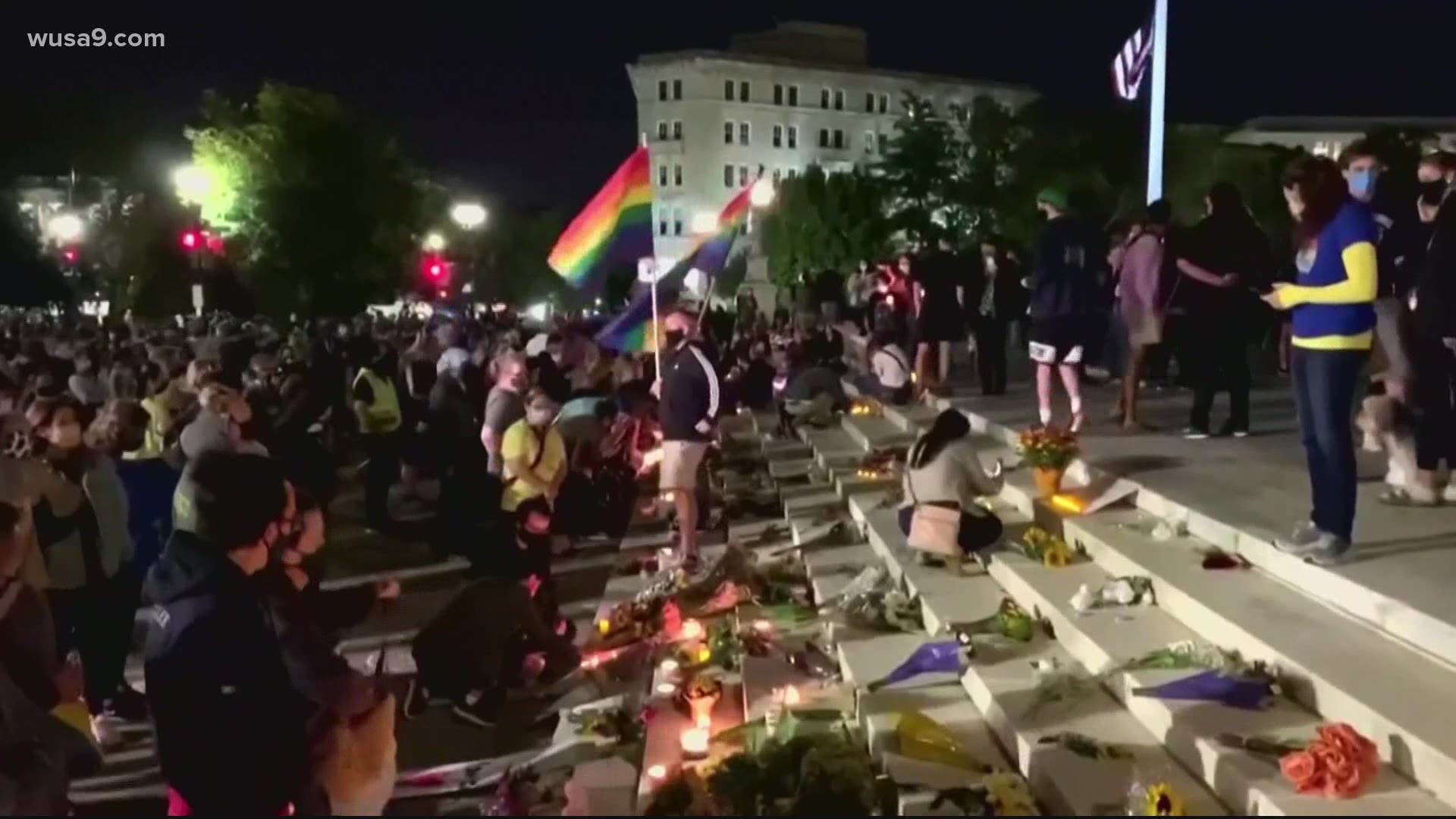 Locally, leaders are honoring Ginsburg following the news of her death from complications of metastatic pancreatic cancer.

D.C. Delegate Eleanor Holmes Norton, who knew Ginsburg as a friend for 50 years and worked with her as a lawyer, issued the following statement Friday:

“Justice Ginsburg’s brilliance made her a leader on the Supreme Court even when she dissented, but she was making new law long before she was able to do so as a Justice.

“I introduced Justice Ginsburg at her Senate hearing when she was nominated by President Bill Clinton. There, I spoke of her historic achievements even before she served on the U.S. Court of Appeals for the District of Columbia Circuit. I was assistant legal director at the American Civil Liberties Union (ACLU) when Justice Ginsburg founded the ACLU Women’s Rights Project, though she was not a paid member of the staff. There, she did some of her most historic work, including her successful argument before the Supreme Court that established the now axiomatic principle that the 14th Amendment’s Equal Protection Clause applies to women.

“Although a feminist in her quest for equality for women, her principled understanding of equal treatment lead to her victory in the Supreme Court case that held that male caregivers should have the same benefits as women in that role.

I introduced Justice Ruth Bader Ginsburg at her Senate hearing when she was nominated by President Bill Clinton. There, I spoke of her historic achievements… pic.twitter.com/Pn4FbZT09c

“We have lost a champion of justice, an icon and patriot, a woman who lived the concept of building a more perfect union. Justice Ruth Bader Ginsburg fought for us until the very end, and it is that fighting spirit – that we were fortunate as a nation to benefit from time and time again – that made us love, respect, and admire her. Tonight, we are heartbroken. We are grateful for one life lived so fiercely that it forever changed the lives of millions. We send our condolences to Justice Ginsburg’s family and loved ones and to a nation already in mourning, trying once again to fathom a monumental and devastating loss.”

RELATED: VERIFY: Yes, the president can nominate a replacement for RBG before the end of his term

"Supreme Court Justice Ruth Bader Ginsburg was a revered jurist, a trailblazer for women's rights, and a fierce advocate for justice. Throughout her 27 years of service on our nation's highest court, and multiple battles with cancer, she displayed undaunted courage and resolve.

On behalf of a grateful state and nation, the First Lady and I send our heartfelt condolences to Justice Ginsburg's family and loved ones during this difficult time. She will be deeply missed."

“It is with the deepest sadness that Pam and I mourn the passing of Supreme Court Justice Ruth Bader Ginsburg. She was a giant on the court, a brilliant legal mind, and an unwavering beacon in the fight for equal justice and gender equity. Justice Ginsburg’s eloquence and passion made the world better and fairer—that includes ensuring my alma mater, the Virginia Military Institute, admitted women as cadets. Her loss leaves a tremendous void on the Court and in this country. May her legacy in the pursuit of justice live on, and may her memory be a blessing.”

As one of nine women in a 500-person class at Harvard Law School, Ginsburg balanced her legal education with that of her husband, a fellow law student, who was sick with testicular cancer - all while raising a young daughter.

Ginsburg was the second woman to serve on the Supreme Court. But her legacy as a force for gender equality was cemented decades earlier. She appeared before the Supreme Court six times as an attorney, in a wave of cases decimating entrenched assumptions about gender roles that had been long used to justify unequal treatment of women and men in the courts.

Early in her Supreme Court tenure, she wrote the court's 7-1 ruling that the Virginia Military Institute could not remain an all-male institution. In 2018, she vocalized support for the #MeToo movement. Ginsburg was a fierce protector of Roe v. Wade, the 1973 case that gave women a constitutional right to abortion and, she said, affirmed their full equality and humanity. And this year, Ginsburg used her seat to codify protections for LGBTQ+ workers.

Flags in D.C., Maryland and Virginia have been lowered to half-staff in her honor.