As DC plans for the 2021 inauguration, the Trump administration still owes the city millions

'The federal government is sometimes slow, but this is worse than slow,' D.C. Delegate Eleanor Holmes Norton said. 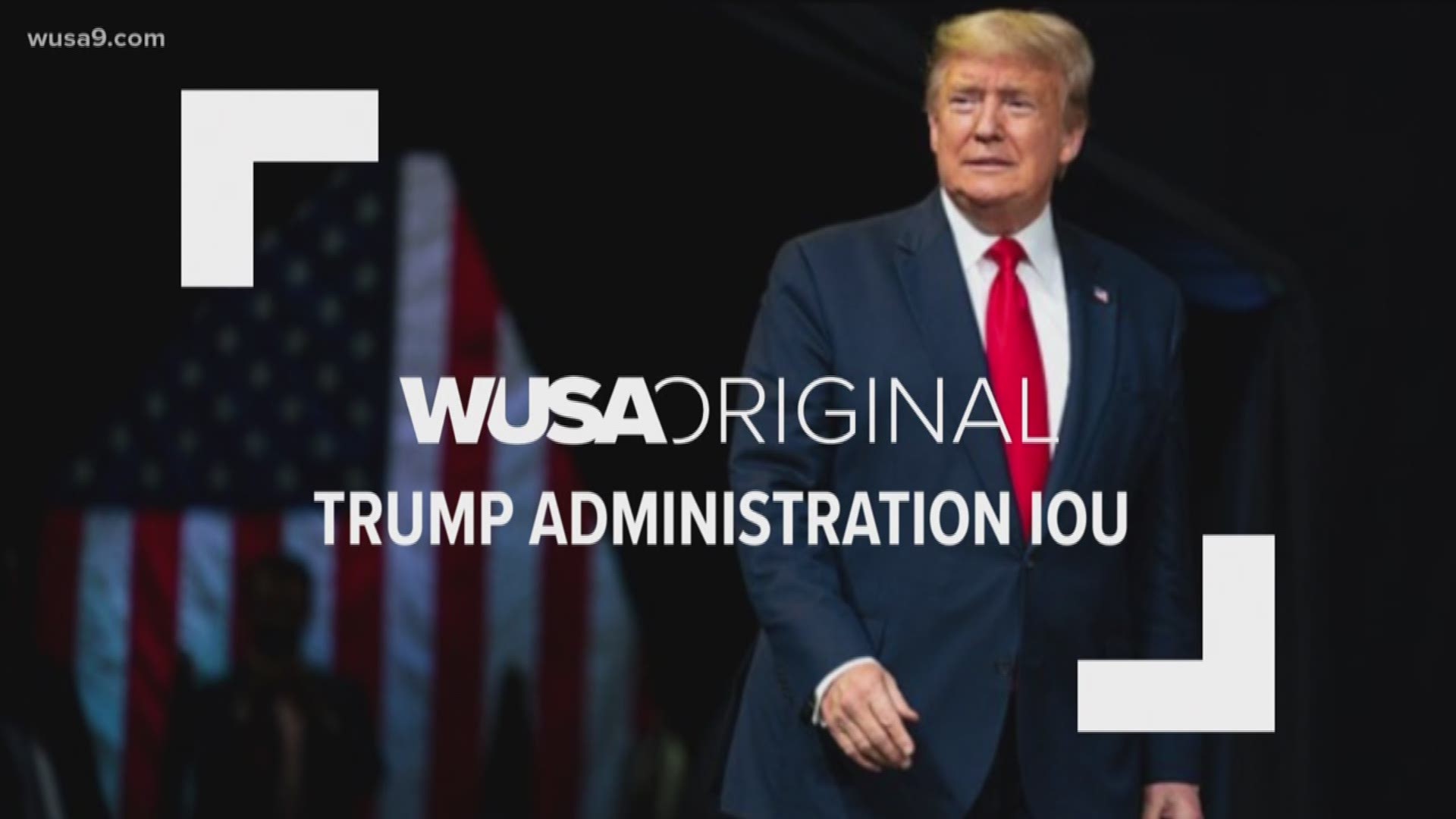 WASHINGTON — Many D.C. agencies are already preparing for the 2021 Presidential Inauguration. Planning began late last year, with a big focus on security.

When it comes to protecting Washington and the region, it’s all hands on deck – especially when it involves the President of the United States.

Since it’s a huge task, the federal government needs support from Washington, and they’re required to pay the city back for helping keep the president safe.

For instance, during President Trump’s State of the Union address in early February, federal agencies huddled in D.C.’s Emergency Operations Center to make sure any threats were quickly neutralized, with D.C. Police, the Department of Public Works and DC Fire and EMS providing cover.

Chris Rodriguez, the director of D.C.’s Homeland Security and Emergency Management Agency, plays a key role during hundreds of big events every year.

"Our partners that come to this room here know exactly where to sit. They know who they're talking to because those partnerships are so strong,” Rodriguez said, pointing out the layout of the agency’s command center.

Rodriguez insists the partnerships are strong, even though the federal government still owes D.C. taxpayers millions of dollars for help provided by city workers in the past, according to District financial records.

This debt started when President Trump took office in 2017.

Trump's current tab with the District of Columbia includes:

“The federal government is sometimes slow, but this is worse than slow,” D.C. Delegate Eleanor Holmes Norton said.

She is still working to get some of the city’s money reimbursed.

“This is a debt. We’ve submitted the proof. We need to get our money back,” Norton said.

City leaders said during the Trump presidency, the federal government hasn’t been paying its share to keep the city and president safe.

During this contentious election year, they’re worried about even more demonstrations to come.

For support from the city, the feds usually put money into the D.C. Emergency Fund every fiscal year. It usually adds up to $13 million.

The money is used to respond to terror threats, help the Secret Service and protect demonstrators.

D.C. leaders said they’re depleting this pot of money every year because of greater expenses.

"A lot of the burden and a lot of the costs of successfully carrying them out does fall to District agencies,” Rodriguez said.

It's having a deeper impact, according to D.C.'s budget office.

The city must pull money from its own emergency fund meant to secure local events, like the Washington Nationals' World Series celebrations.

It also eats away at D.C.’s budget surplus.

By law, at the end of the year, all the city’s extra money must go toward building schools, recreation centers and affordable housing.

"Delaying it matters to the city. We'll get the money,” Norton added.

Delegate Norton and Mayor Muriel Bowser have written to federal agencies repeatedly to get the money returned.

The White House had no response to our request for comment.

However, the National Park service did issue a statement regarding the $78,000 for cleanup during the government shutdown.

"The National Park Service appreciates the District’s assistance in maintaining the National Mall during the lapse in appropriations. We understand the importance of this issue and will respond to Mayor Bowser on the status in the coming days,” NPS Spokesperson Mike Litterst said.

Congress also increased the D.C. Emergency Fund to $18 million, but only for this fiscal year.

“We’re always going to be doing our jobs regardless of what the environment is around us,” Rodriguez vowed.

In President Trump’s budget proposal, he wants to provide D.C. with the nearly $35 million city leaders requested for the next 2021 presidential inauguration, but that still doesn’t address the more than $7 million owed for the 2017 inauguration.

President Trump also wants to put $16.5 million into the D.C. Emergency Fund, although Mayor Bowser has requested at least $18 million.