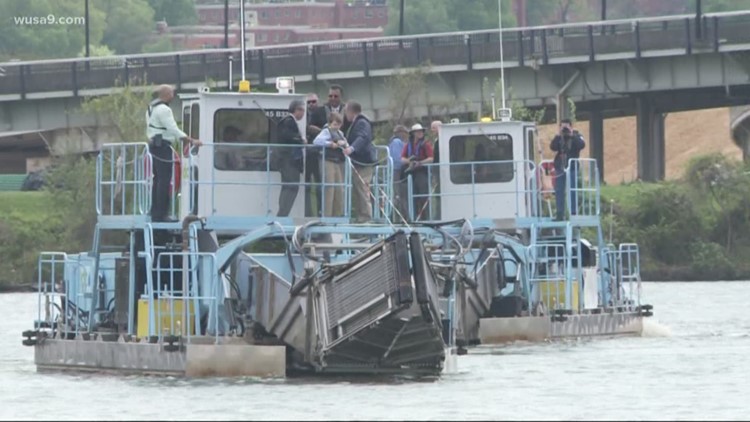 Photo by: WUSA9
Trawlers float down the Anacostia River during Earth Day.

DC has no maximum daily limit for E. coli discharge into waterways. Now, a judge says they have a year to fix it

WASHINGTON — The current E. coli limits for the Anacostia and Potomac rivers violate the Clean Water Act, according to a federal judge who gave the agency a year to bring the rules into compliance.

In a memorandum opinion filed Monday, U.S. District Judge Christopher R. Cooper found that the EPA failed to approve absolute maximum levels of E. coli that can be discharged into the District’s waters on any given day.

The current rules, approved in 2017, allow for a variable daily maximum calculated from a monthly maximum. The rules were challenged in a federal lawsuit by Anacostia Riverkeeper, the Kingman Park Civic Association and the Potomac Riverkeeper Network. The lawsuit was filed on their behalf by attorneys with the non-profit environmental law organization EarthJustice.

In their lawsuit, the groups argued that without absolute daily maximums for E. coli discharge, the District’s waters could have dangerous levels on any given day while still being in compliance for the acceptable monthly amount.

The plaintiffs note that in a 2014 water quality report to Congress and the EPA, the District noted that fecal bacteria concentrations in some District waters “exceed the criteria between approximately 4 and 42 percent of the time.”

E. coli is an intestinal bacteria that can cause severe abdominal cramps, bloody diarrhea and vomiting. Humans can be exposed to the bacteria by eating raw vegetables or uncooked meat, or by coming into contact with contaminated water – for example, sewage overflows caused by heavy rains.

D.C.’s waterways are particularly susceptible to the latter threat because the city has vastly outgrown the capacity of its combined sewer system, which channels stormwater overflow through the same pipes as sewage. Heavy rains can cause the system to overflow – bringing dangerous bacteria with it.

RELATED: Here's where in DC you should treat floodwater like it's sewage – because it probably is | DC FLOOD MAP: Where in the District has the highest risk?

During just one particularly heavy rainfall in July, D.C. Water estimated that 50 million gallons of combined sewage overflowed into the District.

“Because periods of prolonged or intense precipitation in the District largely coincide with the outdoor recreational season, District residents and visitors are frequently at risk of moderate to severe illness when they use and enjoy the District’s waters for kayaking, canoeing, and other such popular aquatic recreational activities,” the group’s lawsuit said.

To at least partially remedy that, the group sought to force the EPA to establish absolute daily maximums for E. coli discharge, as required by the Clean Water Act.

RELATED: These popular recreational areas in the DMV are toxic algae hot spots

In his opinion, Judge Cooper said the situation was like a family seeking to craft a budget to rein in its spending:

“Imagine a family seeking to rein in its spending. To that end, it budgets $500 a month for groceries. But it keeps blowing past that cap, so it ties itself to the mast: it sets a daily maximum of $30 to help achieve the $500 monthly budget. It knows that it will not spend that much each day—nor can it and stay within $500 for the month. But it wants to make sure the occasional steak night doesn’t get out of hand. With its daily maximum, even on its most splurge-happy day, the family will have a daily spending cap and stay on track to spend $500 for the month. The CWA allows the District to set a monthly pollution budget rather than a daily one. But where, as here, that budget is in jeopardy, the Act requires a daily maximum, too.”

Cooper’s ruling keeps the current E.coli discharge standards in place for one year to allow the District to develop new standards or the EPA to revisit its regulations.

RELATED: A swimming pool in the Anacostia? Study calls it 'feasible'