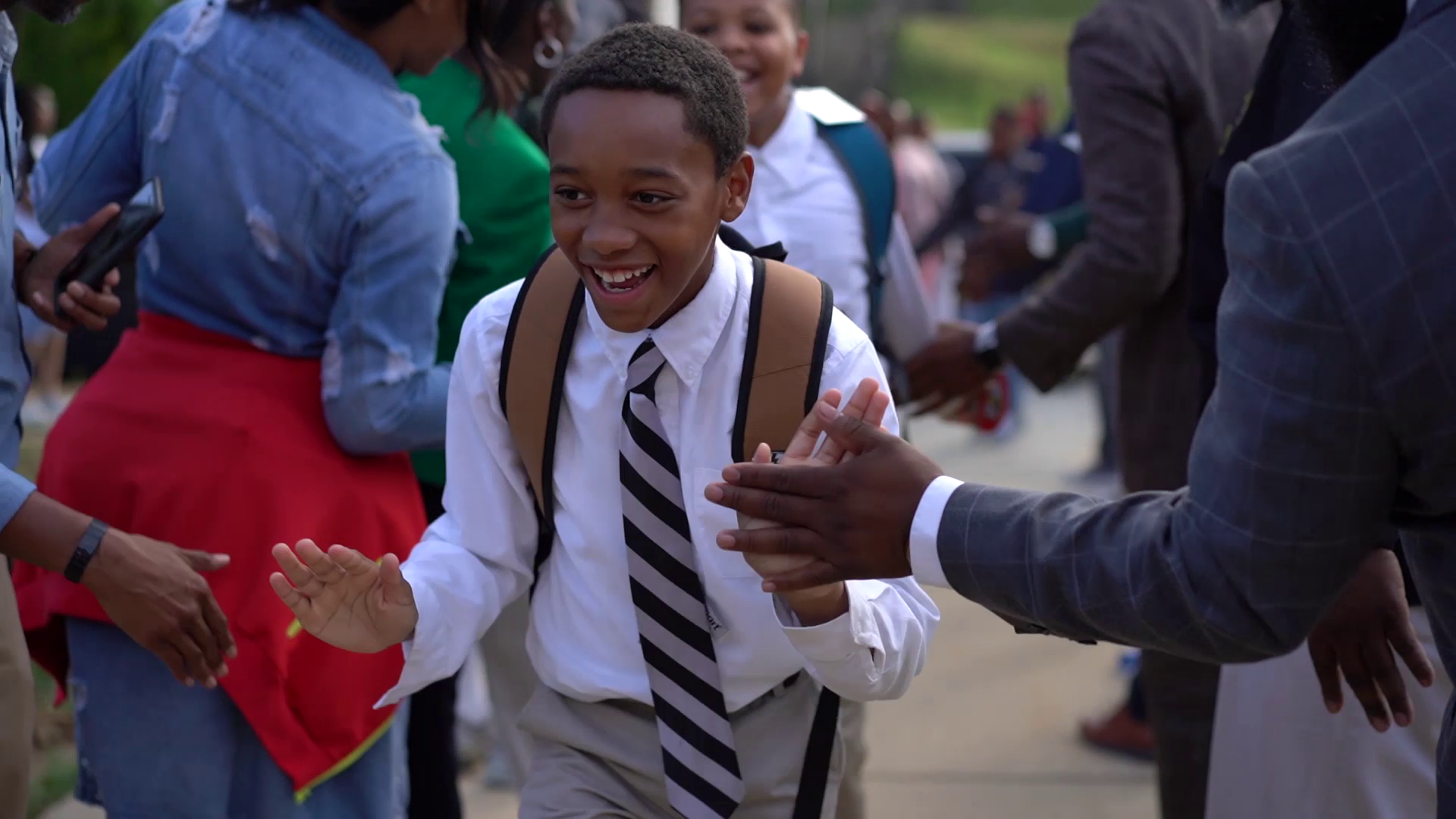 WASHINGTON — When Statesmen College Preparatory Academy was enrolling students for the fall of 2018, Kevin and Satira Corbitt weren’t completely sold on the new school.

“It was a startup and what we know about startups is, it’s hard. Those first couple of years, you don’t have any cred. There’s no history. No test scores,” Satira said.

After several meetings with Statesmen's founders, the Corbitts decided to take a risk and let their oldest son, Kiye, be part of the school’s inaugural class.

Statesmen College Preparatory Academy begins in fourth grade and will add a new class each fall, up until eighth grade.

While Kiye’s parents had reservations at the outset, he was ready for a new start

“They get us. They understand how we are,” Kiye said about the school’s teachers and administrators.

One of the school’s founders, Shawn Hardnett, started as a teacher but spent the last decade training dozens of principals in D.C.

“Boys in Washington, D.C., in our nation’s capital, where resources are better than they are in other places, were struggling more than in other places where there are considerably less resources," Hardnett said.

Hardnett and Statesmen’s other founder, Rictor Craig, promised to change the way boys of color are educated in the District. The school went viral on the first day of class when 80 black men showed up to welcome the boys.

"Boys of color are just dissed. Disengaged, disenfranchised, discouraged. They get dissed every day," Craig said.

“The more male and the more brown you are, the more difficult you’re going to find it to be successful in a traditional school. In a public school of any sort,” Hardnett said.

Only 74% of black boys and 60% of Hispanic boys in D.C. graduated on time last school year – compared to 95% of their white classmates – according to data from the D.C. Board of Education.

RELATED: DC charter schools put up fight against legislation that would make them more accountable to the public

Hardnett said based on his experience, he believes many schools and education programs in the District are reaching the most vulnerable students too late.

“If they get to sixth grade, a couple of things happen to adolescents at 11, 12, 13 that are already locked in and you’re doing much more work to turn that around. In fourth grade, if you can reset before they set, they stand a chance,” Hardnett said.

Statesmen says it has a 96% attendance rate, and that nearly all fourth graders returned for fifth grade.

“My old school, I guess I had too many distractions kind of stopping me from learning. It didn’t feel like I was at my maximum capacity of learning. Here, it feels like I’m actually learning something. I’m actually growing,” fifth-grader Harley Mitchell said.

Statesmen is trying to chart a different course for the boys and their families.

“We give our families everything. They don’t have to pay for anything related to school. Uniforms, shoes, school supplies. Everything associated with school we take care of,” Craig said.

They have traditional English and math lessons, but they're infused with popular black culture to help students better understand the subject.

History class is a different story.

At Statesmen, it’s called KINGS 101, as Black history is standard.

With 130 students, it’s mandatory for teachers to keep them active most of the day. There’s required reading between classes and, in the classroom, competitions are a key part of the curriculum.

"Life is a competition. You're going to fail a bunch of times, but equally, you shall succeed,” English teacher Kristin Hart said.

There are plenty of incentives for students who excel in class and demonstrate good behavior. A golden ticket to the game room is what many scholars look forward to earning daily.

“My favorite part of the day is the game room,” Kiye said.

Though movement and momentum are priorities at Statesmen, sitting still is just as important. Students and teachers have scheduled mindfulness sessions each week with Student Life Director Nicole Mayes.

During one-on-one sessions, students and teachers can practice yoga, meditate and draw.

Statesmen teachers said the way black boys behave is often misinterpreted, and that's where the disconnect begins. But at Statesmen, only two students were suspended during all of last year.

"Their moments of emotional discomfort are often feared. So, they're deemed as special ed or they need to go to the ISS class because they might do something. They're just a bigger kid with the same tantrum as a child of a different race,” Hart said.

RELATED: DC high schools awarded for bold new approach to education in some of the most violent neighborhoods

One fifth-grader said he was one of the smartest students at his old school, but started to lose interest in learning and never felt valued because of the color of his skin.

“Out of 500 kids at that school, there were about 15 black kids. I feel like they thought all of us were aggressive or had a learning disability. Things like that,” Jaylen Link said.

Credit: SCPA
Statesmen's inaugural class at summer camp ahead of the 2019-2020 school year.

Academically, only 11% of students at Statesmen are proficient in English and about 17% in math, according to District data.

Hardnett said half of the students are considered at-risk of failing by the District and a quarter are deemed special education, which is a higher concentration than many other schools.

RELATED: 'After all the damage, now they want to sell?' | DC charter school leaving before it opens

Most of Statesmen's students live in D.C.'s Wards 7 and 8, where poverty and crime are high.

Still, with one year down, Hardnett said this is the right approach and believes most students will be at grade-level or higher when they leave for high school.

“What we need is time. Time and concentration. Focus like crazy.”

The school does have its critics.

The ACLU said in a statement, “The rationale behind sex-segregated academic programs is bad for kids. These programs are often based on questionable science about how girls' and boys' brains develop and on disturbing gender stereotypes.”

Hardnett said some have also questioned a public school focused on black and brown boys.

As for the Corbitts, they’re now convinced Statesmen is the right answer for Kiye and are planning to send their younger son when he starts fourth grade next year.

"When you walk out the door and turn on the TV, you know very much you are considered a minority. You know very much that there are some things that are stacked against you, so, it's kind of like a retreat for a few hours a day,” Corbitt said.

Statesmen is now enrolling fourth graders for the next school year. There’s currently a waiting list for fifth and sixth grades.

RELATED: Get Up DC gives $1000 to Leveling the Playing Field

RELATED: From trouble school to an inspiring place to learn: Kipp DC's transformation