Hundreds of D.C.-area students used President's Day to speak out about gun violence outside the White House. 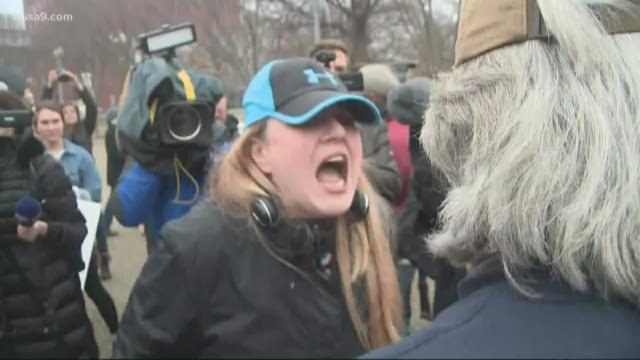 Hundreds of D.C.-area students used President's Day to speak out about gun violence outside the White House.

Whitney Bowen and Eleanor Nuechterlein, both juniors at a D.C.-area high school, organized a “lie-in” on Monday through the organization they created: Teens For Gun Reform, which they formed after hearing about the Florida school shooting.

Both students said the shooting, where a former student shot and killed 17 people in Marjory Stoneman Douglas High School with an AR-15-style semi-automatic rifle, affected them.

“You never think it’s going to be your school, or your family, or your friends, except last week there were a dozen students that went to school for the last time,” said Bowen.

1 / 9
Demonstrators lie on the ground during a "lie-in" demonstration supporting gun control reform near the White House on February 19, 2018 in Washington, DC.

They originally planned on having 17 students lie on the ground in front of the White House–one for each person killed in the Florida school shooting. But even more students joined in the demonstration. Nuechterlein and Bowen attended the protest with more than 60 friends from school.

They were planning to lay in front of the White House for a total of three minutes to symbolize how quickly the shooter was able to get an assault rifle. But hundreds of young people sprawled out on Pennsylvania Avenue for 15 minutes or more, some weeping as they thought about the people who had died.

"The fact that I have to go to school and be scared is not right," said Ellie Asher, 15, her voice breaking. "There's nothing right about it."

Their goal? To send a message about gun violence.

“We want to send a message to politicians, tell them that they need to do something about it, and it’s their responsibility, because they’re the voice of the people and we’re the people,” Nuechterlein said in an interview with WUSA9 Sunday.

And, according to the students, the message has already been received by one politician through “the power of social media.” Local Congressman Don Beyer, who represents Virginia’s 8th District and has advocated for gun reform, attended the protest.

“There are scared kids sitting in classrooms every day, that don’t need to be scared, because politicians have the power to change things,” said Bowen.

Bowen and Nuechterlein aren’t the only students to organize protests around gun violence. Survivors of the Parkland shooting have announced a “March for Our Lives” demonstration on March 24. Several other demonstrations nationwide are also being planned.