Two dockless bike companies put the brakes on their DC operations. So what's the future for the two-wheeled ride-sharing industry in the District? 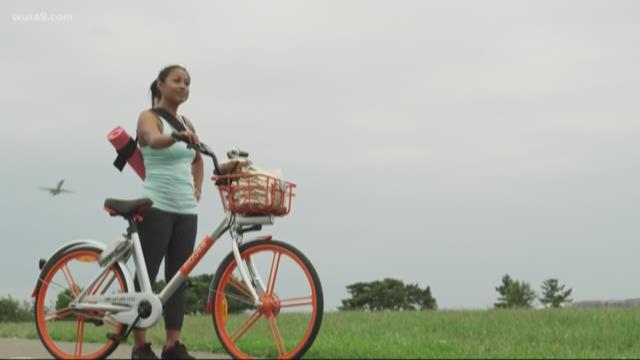 WASHINGTON - Two dockless bike companies put the brakes on their D.C. operations. So what’s the future for the two-wheeled ride-sharing industry in the District?

George Rallis typically rides his own bike, but he also uses dockless bikes.

"The more bikes around the better because it eases up on traffic. I'd much rather be on a bike on a trail than being stuck in a car in all this traffic. I'd really appreciate having the bikes available," Rallis said.

However, fewer bikes will be available. Dockless bike companies Mobike and Ofo recently announced they're shutting down D.C. operations.

RELATED: Survey: How do you feel about DC’s dockless bike program?

The city's permit allows dockless bike companies to operate a maximum of 400 bikes. Mobike said The District's bike cap is why they're leaving.

Under city rules, bikes must be placed in all eight wards of the city. However, there's not enough demand in some areas and Mobike said it's bad for business. The company said it is seeing success overseas, where rules are more relaxed.

Mobike was one of several companies participating in a city pilot program that began last September.

Some D.C. residents said they won't miss the dockless bikes, mainly because they're dropped off in strange and sometimes unsafe locations.

"Its a relaxed time for me get away from all the stress from work and all that kind of stuff," Rallis said.

Five dockless ride sharing bike companies will continue to rent bikes and scooters in D.C.; including Lime. A spokesperson for Lime sent us this statement:

“We think there is incredible opportunity to actually grow the dock-free bike share and scooter fleets. We are investing in D.C. to provide affordable, reliable transportation options to meet the needs of residents—and could serve even more riders if we’re allowed to expand our network beyond the current cap."