Throughout the weekend thousands of people flocked to the area in front of the White House to celebrate Joe Biden’s projected presidential win. 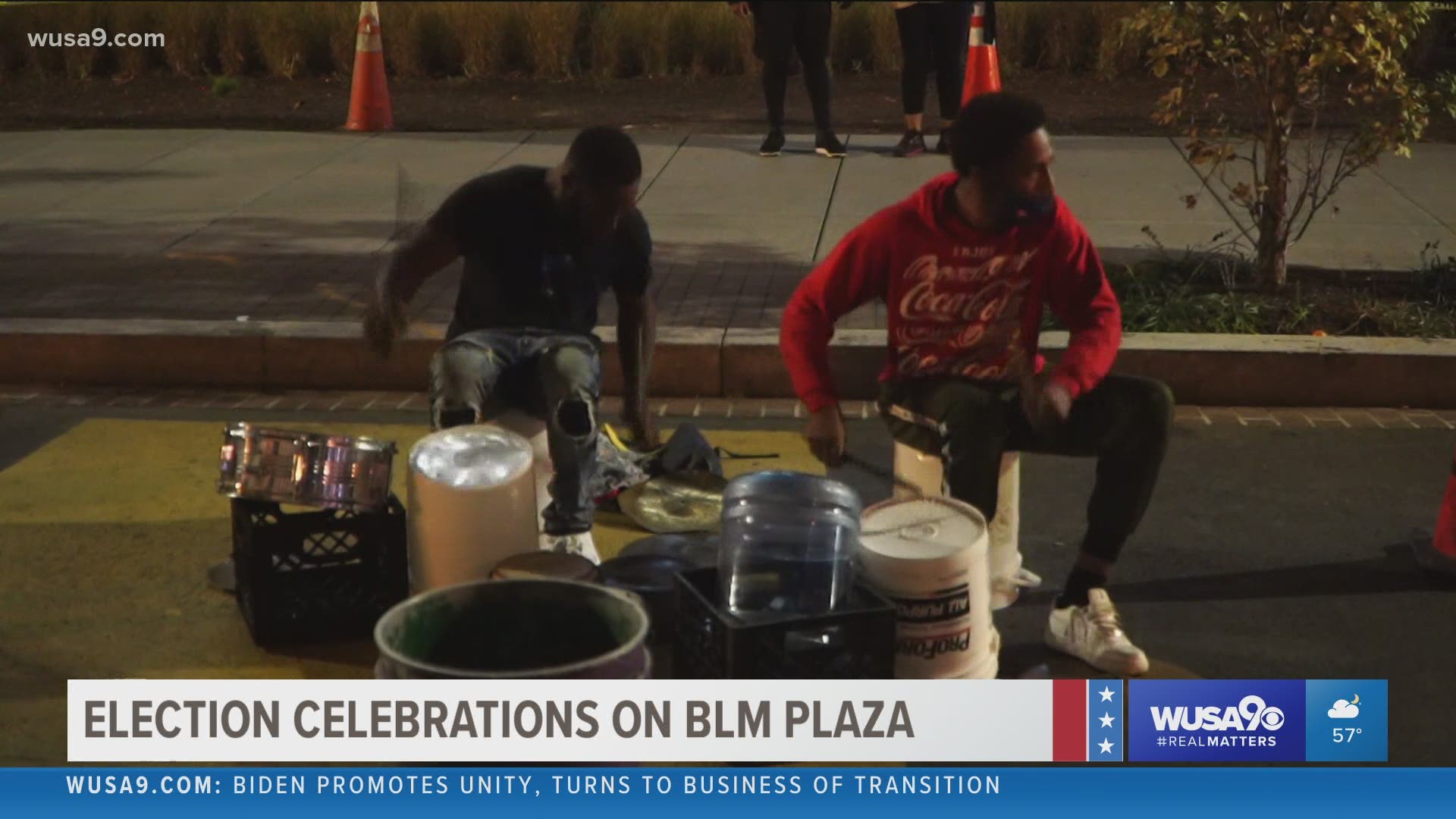 WASHINGTON D.C., DC — In a city where The Associated Press projected Joe Biden received 93% of the presidential votes, the District celebration continued Sunday night in front of the White House.

Throughout the weekend, thousands of people made their way to Black Lives Matter Plaza and the areas surrounding the White House to celebrate Joe Biden and Kamala Harris’s projected presidential win.

On Sunday night, people were dancing on Black Lives Matter Plaza in a block party-like celebration.

RELATED: 'This is a moment of joy' | DC reacts to projected Biden victory with cheering, singing, Champagne

“It’s so much unity. We haven't had this for years and I'm just so excited for our country to come together for my children and my children’s children,” Danielle Parker said.

A giant ‘Wobble’ dance is happening right now on Black Lives Matter Plaza in front of the White House.
They’re calling this a “victory dance”

BLM Plaza has felt like a giant block party since the #Election2020 results were announced yesterday @wusa9 pic.twitter.com/9QkUzTlgXd

The dancing and celebrating happened a block away from where one business began the process of taking the plywood down. Many of the buildings surrounding the White House were boarded up ahead of the election.

D.C. officials asked all businesses and property owners on Sunday to remove any boards and fencing put up last week.

Boarded up businesses in DC are starting the process of taking the plywood DOWN.

This morning a DC official asked all businesses and property owners to remove boards and fencing that were put up last week across the District.
Tonight it looks like that is starting. @wusa9 pic.twitter.com/WrNgoqZRcG

Fencing that encompassed the Ellipse and Lafayette Park could remain up until November 11, according to a release from the National Park Service. Later than it had originally planned to be up.

The fence request was made from the U.S. Secret Service as a “need to quickly de-escalate potentially violent encounters," according to the National Park Service's statement to WUSA9.

This is the scene outside of the #WhiteHouse this evening.

Some have their arms wrapped around one another while others are dancing. @wusa9 pic.twitter.com/UO0idQvcya

The fence didn’t stop people from celebrating, with hundreds dancing and mingling through the streets in front of the White House Sunday evening.

“The past four years has been something we have never seen before,” Parker said. “We have never had this much division and so for us to just come together as people, it’s not about Republican and it’s not about Democrats, it’s about the American people. And we’re just excited to be united again.”

Inauguration Day construction is underway in front of the White House.
The Joint Congressional Committee on Inaugural Ceremonies said the theme for the 59th Inaugural Ceremonies is “Our Determined Democracy: Forging a More Perfect Union.”@wusa9 https://t.co/wNVpZyf923 pic.twitter.com/yWzEry4iOn

RELATED: Verify: Joe Biden is not the 4th challenger to beat an incumbent president