A fight broke out during an anti-NPI in D.C.

Police had to get involved Saturday afternoon, after a protest turned violent on Pennsylvania Avenue. 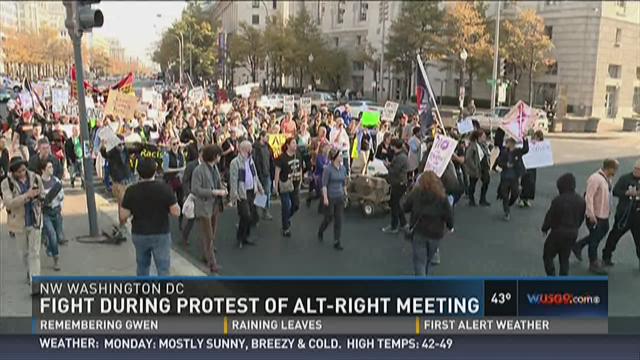 Police had to get involved Saturday afternoon, after a protest turned violent on Pennsylvania Avenue.

Approximately 300 protesters were gathered outside of the Reagan building, to voice their concern with the National Policy Institute, a group that has been called anti-semitic, racist, and xenophobic. When two people, claiming to be NPI staff, entered the crowd with a camera, they were attacked by some members of the crowd.

NPI was in town for an annual convention, which often invites protest. The protest this year was intensified due to the recent election, as many of the signs were anti-Trump as well.

"White nationalism is ugly," said Eric Hamlin, who was protesting. "It's gross."

"I'm a person of Jewish faith," said another protester, who went by Zay. "I don't want any Nazis in my city. I don't want them in my country."

The protest began peaceful, but turned violent when two advocates came out for NPI. Emily Youcis was joined by a photographer, as she tried to ask people in the crowd questions.

"Do you hate white people," she asked one protester.

Shortly after the questioning began, a protester spray painted Youcis' hair. Minutes later, a fight broke out (31 minutes into video above), as protesters appeared to have attacked the photographer. Police had to break the fight up, and the photographer was left with a bloody gash on his forehead.

"I think they're the racists here," Youcis said shortly after the attack. "Because I've been sprayed in the face, I've been told to f*** off, they bloodied my cameraman, and stole his phone. They're the violent people."

At least two protesters were put in handcuffs, although it's unclear if any arrests were made. Most of the protesters remained peaceful, although vocally against the organization. Many in the crowd began chanting monikers like "Nazi scum," "white supremacists," or "fascists" when the duo tried to speak.

After protesting outside of the Reagan building, the group marched to the Trump International Hotel, where it took on a poltiical tone. While the primary target was NPI, there was plenty of anti-Trump chants as well.

Pat Loveless, who decades ago lost six fingers in altercations with the KKK, said this fighting takes away from their message.

"Nobody needs violence," he said. "You're not going to solve anything. Because we're preaching the same thing we're marching against."