Public housing advocates say some residents could be evicted, but public housing officials insist nobody will be evicted as part of its major overhaul. 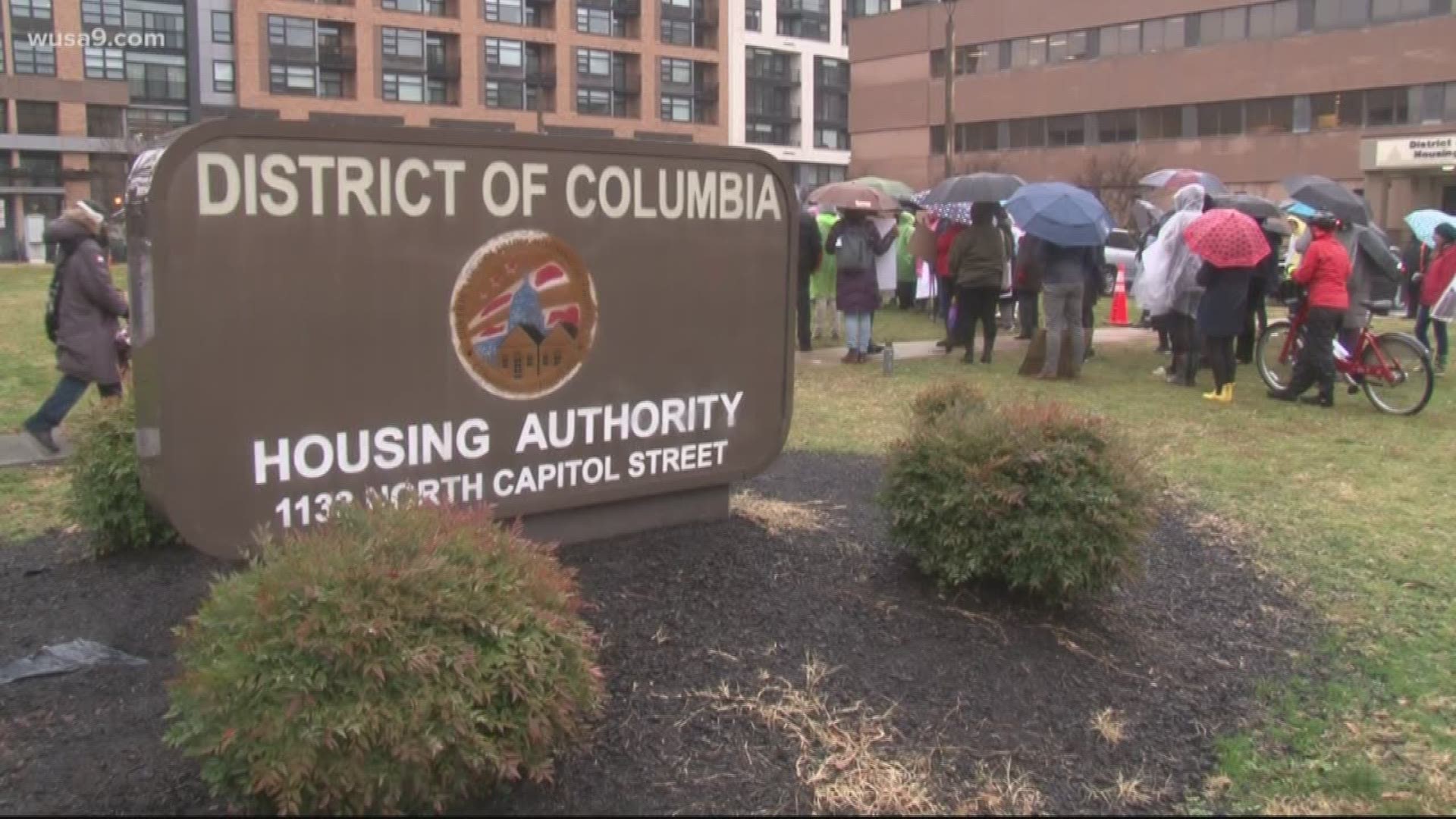 WASHINGTON — Public housing residents and advocates took their demands to the doorstep of the D.C. Housing Authority Monday, demanding that no residents are evicted as part of the agency’s 20-year transformation plan.

"Living every day in public housing, there’s a threat of homelessness in everybody’s heart," Karen Settles of Stoddart Terrace in Southeast, said.

Public documents said her building will be demolished and redeveloped as part of DCHA’s Transformation Plan, rehabilitating 14 properties across the city.

"No one is being evicted as part of the transformation process," Jose Sousa, who leads public affairs for DCHA, said.

Even still, public housing advocates said residents are at risk.

"They are absolutely evicting people," Aja Taylor of Bread for the City, said.

"They are evicting people from properties that are unlivable," Taylor said.

DCHA said it can only evict tenants in clear violation of their leases, and even then offers repayment plans, hearings "and other potential solutions prior to the need for an eviction," Sousa said.

RELATED: DC still struggling to keep some residents close to home while they redevelop public housing

The explanation isn't good enough for Karen Settles, who said the protest will persist until all evictions stop.

"I think they should put themselves in our place," Settles said. "You hear is loud and clear now and we are going to fill this lawn up, it will happen."

"DCHA respects the rights of its residents and their supporters to share their opinions and views with the authority. The transformation plan’s central focus is DCHA’s intent to address the properties, containing approximately 2,610 units, which have been determined to be in need of extremely urgent action. Executive Director Garrett and his staff continue to hold regular meetings with residents, advocates, and with the Board of Commissioners to keep them informed of the options that are being deliberated as part of this process.

"Since his arrival to DCHA, Executive Director Garrett has held several of these information sessions with residents that led to a thorough inspection of our entire portfolio. The results of that inspection led to the generation of the transformation plan to address the issues raised at 14 of the authority’s properties. Those residents who were living in unacceptable or dangerous units were relocated to healthy and safe units at that time either in another traditional public housing community or using a voucher.

"Decades of declining federal investment in maintenance and capital dollars have led housing authorities around the country to a similar path. DCHA recognizes that finding solutions for these issues will take cross-sector collaboration and exploration of innovative financing and management concepts. These efforts will take time.  However, no one is being evicted as part of the transformation process. Like many other landlords, DCHA can evict tenants for clear violations of their leases. In addition, DCHA provides extra steps for our residents to enter into repayment plans, conduct a fair hearing, and other potential solutions prior to the need for an eviction.

"As DCHA continues its work on the transformation plan, the authority remains committed to transparency and broad civic engagement. Executive Director Garrett and his team are committed to ensuring that residents live in safe, clean, and affordable housing—a foundation on which to build stable and healthy lives."