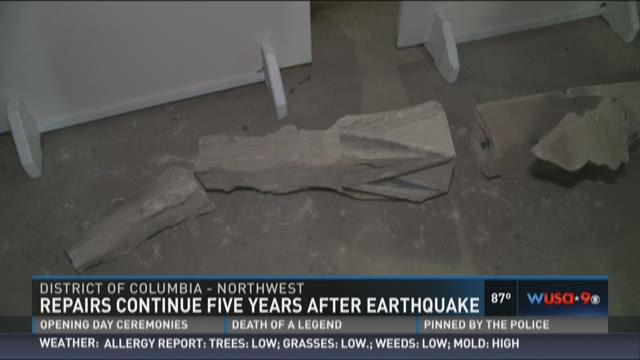 Believe it or not, there are some major landmarks in the Nation's capital that are still recovering from the magnitude 5.8 Earthquake that surprised our region back in 2011.

Including the National Cathedral that experienced extensive damage.

The building is structurally sound but significant work is still needed to ensure the damage doesn't get worse.

It's at once a massive and intricate project.

The great towers reaching out to the sky. The fine details carved into the stone ornaments. The unmistakable marks that give the National Cathedral it's character and beauty, which were damaged in the 2011 earthquake that rocked the region.

Dozens of pieces will be pieced back together before a digital scan is taken. Based on that scan, robots will shape a new pinnacle from limestone..

Other pinnacles and finials that were not damaged in the earthquake are being stabilized and reinforced with stainless steel rods through their centers, before they're finally topped by a finial.

It takes talent, time and money.

The entire repair project is being funded by donations.

The cathedral still has to raise $22 Million to complete the remaining work.

They know it won't be raised overnight.

But, they insist, it's worth it