The election in Pa. still hasn't been called, but dueling rallies are letting voices be heard

Stop the Steal demonstrators gathered on the building's steps Thursday afternoon, while the Count Every Vote rally followed in the evening. 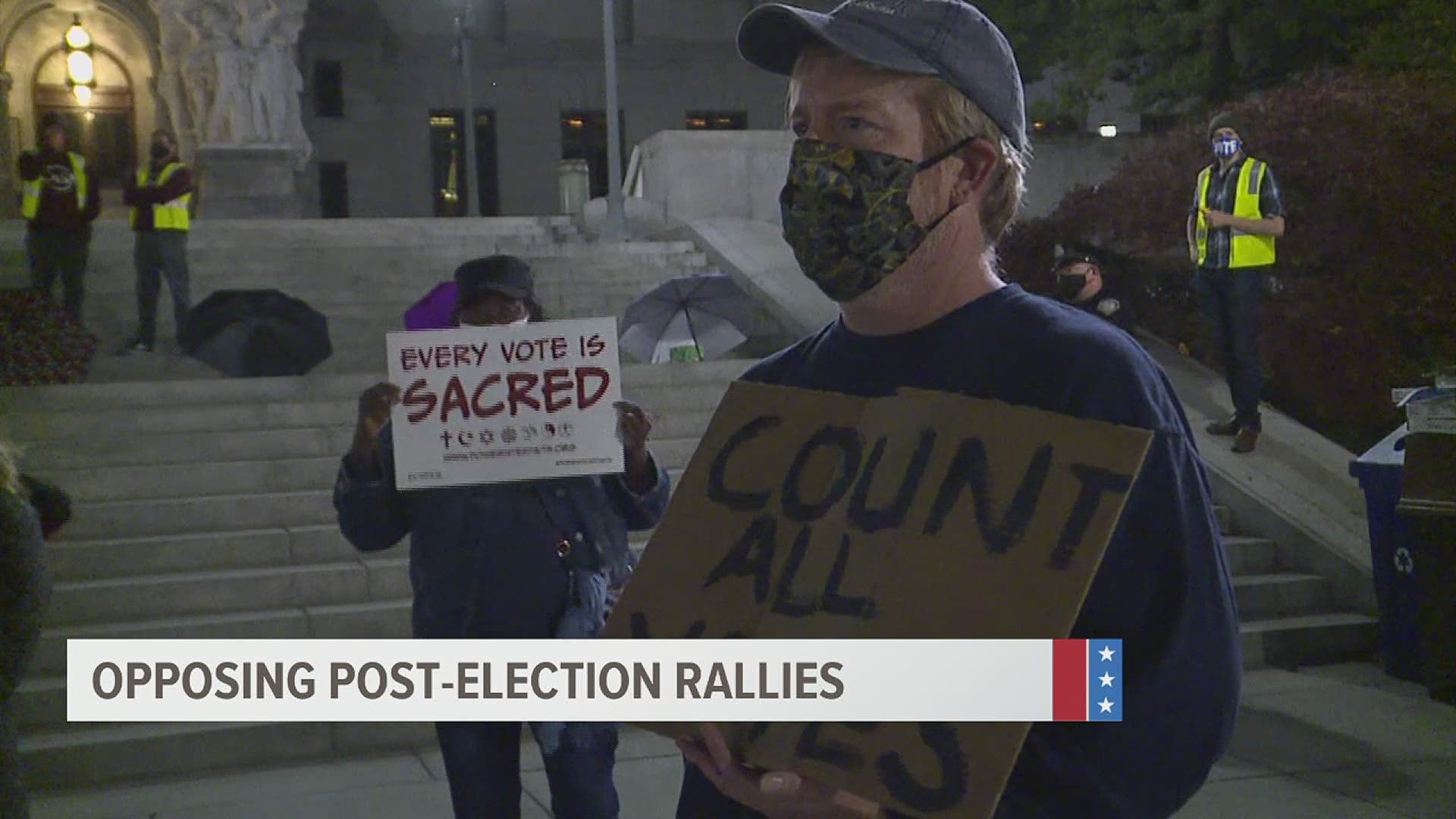 The Stop the Steal rally kicked off at noon, drawing 50 to 100 supporters of President Donald Trump.

The election has still not been called in Pennsylvania, but supporters of Donald Trump are already calling for an "audit" to the vote count.

As the counting of mail-in, provisional, and military ballots continue in the state, attendees chanted "stop the steal" and called for an audit of the results, claiming they wanted to make sure every vote counted was legally cast.

"I love my country and I want this to be a fair election," said Mikaylah Johnson, a Trump supporter from Lockhaven, Clinton County. "And I absolutely believe that Donald J. Trump is the best candidate for everyone. For every American."

However, the Associated Press reported at that time there have been no reports of fraud or any type of ballot concerns out of Pennsylvania.

More than 3.1 million mail-in ballots were filed in Pennsylvania and counties have been warning for weeks those ballots would take time to count.

The Count Every Vote rally followed at 5 p.m. with a crowd of several hundred.

Thursday was the second day of the rally, which had been held on Wednesday as well. Thursday's event, however, was headlined by community organization CASA and local faith leaders.

The rally sought to ensure every vote cast legally was counted, including all legally cast mail-in ballots. Organizers said the event was nonpartisan.

"Voter suppression is a very real issue. As a queer person there are certainly people that I've escorted to the polls who have faced discrimination for their gender identity and things like that that make it more difficult for them to vote," said Harrisburg resident Mister Treats.

Currently in the state mail-in ballots postmarked by November 3 can be counted as long as those ballots arrive by November 6. The US Supreme court upheld that decision but left open the possibility of possibly revisiting the issue in the future. Multiple Pennsylvania counties are separating ballots that arrive from Nov. 4-6 and are not counting them as they wait on the final decision.

The Governor said the state would fight any attempt to undermine the election.

“Pennsylvania is going to count every vote and make sure that everyone has their voice heard. Pennsylvania is going to fight every single attempt to disenfranchise voters and continue to administer a free and fair election. Our election officials at the state and local level should be free to do their jobs without intimidation or attacks. These attempts to subvert the democratic process are disgraceful," said Governor Wolf Wednesday. "In Philadelphia, officials are administering the election with the highest degree of transparency. There has been a livestream of the ballot-counting process available throughout the count, and all parties have canvass observers."

As voters on both sides of the political spectrum began to look beyond the election and toward the future, some said they believed the country could heal.