University of Maryland students shared their experiences dealing with racism in a social media campaign called #FearTheTurtle on Tuesday. 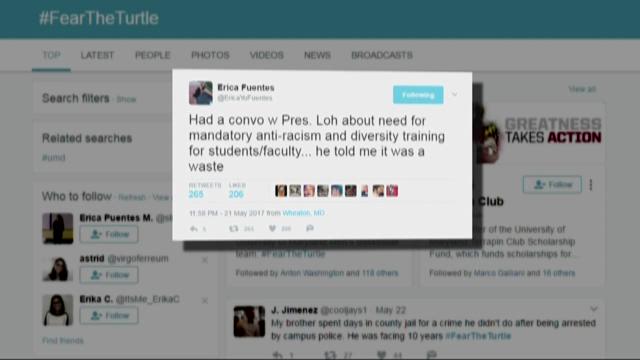 University of Maryland students shared their experiences dealing with racism in a social media campaign called #FearTheTurtle on Tuesday.

University of Maryland junior Clarissa Corey-Bey said she was a victim of overt racism in her first few weeks on campus.

“For the first time in my life, on Frat Row, I was called the N-word,” Corey-Bey recalled.

She posted her experience as a victim or witness of racism at UMD along with hundreds of others.

#feartheturtle joined a white frat and an elder brother goes: "welp I guess we can't use the n word anymore"...smh

#FearTheTurtle this hashtag is so so sad...

The tweets are aimed directly at shaming university President Wallace Loh, who student activists accused of failing to do enough to stop an ugly undercurrent of racism infecting the campus.

Some said the climate is directly linked to the murder on campus of Bowie State senior Richard Collins III, allegedly by a UMD student with ties to a white supremacist Facebook group. 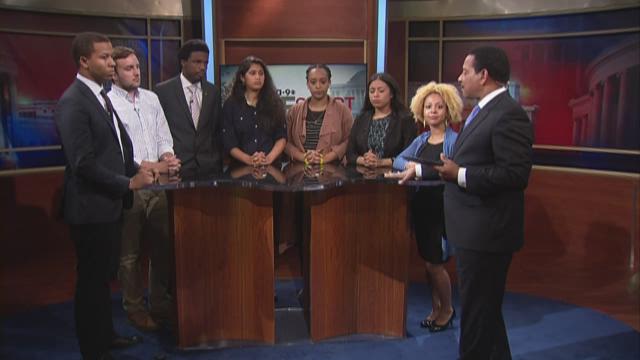 “This could have been prevented,” claimed student activist Erica Fuentes, who graduated this week.

Fuentes tweeted, “Had a convo w Pres. Loh about need for mandatory anti-racism and diversity training for students/faculty … he told me it was a waste.”

“…he immediately shut the idea down saying that racism wasn't something that could be fixed,” said Fuentes on camera Tuesday, “it was shattering,” she added.

She said the tweet came from a meeting she and the Hispanic student action group, PLUMAS, had with President Loh over the winter. She was also part of a second meeting with the group, Protect UMD. We’re told President Loh did not attend the second meeting but other university leaders were there.

Fuentes showed us an email response from the Vice President for Student Affairs. This person wrote, “.. the University does not believe responding point-by-point to your growing set of demands is the most productive path towards a more diverse and inclusive campus.”

The email also mention there were already diversity training plans in the works but fast-forward some three months later to the fatal UMD stabbing.

She also said, “At main commencement, [President Wallace Loh] cried about the situation saying that he's heartbroken…to me and a lot of other students of color on this campus, other organizers, we believe that this could've been prevented."

We did ask a UMD spokesperson about Fuentes and that meeting. They didn’t answer our questions directly. Instead, what they said is, they’re going to roll-out an action plan to fight racism and hate on campus and they’re going to share the details with us. We’ll post it as-soon-as we get it.

The following is the full statement:

“The University of Maryland cares deeply about diversity and inclusion. Throughout the academic year and always, the university meets with students to hear concerns and works to foster an environment where we stand united against hate. In the days ahead, the university will roll out an action plan to accelerate our efforts to combat racism and extinguish hate in all its forms.”

“He did say that in his eyes it wasn’t something the administration had a role in preventing,” Fuentes claimed. She said she and a group of students, who call themselves #ProtectUMD, met with Loh in 2016.

The university has at least five administrative offices dedicated full time to issues related to diversity, inclusion, civil rights, and student conduct, as well as a detailed policy on reporting hate, bias, and race-related incidents.

In 2015, UMD dropped the name of past president William “Curley” Byrd from the stadium on campus. Students said it was a reminder of an era when African American students weren't welcome on campus. Byrd Stadium was renamed Maryland Stadium after intense pressure from student activists on Loh’s watch.

RELATED: Why 'The Noose' is no joke: Maryland's history of lynching

But student critics say the University has not been effective in curing an alleged subculture of hate that the #FearTheTurtle campaign aims to expose.