Trump supporting motorcyclists say they are streaming into Washington to “protect” the public and first responders from anti-Trump protestors. 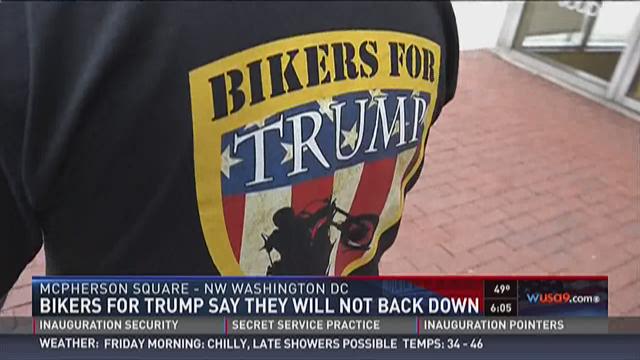 Trump supporting motorcyclists say they are streaming into Washington to “protect” the public and first responders from anti-Trump protestors.

“Bikers for Trump is here to protect the citizens,” said rider Mark Connors, a country singer who rode his Harley Davidson from San Diego, CA.

Connors said Bikers for Trump riders will not seek confrontations but he is “absolutely” prepared for physical conflicts.

“We have made the decision that when those people come, we are going to stand face-to-face with them, eye-to-eye, toe-to-toe, shoulder-to-shoulder with my brothers,” Connors said.

Bikers For Trump has a track record of peaceful protest. The group attracted many members to Trump rallies and the Republican National Convention without significant incidents with protestors.

“We don’t want to intimidate anyone,” organizer Chris Cox told TMZ Thursday. Cox said he expected the group to have a “calming influence”.

Even so, riders have promised to create “a wall of meat”, between protest groups and Inaugural events.

Anti-Trump protestors organizing on social media under the hashtag #DisruptJ20 have announced plans to attempt to block public access to the Inauguration ceremony on the Mall. Anti-Trump groups are making McPherson Square the epicenter of their activities Friday.

“They’re not getting past us,” promised Connors.

Authorities are treating Bikers For Trump like any other protest group. The organization has been granted a permit to stage a rally at John Marshall Plaza on Inauguration Day.