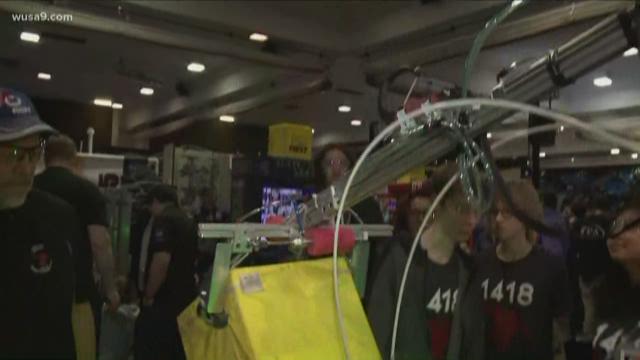 The energy is high, the music is thumping, and the competition is as fierce as any sports event-

except in this case it’s robots going head to head.

Their field is made to look like a giant pin ball machine with cubes instead of balls.

Erin Grace Drake is one of the competitors.

Her team’s Robot name is Mikey, “This Robot’s goal is to pick up a cube and take a cube and put it on the switch or scale,” she said.

The more cubes the team moves, the higher their score. "At the end it has to hang off a little bar," said Drake.

The challenge is released in January.

The teams have six weeks to dream up and build a working robot.

David Boyd is the event announcer and has been involved in the competition for more than a decade.

“These kids are just capable of so much. In six weeks they have to design, build, and program a robot”

Boyd said, adding that this is a sport in which every single participant has the chance to be professional.

He said kids are applying sophisticated engineering and programming knowledge that will change their life. But that’s not all.

“The beauty of the competition is that it’s holistic. It covers more than just robots. These kids learn business skills, interpersonal skills, how to interview, work as a team. It is just phenomenal how this program prepares these kids,” he said.

Programs start for kids as young as 5.

The competition is international, with more than 40 thousand competitors around the world.

Many thanks to Team RoboLoCo, Team #5338, for sharing their GoPro footage.