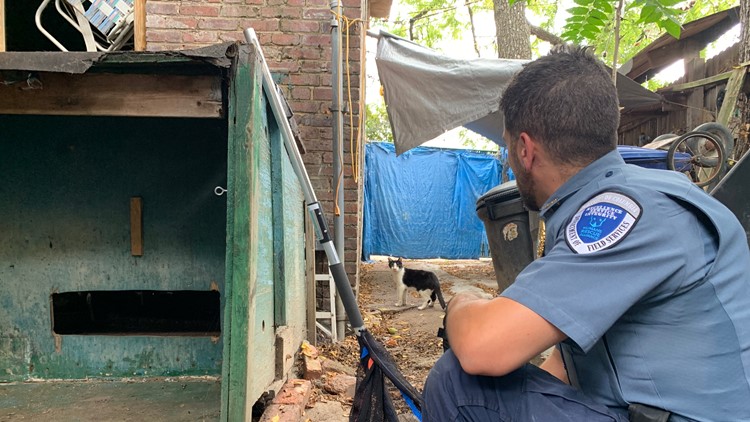 WASHINGTON — Warning, the below image might be graphic to some. Please use discretion.

According to the HRA, they investigated suspected animal cruelty in Northwest, D.C. which led to the arrest of the cats under a search and seizure warrant.

HRA said the cats and kittens were living in unsafe and unsanitary conditions on the premises. They said several of the animals were suffering from untreated medical conditions, "such as severe upper respiratory infections, and in dire need of veterinary attention."

HRA said upon approaching the residence, officers could smell a strong stench of ammonia coming from the inside.

Officers said they saw sick cats roaming the property. The HRA said that once HLE officers were inside, they found a tiny kitten sitting on the floor "whose eyes were so crusted over and nose was so runny that he could barely lift his head."

Officers said they found a tiny kitten sitting on the floor "whose eyes were so crusted over and nose was so runny that he could barely lift his head."
Humane Rescue Alliance

"The condition of this animal was consistent with those found throughout the house," the HRA said.

An update sent by the HRA said the cats and kittens were able to get "the veterinary care and socialization they so desperately needed," following the intake.

The HRA said the case remains under investigation, and the cats are in the care of HRA, where they'll be thoroughly examined by a team of veterinarians and receive the medical treatment they require.

"Today is a new day for these cats," Chris Schindler, Vice President of Field Services at the Humane Rescue Alliance, said."HRA staff will provide them the veterinary care they so desperately need, a clean environment to live in, and the kindness and socialization they deserve."

RELATED: 'We thought he was dead' | Shepherd the miracle puppy is recovering, but who dumped him?