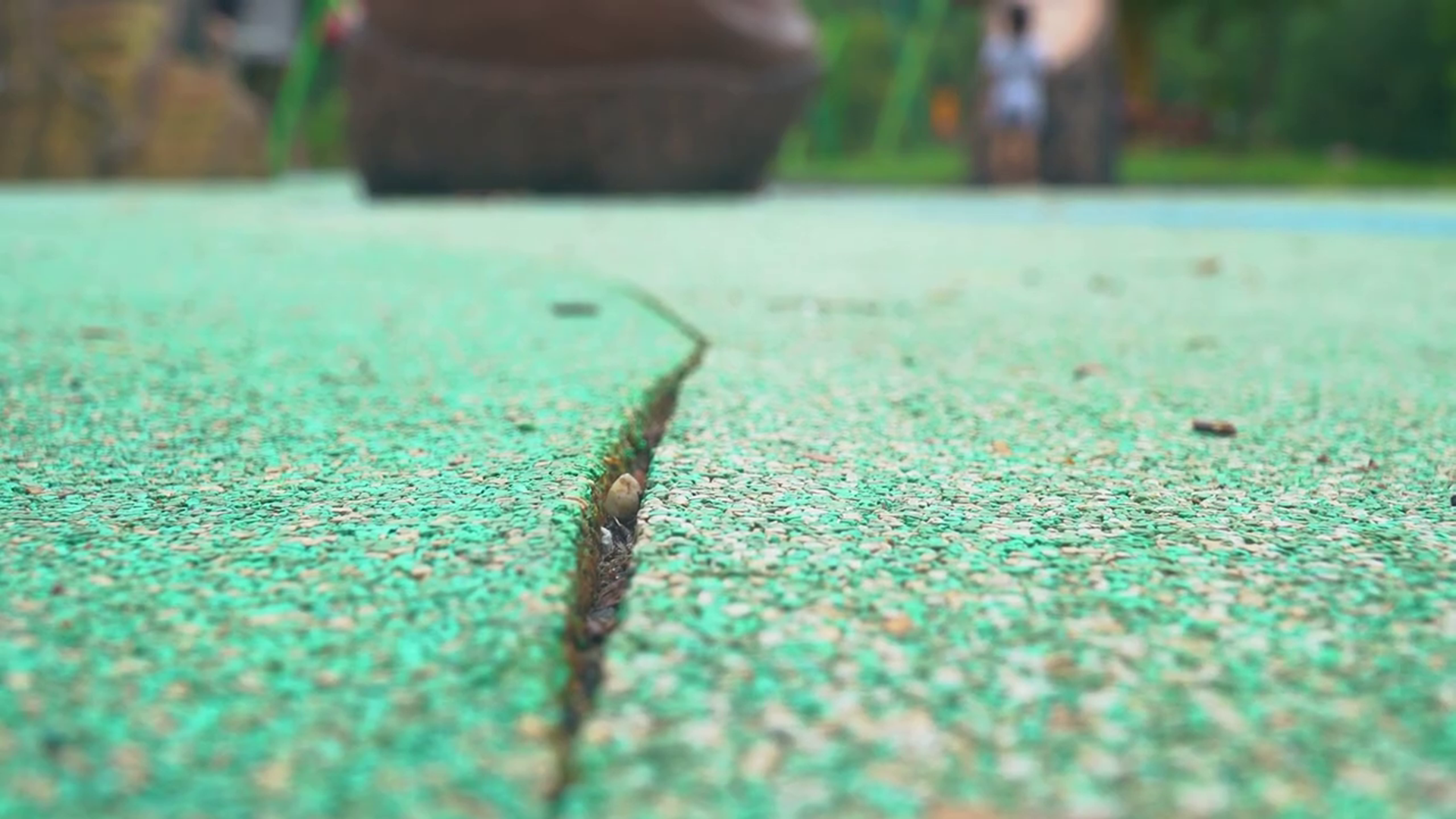 The lead – which can cause permanent damage to children's developing brains – is in the crumb rubber ground mats that kids run on and touch, according to testing by The Ecology Center, a Michigan-based laboratory.

"It’s a shame they don’t study what they’re going to put first in the ground so the kids can be safe," said father Romario Amaya.

"We're concerned about any exposures that may be happening, particularly for children because they're in developmental stages where lead exposure is particularly impactful It impacts learning behavior," said Jeff Gearheart, director of testing at The Ecology Center.

Crumb rubber mats are made of recycled tires.

DC's Department of General Services blamed any lead contamination on lead paint from old school buildings washing into the crumb rubber from rainwater. They used pictures to back up their argument.

Credit: DC DGS
DC DGS report illustrates a theory of how lead comes from building paint flakes into the playgrounds

But back in Prince George’s County, we noticed what made lead detection at Woodland Wonderland Playground in Capitol Heights different was the fact that it’s on a hill and there are no old buildings nearby – so no rainwater could wash lead paint into this crumb rubber.

Finding lead on a playground’s recycled tire flooring can be hit or miss.

According to the Ecology Center, and WUSA9's series of tests this past two years, one can dig out crumb rubber from one spot and find lead, and then not find lead in rubber right next to it.

"For five individual shreds of rubber that are adhered together, we had five different readings on those individual shreds including a number of shreds that were in the thousands of parts per million in terms of the lead," added Gearhart.

Because of our tests, Prince George’s County Parks closed both parks, and hired a contractor to test lead levels.

Those tests found lead levels below the EPA guidelines, in contradiction to the Ecology Center’s tests so both parks are now re-opened after fixing worn and damaged spots where larger rubber chunks were exposed.

"We want them to feel confident in us that they can come and have a safe place and a secure environment to come. Have fun," said Prince George's County Department of Parks and Recreation spokesperson Kira Calm Lewis.

The agency pledges to test more than 40 additional county playgrounds this year.

"Eventually chunks of that will come out it will come loose. So to think of our kids playing on a surface like that with potential exposure to lead is very troubling," commented Maryland Delegate Mary Lehman (D-Prince George's County)

Lehman says she finds it wrong that, while disposing old tires faces strict regulations and prohibitions in landfills, using recycled tires in playgrounds has little-to-no regulation.

"There are no regulations saying you know what, what you do with those and that that's what I have been trying to tackle with my artificial turf legislation. And I will be bringing that bill back in the 2021 session."

So what’s the alternative? Marissa Bauer of  Minnesota-based SafetyFirst Playground Maintenance installs both crumb rubber playgrounds and another type of surface called Engineered Wood Fiber. It looks like mulch, but only uses the best parts of the tree trunk to make it unlike what was used in playgrounds nationwide several years before.

"Six months later it was molding and rotting and people were very unhappy and that's understandable. But if you really do your research and you select the proper wood fiber that's only live stem wood, doesn't have any bark or other organic materials that's going to degrade. You can end up with a really great long lasting surface."

Bauer weighed the advantages of wood fiber and recycled tires for playgrounds. Rubber can look better with bright colors, can have good shock absorption if the rubber stays in place. Wood fiber is all natural, and is also much less expensive:

"We see that poured in place costs five or four to five times more than a virgin wood fiber playground," added Bauer.

Installers of recycled tire playgrounds say their product is safe and that any lead contamination of playgrounds is not because of something toxic with the crumb rubber itself.

But parents must now face a choice: if lead has been found in crumb rubber of dozens of playgrounds in the DC metro area do they still let their children play on these surfaces?