Living life with a disability

If you take Metro, this next story may be a real eye-opener. The No Barriers team spent a recent morning riding the train with a D.C. woman who relies on a wheelchair or scooter to get around town. 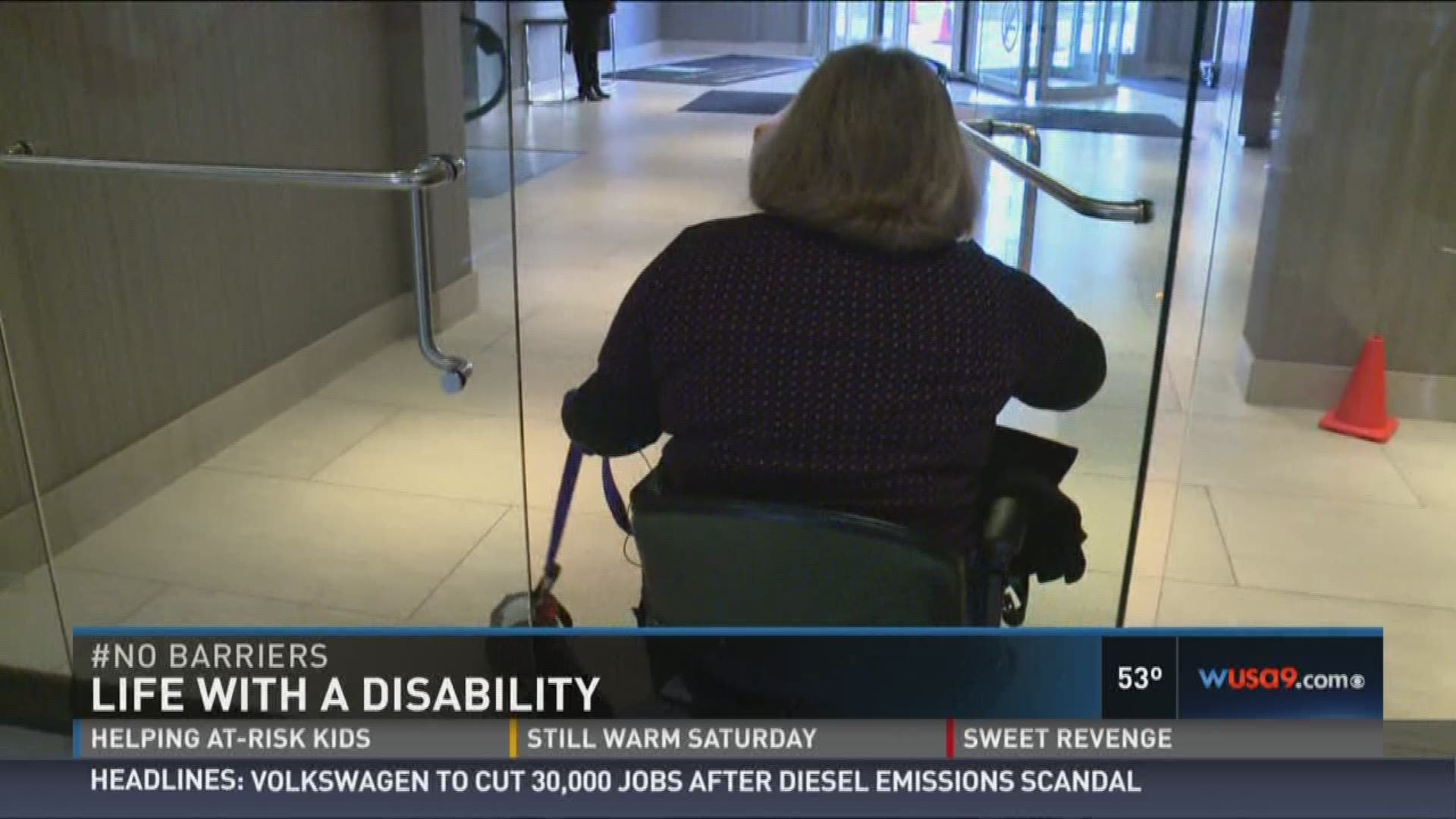 If you take Metro, this next story may be a real eye-opener. The No Barriers team spent a recent morning riding the train with a D.C. woman who relies on a wheelchair or scooter to get around town.

The team followed Melissa Ortiz for just a few hours as she went about her typical day, that turned out to be filled with obstacles.

“Excuse me!” she said, trying to get someone’s attention at Starbucks.

Ortiz said using a wheelchair or scooter can make her feel invisible.

“I can’t tell you how many times I’ve had to yell to get somebody’s attention,” she said.

Counters are often designed for the able-bodied.

“They’re supposed to be a certain height and when they’re not, it’s almost like you’re not even there.”

“This is the entrance to the Metro,” she said. “There are no elevators here to get me downstairs.”

Ortiz traveled through an urban shopping mall in a search for an elevator and found one nearby. A man with a stroller gets off. The door quickly closes behind him, shutting out Ortiz and Annie.

“Can somebody hit the button real quick?” she asked. “It would have been really nice if he had held the door for me.”

After that missed ride, the elevator ironically stops working.

“I’m stuck here because neither of these buttons are working,” Ortiz said. “There’s no way out of this building except that.”

RELATED: What is No Barriers?

She found security, who directed her to a nearby retail store, where there’s an elevator inside.

“If somebody could hit one, that would be great,” she said.

Moments later, Ortiz was confronted with another obstacle.

“Excuse me!” she said again.

Ortiz tried to get the attention of the woman with the vacuum, as cord lays in her path. The woman running the vacuum cleaner could not hear her.

“She needed to be watching the cord,” Ortiz said.

Ortiz ultimately shoved her way outside — through two heavy doors

“This is irritating,” she said. “It’s frustrating.”

Unlike other shoppers, wheelchair users must endure the elements and travel around the block to get to Metro.

Ortiz asserted herself again to get on the elevator, ahead of parents with a stroller. The next stop was a Metro fare card machine. But the only accessible one happened to be out of service.

She used another machine, but it was a struggle.

She rolled up to the station manager’s booth to report it but no one was there. Finally, she boarded a train. It takes off before she can back in her scooter and get situated.

“Ooh,” she said, as the car is rolling for a bumpy ride.

Getting off the train can be an obstacle too.

“Sometimes, the way the different cars are made, there's a gap between the platform and the car,” she said.

More than once, she’s gotten a wheel stuck in that gap, relying on strangers to come to her rescue. All of this happens in just the first hour of her day.

If you’ve missed any of our #NoBarriers reports this week, or would like to report the obstacles you face, click here.