Vertical lifts are designed to carry wheelchair users when an elevator isn't an option. But have you ever thought what might happen if they're out of service? 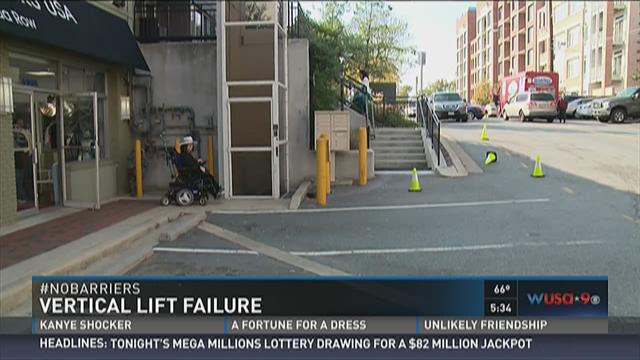 Vertical lifts are designed to carry wheelchair users when an elevator isn’t an option. But have you ever thought what might happen if they’re out of service?

Some of the vertical lifts are outdoors and out in the elements, and as one local woman discovered, they can be unreliable and even dangerous.

“I hate it every time,” Beryl Neurman said.

Neurman has good reason to fear this towering vertical lift.

“When I landed, it was like a jolt,” she said. “It kept going faster and faster.”

In May, it dropped Neurman and her wheelchair 10 feet to the ground.

Vertical lifts are the only way wheelchair users can avoid stairs and access some businesses.

“My fall from one of these things really has scared me every time I have to get in one, but I can’t avoid them,” she said.

RELATED: Uber refuses to take a blind passenger in D.C.

Neurman was not seriously injured and the lift was shut down for repairs but those took 10 weeks.

“Every time it makes a noise or shakes, that’s when the residual terror comes back,” she said. “Like what’s going to happen this time?”

Months earlier, she was trapped inside the lift when it inexplicably stopped working.

Emergency responders carefully had to extract Neurman and her 375-pound wheelchair.

“I’m lucky today because there’s no one in the parking spot right next to the lift,” she said.

If a car parks next to the lift, Neurman is stuck until it drives away.

Publicly owned lifts are inspected every year by the state. Those that are privately owned are supposed to be checked out on an annual basis as well.