WUSA9 first brought you the story of Chai Suthammanont in July and now it's prompting legal change. 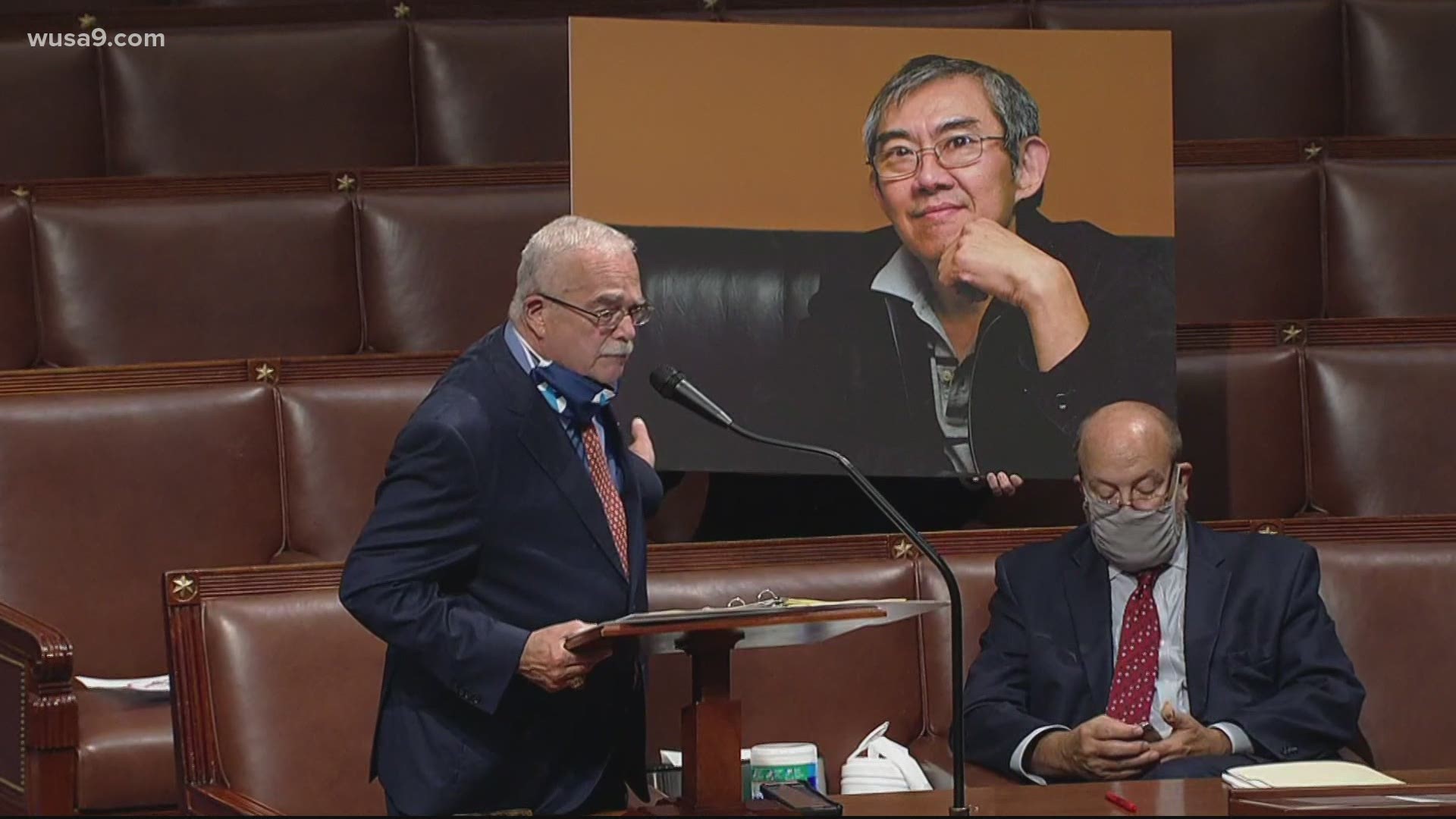 WASHINGTON — The full House of Representatives passed a bill based on the case of a Quantico worker, who died after catching COVID-19. The legislation is supposed to protect federal workers as they return to the workplace during a pandemic. WUSA9 first brought you this story in July and now it's prompting legal change.

A picture of Christina Suthammanont's husband Chai was shown on the floor of the House of Representatives Wednesday. It represents the lives she believes could be saved with the passage of the Chai Suthammanont Remembrance Act.

“I think of him being kind of a little bit embarrassed that he's there in the center of the floor, but honored to have brought this amount of protection to people,” Christina said in reaction to the vote.

#BREAKING: The House passed a bill based on the case of a @MCB_Quantico worker, who died after catching #COVID19. It's supposed to protect federal workers as they return to the workplace during a pandemic. @wusa9 first brought you this story in July. Now, it's prompting change pic.twitter.com/QIS43dYGo3

Chai worked in the kitchen of one of the Child Development Centers on Quantico Marine Corps Base. He died after catching COVID-19. A spokesperson for Quantico told WUSA9 she could talk about the case because of a "pending investigation."

RELATED: ‘It was entirely preventable’ | Widow of Quantico worker who died of COVID-19 complications pushes for workforce protections

Christina said the conditions at work, before her husband died, led her to believe changes were needed.

So lawmakers, led by Rep. Gerry Connolly (D- VA), passed the bill in Chai's memory, and for any federal worker in the future.

Here is the press release from @GerryConnolly's office. Our thanks to them for citing our @wusa9 reporting. pic.twitter.com/9q1hvra3Ya

“Let me be clear – this was an avoidable death,” Connolly said on the House floor.

H.R. 7340 requires every federal agency to develop a detailed plan on how the full workforce can return. It needs to include guidance about what personal protection the agencies will provide, cleaning protocols and plans for employees who are high-risk.

“I named the bill after Chai, because although the provisions in this bill can no longer help him, they can help the millions of federal and contract workers who will reenter the federal workspaces across the United States,” Connolly added. “The legislation is designed to save lives and protect those who serve the American people.”

The vote has Christina thinking about Chai's birthday on Oct.9. It is the first one he and Christina won't celebrate together in almost thirty years.

“In the years to come, knowing that this bill passed around this time of year, around his birthday, there will be something very thankful," she said. "I can be thankful for that."

On Wednesday, Virginia Sen. Mark Warner introduced the Senate version of Chai’s bill. There is no exact timeline for a full vote in that chamber just yet.

RELATED: ‘They can’t possibly think that this will work’ | Teachers, staff at DOD schools worry about starting year in person