Hyperbaric oxygen therapy has been used to treat carbon monoxide poisoning and to heal wounds, but now doctors tell WUSA9 it shows promise with coronavirus patients. 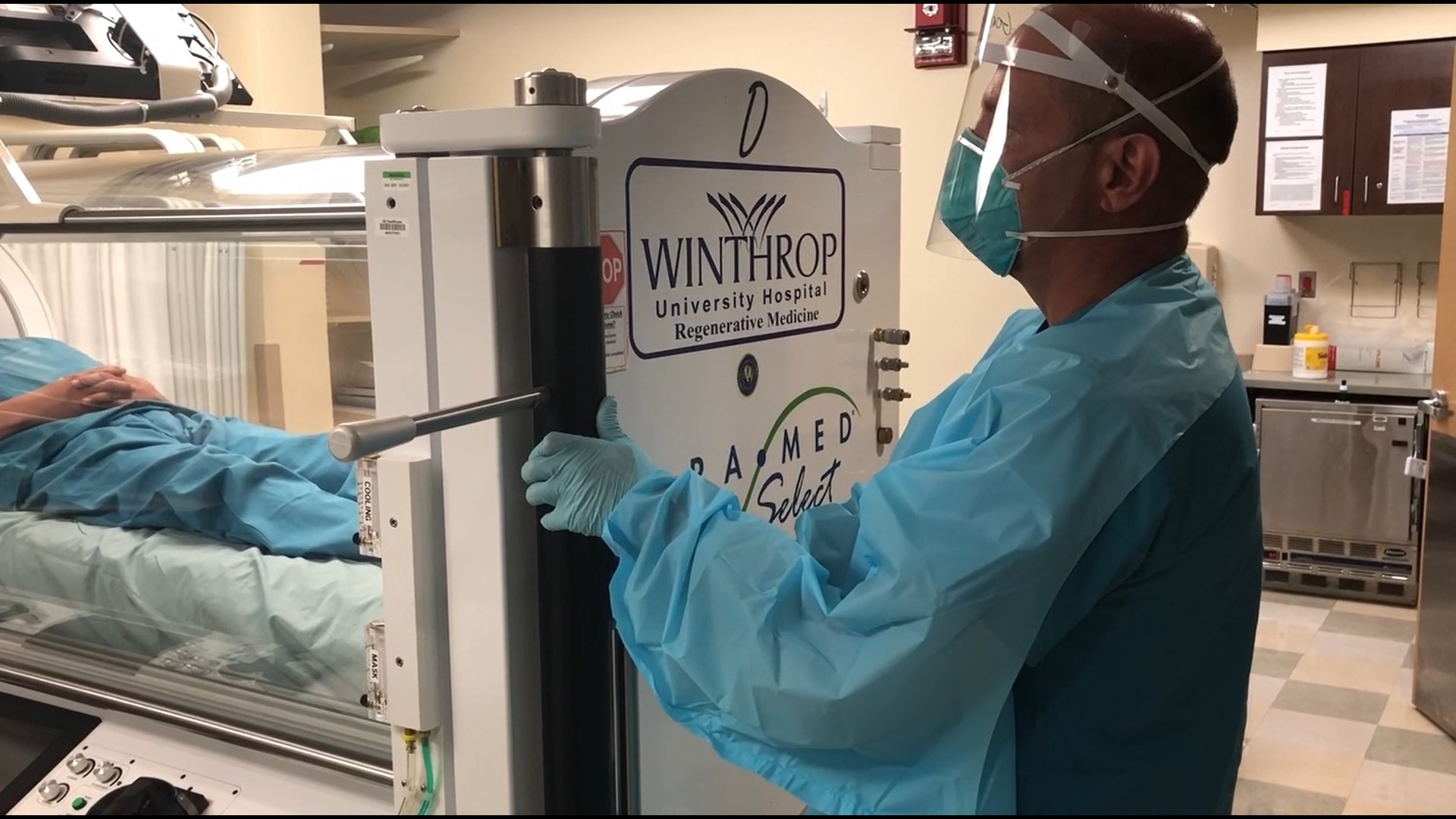 NEW YORK — As their hospital wards filled up with COVID-19 patients, two New York doctors were desperate for ways to treat the novel virus – so desperate, in fact, they turned to a treatment used for decompression sickness in deep sea divers.

Even worse, he said, none of the treatments were really effective.

“What I started seeing in the emergency department scared the bejesus out of me, too,” he said.

But now, he and Dr. David Lee of NYU School of Medicine, have hope.

WUSA9 got an inside look at a small clinical trial completed while New York was a major COVID-19 hotspot. Doctors examined whether or not hyperbaric oxygen therapy could help people suffering from coronavirus. Ninety-percent of the patients in this study recovered and were able to go home to their families.

The biggest problems with the novel coronavirus are the respiratory issues and subsequent low blood-oxygen levels it can cause. For more than 80 years, hyperbaric oxygen therapy has been used to treat similar issues in scuba divers who develop decompression sickness.

The treatment works by placing the patient into pressure chamber filled with 100% oxygen. The pressure forces the oxygen into the body, and also increases the blood's capacity to store and transport oxygen to tissues.

In the NYU clinical trial, doctors treated 20 coronavirus-positive patients with hyperbaric oxygen. While two of them died, the remaining 18 patients recovered and were discharged from the hospital – a 90% recovery rate.

Doctors compared this group to similar patients who didn't receive the treatments. They said they found hyperbaric oxygen decreases the number of deaths and the number of patients that required ventilators.

We asked the hospitals and health care facilities in the DMV, which have hyperbaric oxygen chambers, if they're using them to treat COVID-19 patients. Right now, no one in our area is -- that's because this small study marks the very early stages of this possible medical breakthrough.

“I guess I feel hopeful that maybe we're on the right track,” Dr. Lee, who is an assistant professor of Emergency Medicine Research at NYU, said. “We don't want to come out and say that this shows that hyperbaric oxygen is definitely effective. We think the next step is to do a larger randomized study of this, now that we've demonstrated that hyperbaric oxygen seems to be safe in therapy among COVID patients.”

Everyone, including the medical staff, wears full PPE for the treatments. During the trial, the chambers were only used for COVID cases, so there was no worry about exposing other patients.

There are some minor risks. Some people don't tolerate the increased pressure well, but doctors can make adjustments to deal with that concern. The researchers also said they've had ongoing discussions about whether the chamber ventilation could send COVID-19 particles out into the world.

“The risk of the exhaled COVID virus being transmitted to another person through the chamber exhaust, based on where these exhausts are typically located in the hospital and proximity to other people, was considered to be very, very low,” Gorenstein said.

So, if you're sitting at home wondering what the takeaway is here, the doctors have a message for you.

“I think I want to tell everybody that you're not alone in this,” Lee said.

“Don't give up hope,” Gorenstein added. “This is a new disease. We're only in the beginning phases of understanding it. In a really, really short time, we've made tremendous strides.”

There's still a warning from the doctor: this progress does not mean you should let your guard down. They believe the public still needs to wear masks and social distance so medical staff have more time to figure this out.

The team is looking for other hospital systems to participate in the larger study. Gorenstein said there are some in our area that have this capability, but they haven't reached out to them just yet.

RELATED: Meet the US Army General tasked with finding a COVID-19 vaccine