One year later: Here's how Breonna Taylor was remembered a year after she was killed by police in Louisville

Protesters said they will never stop fighting, calling for justice for Breonna Taylor. 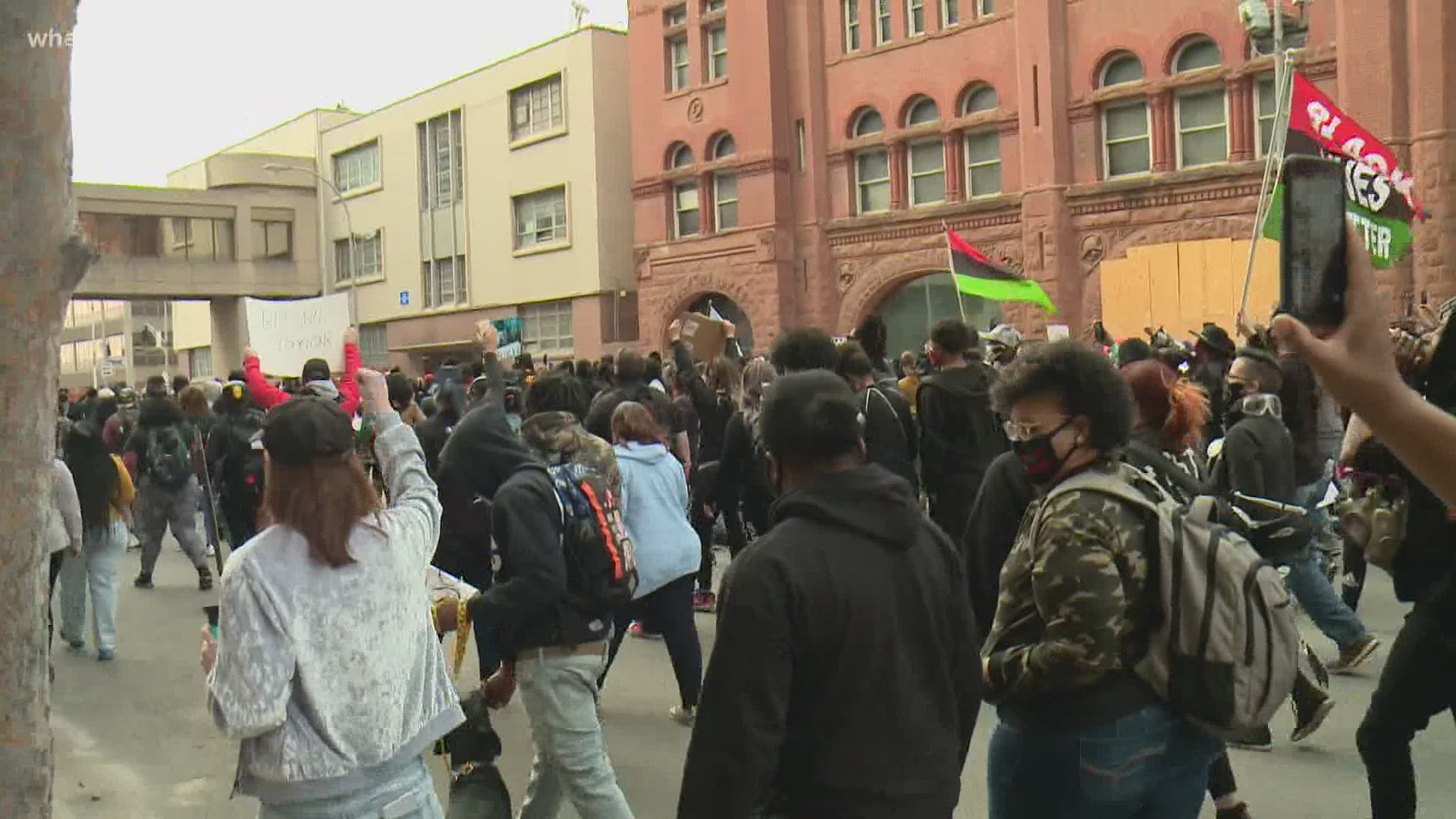 Saturday marked the anniversary of Breonna Taylor’s death, a year after she died at the hands of police.

It’s a day that has forever changed the city of Louisville and it’s also one that Breonna Taylor’s boyfriend Kenneth Walker will never forget.

Walker said he woke up on this day thinking of justice and what it may look like in his eyes.

“I really don't even know at this point – they dropped my charges, but I feel like that's just the beginning and definitely doesn't end there, he said.”

The park was the stage for many performances and speeches. Hundreds returned downtown showing their commitment has never left. It was also the largest gathering in the city since last September.

Palmer marched front and center through downtown while holding a banner of her daughter's face while celebrities, local activists and co-founders of Until Freedom followed her lead, voicing their calls for change.

“We are out here fighting to make sure that it does not happen to you tonight," Mallory said.

Until the officers involved in Breonna's death are charged and convicted, protesters say they will continue action.

"This war is from over today is the beginning of the second battle for justice for Breonna Taylor," Dr. Umar Johnson said.

"You've seen us stand, you've seen us gather, march, protest, cry," Palmer said. "It's crazy how long it's been...what you won't see is us divide on what we want."

Here are some moments from Saturday's rally:

"One year ago today, Breonna Taylor’s life ended tragically, and far too soon. And for that, I am deeply, deeply sorry.

I appreciate the many people coming together peacefully this weekend in remembrance, especially Breonna’s family, who have lost so much. I also appreciate our Louisville Metro team, including police officers, our Office for Safe and Healthy Neighborhoods’ community engagement team, Public Works and others, who spoke with demonstrators, and worked to ensure everyone could exercise their First Amendment rights lawfully, peacefully, and safely.

Breonna’s death devastated her family, friends and coworkers, and it has deeply shaken our community and our country. Her death, along with those of George Floyd, Ahmaud Arbery and too many others, serve as painful reminders for Black Americans of the injustice, discrimination and violence they’ve faced for centuries – and too often still face today.

For White America, these deaths were the latest reckoning and a just alarm that things must change – that America, united, must listen, understand and act to end the injustice that’s hurt and held our country back for far too long. Racism is real, and we must move to dismantle the systems that continue to deny access and opportunity for all of our citizens. We must produce, support and invest in solutions, like public safety reform, increasing access to health care, housing, education and job opportunities. We have to do more to end poverty and to boost Black wealth and support Black entrepreneurs and businesses and all those who suffer from lack of resources.

I am encouraged by the significant reforms we’ve made so far in Louisville, but we have much more to do. And I remain committed to that being my focus for the rest of my term as your mayor.

Of course, no act of government can heal the broken heart of mother who has lost her daughter. That pain is permanent, as is the scar that Breonna’s death has left on Louisville and America. As a community, we will continue to use this pain to fuel our work so this type of tragedy never happens again, and to ensure we emerge from this experience as a stronger city, more unified, more equitable and more just than ever before.

March 13 will always be a day of remembrance in our city. The people of Louisville will never forget her name – Breonna Taylor – and the cause that she represents."

RELATED: Timeline: Here are the changes and reforms we've seen in Louisville since Breonna Taylor's death

PHOTOS | Remembering Breonna Taylor year after she was killed by police

Breonna Taylor's mother Palmer will join families of homicide victims to distribute food to the community Sunday. To learn more about the events, click here.

Protesters said this weekend will be the beginning of what's to come, saying they will never stop fighting for justice.

Downtown streets will be closed to create a walking plaza for those planning to gather at Jefferson Square Park. For a full list of closures, click here.

RELATED: 'She still has not gotten justice' | Organizers plan protests to mark one year since police shooting of Breonna Taylor