DC law lists "Source of Income" with other protected classes such as race, gender identity and disability. This means landlords can never advertise or say they don't accept vouchers. 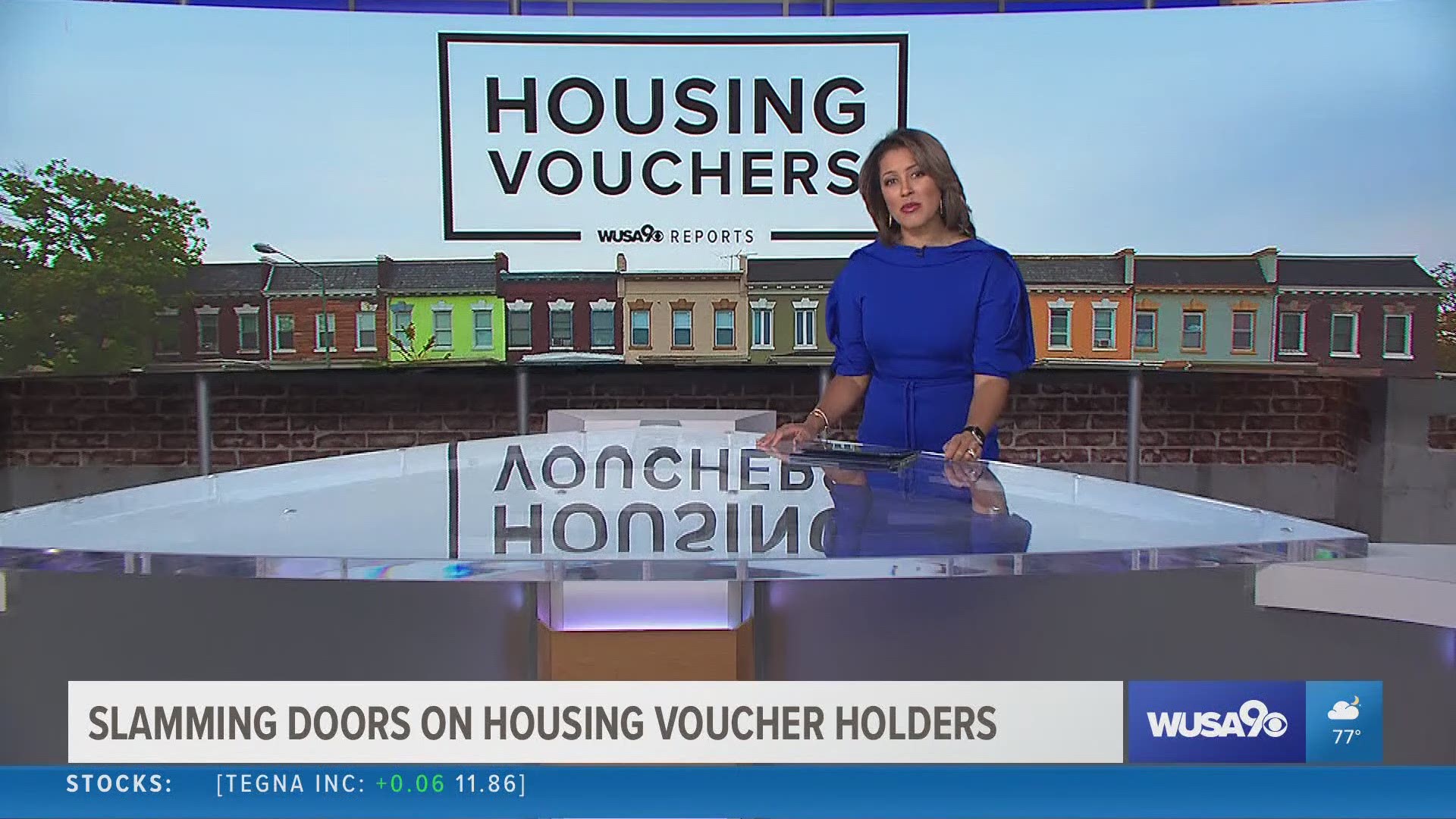 Here in DC, the Housing Authority (DCHA) says more than 10,000 families take advantage of that program. Rents vary throughout the city. In neighborhoods like Georgetown, a housing voucher recipient can rent a one-bedroom apartment for about $2,600, according to DCHA.

But, too often advocates say doors that should be open are slammed shut.

One woman agreed to speak with WUSA9 if we withheld her name, changed her voice and image, citing safety concerns.

She said after she left a bad marriage, she tumbled through a year-long search for a place to live using a housing voucher issued by DCHA.

“I was essentially in hiding,” she said. “It was a long haul to get it, so it was like ‘Okay, the hard part is over,’” she said.

The hard part lasted several months. She spent hours every day looking for a home, but landlords throughout the District told her to look elsewhere. In their polite replies, she heard cruel assumptions.

“It made me feel like I was not worthy enough to have a place to live.”

The list of excuses from landlords was long. One landlord told her the required certification and inspection process was too onerous. Others asked her to prove an income so high she wouldn't need a voucher.

“I was frightened, I was ashamed, and I was trying to figure out what I was doing wrong,” she said.

The answer was nothing. DC law lists “Source of Income” with other protected classes such as race, gender identity and disability. That means landlords can never advertise nor say they don’t accept vouchers.

Kate Scott oversees the fair housing unit at a non-profit called the Equal Rights Center. We read her one of the emails sent to the woman at the center of our story. It read, "You would just need to make three times the amount of $7,300 a month to qualify.”

“It is very frustrating partially because the laws have been on the books for a long time,”’ Scott said. “We would say that is a source of income discrimination."

Scott went on to explain that the voucher holder should have only been asked to prove she could pay for whatever her voucher wouldn't cover, rather than the entire rent.

“So we say this is like playing a game of whack-a-mole and these are tactics that some housing providers have come up with in order to not comply with anti- discrimination laws,” Scott said.

Sometimes discrimination is obvious. WUSA9 looked through more than 100 Craigslist ads and found advertisements with plainly illegal language such as “No housing vouchers,” “Vouchers not accepted,” and “Owners will not be accepting Section 8 Vouchers.”

Other times, discrimination is disguised as a helpful hint. WUSA9 found ads with confusing wording such as “This house is not approved for the DC voucher program,” and “No vouchers-section 8 doesn't cover full rent asking price.”

We reached out to the contacts behind these posts. Three people called us back and indicated they were unaware of the law. Two people offered to change their ads.

Another said he didn't know it was illegal and apologized.

Further complicating the laws are two exemptions for small landlords and the hypothetical “Mrs. Murphy.” DC law allows landlords with three or fewer properties and landlords who reside in the home to deny vouchers, but they still cannot advertise, write or say they won’t take them. In other words, the landlords can mentally discriminate but risk penalties if they tell the prospective renter why they said no.

The head of DC's Office of Human Rights (OHR), Monica Palacio, said many landlords don’t fully grasp the District’s anti-discrimination laws and risk penalties on a case-by-case basis. Landlords may have to pay tens of thousands of dollars in damages to prospective renters. Yet, problem landlords are virtually impossible to follow because the complaints are sealed by law. OHR doesn't internally track repeat offenders, either.

When a voucher holder does come forward, resolutions can take up to a year.

“It’s a lot to take on when you file a complaint,” Palacio said. “It’s probably one of the worst things that has happened in someone’s life and now they have to come spend 12 months talking about it. Not everyone will choose to do that.”

The woman WUSA9 interviewed fought back, though the company and any settlement are private.

Now she’s finally ready to start rebuilding her life in her new home.

“It gave me a safe place,” she said. “It’s getting a part of yourself back that you didn't know was lost.”