It was fifth period -- a beautiful Spring day in Littleton, Colorado. and Salli Garrigan was just getting to choir class. As a theater-obsessed teenager, this was her "safe space." That's when the shooting began. 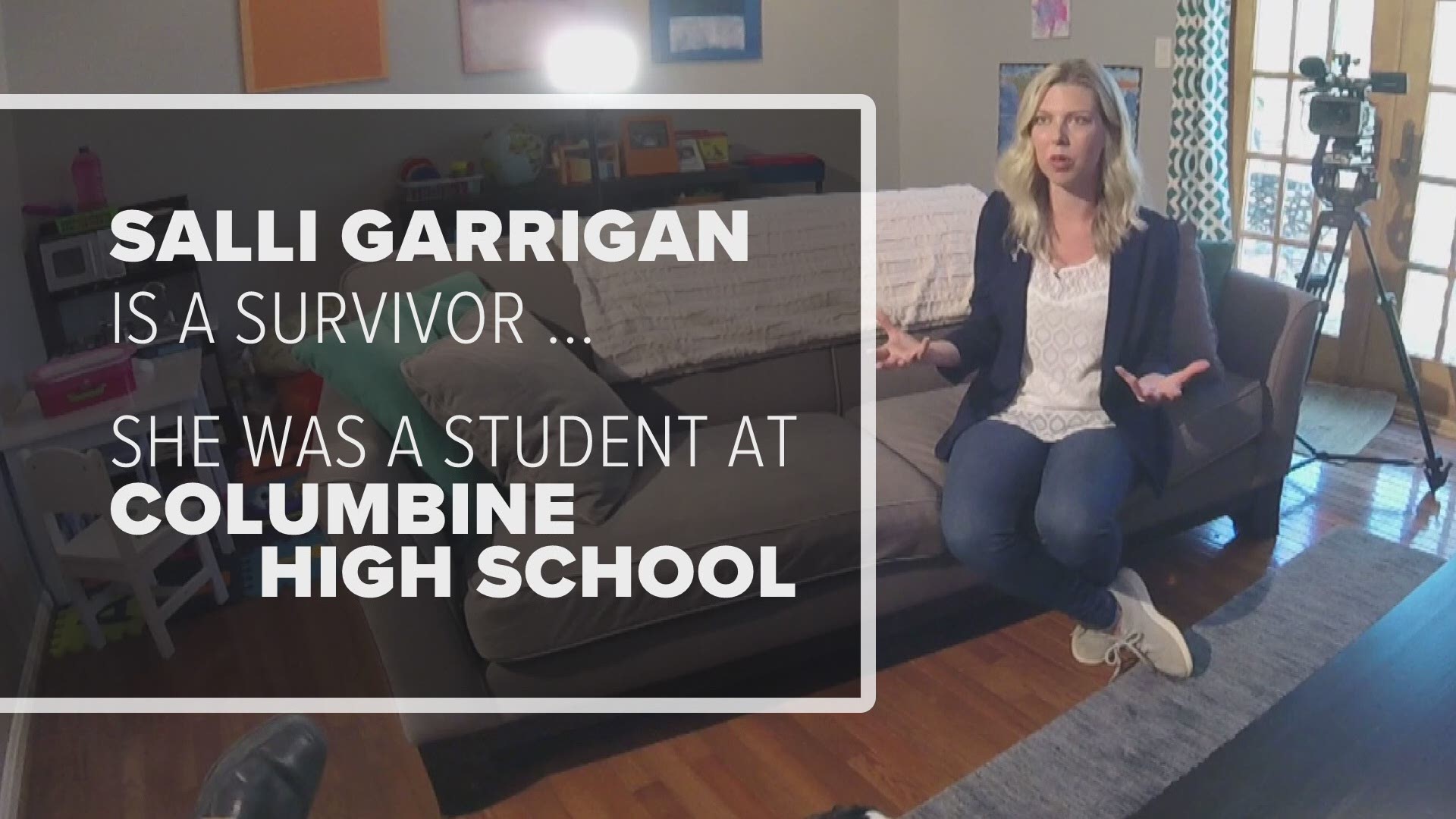 WASHINGTON, D.C., USA — It was fifth period; A beautiful Spring day in Littleton, Colorado. And Salli Garrigan was just getting to choir class. As a theater-obsessed teenager, this was her "safe space."

That's when the shooting began.

"We could hear from the lower part of the auditorium (gun noises)," she said. "So we dropped in between the seats."

They tried to run, but were told by a teacher to stay back. There was a lot of confusion. Soon the fire alarm went off.

"The sound of ricocheting bullets," she said. "And screams were suddenly muffled by the fire alarm."

It was a lot to handle for a 16-year-old. Even after she escaped the school, she remained in disbelief.

"I thought that there's no way it could actually be somebody with a real gun," she reflected. "Because it was Littlton, Colorado. It just couldn't happen in our community. I thought."

In the hours that followed, she learned what happened. Two classmates had entered the school with guns, and killed 12 students and a teacher. The shooting sparked a national debate on gun control, school safety, and mental illness. This Saturday marks 20 years since that horrific day.

In the two decades since the shooting, Garrigan has told this story hundreds of times. At first she kept it short. She didn't want to let that day define her. And she felt it wasn't her story to tell.

Credit: Evan Koslof
Salli Garrigan sat down with WUSA9 to discuss her journey over the last 20 years

She would compare herself to their stories, and think 'it just didn't compare.'

"For a long time," she said. "I was embarassed to tell my story."

In the year of 2000, she returned to school as a senior. She said being around so many other students with the shared experience helped with the coping. It was only after she graduated, that she started to feel the effects of what happened.

"I would have these moments of panic," she said. "That I needed to find not just one exit in a room, but two exits. And I couldn't trust people. So having relationships was harder because I would almost push them away. So it was things that were happening to me personally that I didn't think were actually the aftershocks of Columbine. I just thought maybe I was a little crazy."

But soon it became apparent that it wasn't just her. She'd hear stories of classmates dealing with depression, broken marriages, or addiction.

"It was definitely during a time when we didn't want to say we were struggling," she said. "Mental illness was a weird stigma. So to say we were hurting or to say we needed help was almost unheard of."

That's why Salli found solace in theater. It was a place to escape. But for decades she shyed away from sharing her story.

For a long time, Salli resisted becoming an advocate, and she would rarely talk about her horrific experience. Then two things happened.

The first turning point was when Salli started a family. She got married, and had two kids, Dottie and Hugh, aged four and 9-months. Her husband, Patrick pushed Salli to be more open about her experience.

"He showed that my story matters," she said. "I matter. To not compare to anybody else's story."

But her advocacy really started to pick up just last year, in the aftermath of the shooting at a high school in Parkland, Florida.

"It made me sad," she said. "That 19 years after Columbine something so familiar was still happening."

But Salli said it wasn't the shooting itself that pushed her to action, but the students.

"They right away said they were survivors," she said. "They had almost the same situation as what happened with me. And they were calling themselves survivors and fighting back. And using their stories for change."

That's why her message to these students may surprise some. It's a message of regret.

That's not the case any longer. Salli now volunteers for "Moms Demand Action," a group that fights gun violence. Through her work, she hopes to amplify the voices of survivors and those lost.

"We've got to honor (them) through action," she said. "Use their voices. Tell their stories. Let people know about these people we lost. Say their names outloud. Because they are not forgotten."