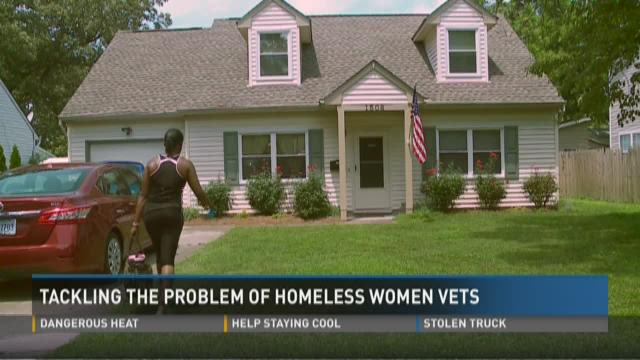 VIRGINIA BEACH, Va. (WVEC) -- Getting vets off the streets. One Virginia Beach charity has been working to do that for more than two decades.

The issue of homelessness among women's veterans doesn't get a lot of attention, but the numbers suggest that it should. In fact, those numbers doubled between 2006 and 2010. And now, according to HUD, there are more than 4,400 women vets out on the streets of America on any given night. In fact, they're four times as likely to become homeless as their civilian counterparts.

But those are just statistics.

Today, Yasmine Charles' real life story played out. She was an E-5 in the Navy, a culinary specialist, and a cook for Chief of Naval Operations Admiral Gary Roughead.

Then she got out of the Navy, went to Norfolk State, couldn't find a job, fell behind on her rent, and ended up sleeping on a mattress in the back of her car.

"You know what, it can happen," she said. "I was watching Oprah years ago, and there was a homeless veteran and I said, this will never happen to me."

But it did. Only now, Yasmine has some hope. Two weeks ago, at wit's end, she e-mailed WVEC-TV. The television station directed her to call Willard Smith at VetsHouse in Virginia Beach. And, as fate had it, the non-profit just happened to have an open bed space.

"Maybe it was divine intervention," said Smith. "When she called me and said she had spoken to you, I was kind of taken aback. That's the first time somebody dropped your name and it felt good."

While moving in on Monday, Yasmine continued the story: "I called the station, they connected me to you, and you told me about the VetsHouse and we're here today," she said.

This was day one of a 12 month residential program. Yasmine is grateful things have worked out so far, and she vows when it's over , to fight for fellow homeless vets.

"Homeless veterans are not just the ones with PTSD, the alcoholics, the bum on the street," she said. "It's the college students, it's the school teacher, the lawyer. We have to do better with our veterans, especially the women."

Yasmine said this has been a true learning experience. "I now know why a lot of veterans contemplate suicide. A lot of them may lose hope. And this is a place of hope, the VetsHouse, and I'm grateful for that."

Since 1992, the non profit, 501-c-3 VetsHouse has helped more than 700 veterans; 71 percent have successfully completed the 12-month program. They opened the women's residence two years ago.